An epic fable that presents the best and worst of India 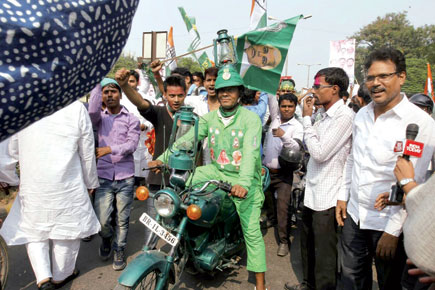 The line—‘It was the best of times and it was the worst of times’—at the beginning of Charles Dickens’ wonderful novel, A Tale of Two Cities, serves as a perfect statement to the Bihar election. The campaign always had an epic quality of struggle and yet it was marred by the banal, the calculative and the hypocritical as two stalwarts confronted each other like giant hoardings.

It was at one level presented as a Narendra Modi- Nitish Kumar battle; between two opposites who were strange bedfellows till a few years back. Nitish was a BJP ally during the 2002 riots and after, a votary of development who virtually absorbed the party’s ideas. Both Modi and Nitish are authoritarian figures and Lalu becomes the third of this dictatorial trinity. Fascinatingly, democracy domesticates all three subjecting them to the rules of the game called elections.

One is proud of the equalising power of democracy but this was also a democratic battle at its worst with caste and communal dialects becoming the flavour of the day. Modi began on the development plank but half way both groups showed their true colours. One saw the return of caste as the true idiom of politics. Sadly, also came the realisation that the old models of socialism, the dreams of Lohia and JP, are long over. What we have in Lalu and Nitish is a populist authoritarianism where the language of reservations substitutes prosaically for the dream of socialism. The Bihar elections, once again becomes an epic fable, presenting the best and worst of India.

Watching the elections at a distance, one perceives the desperate need for change and stability. Words like development or governance are synonyms for change yet they become almost alien words suffocating in the world of caste. There is a sense that government is the biggest job giver and reservation the way to employment, so caste is the only real language and currency of power. Change is still a rhetorical word in Bihar and what little we had in Nitish’s time was the promise of stability, the decline of the Jungle Raj. Yet, oddly, even the Jungle Raj is seen with a touch of nostalgia. The lower castes see the Lalu era as a time of freedom, even licence, while upper castes saw it as oppression, quite forgetting the violence of the Ranvir Sena.

Lalu, in fact, is re-read in this election not as a clown but a grassroots politician who protected the dignity of Bihar, a quixotic role he plays with ease. In fact one sees a division of labour, with Nitish playing upstream politics holding a coalition together while Lalu being the local yokel cum don who provides the votes and the grassroots organisation. The biggest beneficiary is the Congress which collects quite a few electoral droppings on the way, sufficient to feel relevant. There is a tinge of sadness to see a great party content to be a footnote in an election. Its self-congratulatory pats and claims to be a guardian of the secular appear pompous and hypocritical. But it might give Rahul Gandhi a fresh lease of life by showing he is still capable of a few votes riding piggyback on regional dons.

The split-level nature of the campaign was also intriguing this time. Nitish was on the backfoot as long as BJP played straight bat with development. The campaign then appeared like the extension of the national development agenda to Bihar and yet this new Victorianism was too much for the party. Mohan Bhagwat spoilt the show by talking of the necessity of reviewing reservations. In itself and at a different time the demand would have been innocuous. But in caste-fetishised Bihar, where reservation is a lifeline, it was literally blasphemy and politicians desperate for any straw pounced on it.

The RSS might have gifted away the election at that moment. Lalu swooped in on it as a sign of BJP desperation. Suddenly an array of casteist politicians could appear like constitutionalists offering drawing room answers on how to play the electoral game within the specified limits of the Constitution. A touch of hypocrisy is necessary for populist politics. It allows everyone, especially casteist parties, to appear normative. An election without hypocrisy is an impossible drama in Bihar. For all its planned strategy, the BJP, which had a clear edge through the first half of the electoral narrative, spoilt the script for themselves. Nitish must be grateful for this gift.

There is also the absence of a certain assertiveness by the Election Commission, which seemed to be part of a silent movie while Bihar politics a cascade of noises. Also, elections seem more and more a numbers game, where the chartered accounts of caste dominate and acronyms add to the superficial mystique while a watcher from Delhi wonders whether Lalu has both OBC and EBC. The world of concrete castes like Kurmis, Yadavs, Chamars gets lost in the acronyms as abstractions. Gradually one realizes that words like development, governance are still phenotypical, that caste is genotype, the DNA of Bihar politics. That is the paradox of Bihar politics—promising change but never altering the idioms of politics.

It reminded me of the hologram keychains popular at one time, giving two contrary images with a flick of the hand. Image one of Bihar messages governance, change, the skewed sex ratio; the flip side immediately shows the ground realities of caste calculations. It is almost as if the fragmentation of caste does not allow for holistic change. To go beyond caste in government language is to be Naxal, someone who challenges caste idioms and is therefore anti-national. Language has ironies which convey the paradoxes of caste.

The election leaves one with mixed feeling, as if watching a many layered wonder. It is a major enactment of democracy but at another level it promises change but offers little on the ground. It reminds one of an old army slang: SNAFU, Situation Normal All Fouled Up. It was a word coined by US soldiers who had to dig pits and then fill them up. The Bihar elections convey that democracy and caste are normal and so India is fouled up.

The spectator has to wait and watch to understand what might follow. Politics in India is often a ritual of waiting. There is also the fetish of numbers that deceive. As Modi was off to a headstart, experts were changing analysis to suit the winds of change. We criticise astrologers when psephology is a less predictable game.

Various twists were given to the election. First was Modi’s attempt to smear Nitish by saying he is planning to use reservation quotas for Muslims. Nitish was not far behind in his attempt to play the Bihari/Bahari game, especially resonant after the way Biharis have been treated in Mumbai. Each is playing the language of the parochial against a secular idea of citizenship.

One watches Lalu in sheer wonder. He seems to be the perennial politician unfazed by jail and the fodder scam, campaigning with enthusiasm with his two sons, Tejashwi and Tej Pratap. He waves them around like flags playing dynastic politics so blatantly that the Congress must be wondering what it got wrong.

One of the questions of this election is whether women and youth have created a new trend. Bihar has a skewed sex ratio with men part of the migratory nation. Has this led to any change? Do women behave autonomously? The word aspiration is associated with youth. One wonders whether youth will go beyond caste or rely on reservation as a ticket to the future till one realises caste-refracted development is still the majoritarian way in Bihar’s election. Change in Bihar, despite all the hype, still comes through the prism of old idioms.