A terrible beauty is to be born 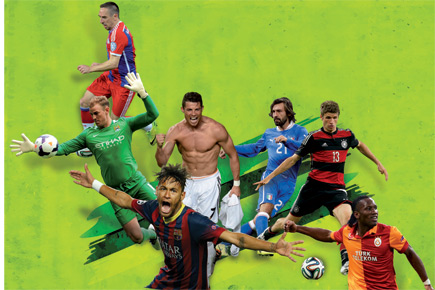 Brazil is the absolute top favourite for winning the title this year. It has won the World Cup more often than any other country—five times, that is—and is hosting the World Cup to boot. Home support will strengthen its ambition. But high expectations could also prove to be a burden, putting a lot of pressure on Brazilian players, who will only be successful if they combine the offensive quality of their play with a defensive discipline that is not too popular in a country where the joga bonito—beautiful game—is all that counts.

Germany has never been known for playing beautiful football but has been consistently successful as a team. All this changed, more or less, with the 2006 World Cup it hosted. Since then, the offensive philosophy of its play has impressed spectators all over the world. The team , however, has not won a major title since 1996’s European Championship. Germany could prove itself ready for the World Cup title this year.

Spain, the current title-holder, benefits from a ‘golden generation’ of players that have won every major title since 2008—the European Championship twice, apart from the World Cup four years ago. The team, therefore, is automatically one of the top favourites for winning this year’s title as well. But nothing is more difficult than attaining perfection twice in succession, adapting a team that has won everything to new challenges, and sorting out footballers of a golden generation who might not match the competitiveness of younger players anymore.

For a country its size, it’s remarkable that Belgium has competed in 11 World Cup tournaments, even if it hasn’t been able to qualify since 2002. Its team captain 12 years ago, Marc Wilmots, is now manager of the national team and has unified players as well as spectators in a country that has seen its Flemish- Walloon divide widen vastly since 2007. In a best-case scenario, the footballers of Belgium could win a whole lot more than just points and matches.

When this team succeeded in qualifying for the 2014 World Cup, the whole country burst out in excitement. It will be their first participation ever in a World Cup. Every goal its team scores, every point it gains and every match it wins will write history. Recovering as it is from a recent flood disaster, its players might help ring in some cheer. In its group, Argentina, of course, will be the top favourite. But it could well end ahead of Nigeria and Iran and even qualify for the next round.

The Group G match between Germany and Ghana will see a rather unconventional fraternal duel. While Kevin-Prince Boateng will play for his father’s home country Ghana, his half-brother Jérôme Boateng represents their common native country, Germany. Both Berlin born and raised players will meet again after 2010 on a World Cup pitch. The last time, Germany won 1-0, and the rivalry was intense as Kevin-Prince Boateng was reviled for having injured the German team captain Michael Ballack in that year’s FA Cup final, causing the latter to miss his last World Cup.

As goalkeeper and captain of the Spanish team, Iker Casillas is one of the key players of this tournament. He has led Spain to three major titles in a row: the 2008 and 2012 European Championship and 2010 World Cup. But he lost his position as leading goalkeeper in his club team Real Madrid playing only Cup and Champions League matches. An error he made in this year’s Champions League final almost cost Real Madrid the title. So, all eyes will be on whether he will prove his skill or display some insecurity.

The 2014 World Cup will be Miroslav Klose’s fourth and last. Since 2002, he has been Germany’s best striker, scoring 14 goals in his three previous tournaments. If Germany’s veteran striker scores another goal, he will equalise the Brazilian Ronaldo’s goal record of 15 World Cup goals; a second goal would assure him the record as leading all-time goalscorer all for himself. But being the team player he is, his mind will likely be on his team’s score rather than his own record.

Unlike other major football countries, England has no long and glorious tradition of great goalkeepers. On the contrary, their goalkeepers in the 2002 and 2010 World Cups displayed some of the worst mistakes in the history of the game. It might also seem a logical consequence that England had to exit the 1990, 1998 and 2006 World Cups on penalty shoot-outs where the goalkeeper’s instinct and skill count for rather a lot. Manchester City’s solid Joe Hart, therefore, could become a national hero by just doing a good job. Else, he might end up as another chapter in the doomed history of English goalkeepers.

Many claimed that Franck Ribéry deserved the FIFA Ballon D’Or in 2013 after having led his team Bayern Munich to a historic treble. That football is a team sport is neglected in France, where Ribéry isn’t as popular as he’d deserve to be. Others are celebrated for easy goals that he skillfully prepared. In recent years, Ribéry has evolved from the artistic footballer he’ll always be to a hard-working team player fulfilling defensive work that’s as crucial as offensive action. It makes him a true master.

Neymar da Silva Santos Junior has been one of the stars of world football for some years. The 22-year-old striker of FC Barcelona led Brazil to last year’s FIFA Confederations Cup victory. Now, Brazil fans are all excited about his long-awaited World Cup debut in his home arena. If everything goes well, he might become the star of the tournament. But it won’t be easy to fulfil everybody’s high expectations. His childhood dream of playing a World Cup match at home and winning the trophy that means everything to his nation could easily turn into a nightmare.

The 2010 World Cup marked his first participation. Some, like Diego Maradona, didn’t know him at all and had to learn fast (as Argentina’s coach). Müller scored after only three minutes of play in Germany’s quarter-final against Argentina. He finished the tournament winning the Best Young Player Award as well as the Golden Boot as top scorer. Never has a player won the latter honour twice in a row. Thomas Müller could well be the first.

When Italy won the 2006 World Cup held in Germany, Andrea Pirlo was the mastermind of his team’s game. The ingenious midfielder tends to initiate Italy’s dangerous offensive moves and he keeps his defence under control. Towards the end of his career, he has led his club team Juventus to a tremendous league record and has a private vineyard to which he’ll retire after his football career ends. Watch him closely. For Pirlo himself is like good wine, getting better with age.

The striker was awarded the FIFA Ballon D’Or in 2013 after having been beaten to it several times by Lionel Messi. Many claimed that Franck Ribéry was more deserving of this ‘best player’ award for being a better team player. Ronaldo’s ego is said to be bigger than most other players in this year’s arena. He is undoubtedly one of the best individual players in the history of football, but this is a team sport. Ronaldo hasn’t won anything with Portugal, just as Portugal hasn’t won anything with this world star in its team.

Didier Drogba is a legend not only in his native country, but across the continent of Africa. He has exemplified courage by using his immense popularity for political purposes when his home country was about to turn to civil war . His career is about to end; this will be his last World Cup. Nobody knows what Ivory Coast and Drogba could achieve this year. But watch out for this great footballer as he bows out.