About those who came to see the Women’s World Cup 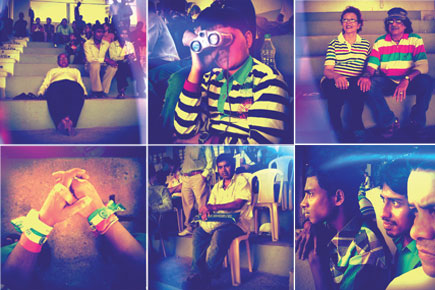 About those who came to see the Women’s World Cup


It is two in the afternoon, half an hour to the start of the ICC Women’s World Cup tournament. Only a handful have turned up at Mumbai’s Brabourne Stadium to watch the first match, a day and night game between India and West Indies. They are outnumbered by far by the policemen at the gate (there must have been at least 20) and the youth handing out promotional material (posters and hats with sponsor names). With about 15 minutes to go, some of them set about tackling the ‘standee’ cutouts of players, which refuse to stand. To keep them from falling, strands of discarded rope are found and the cutouts secured to the gate. It all looks a bit comic and soon curious onlookers gather at the scene. When they learn it’s a women’s cricket match, they say ‘Oh’ and leave.

Much has happened in the world of women’s cricket in the past few weeks. With the Shiv Sena issuing threats against Pakistani players, it was uncertain if the tournament would even be held in India. The Pakistani players and their games were moved to Cuttack (they have been put up in the stadium complex for security). And the venue for this marquee tournament in the city was shifted at the last minute—from Wankhede to Brabourne—just so that a domestic tournament final (Ranji Trophy) could be played at Wankhede.

The facilities provided the Indian team have been inadequate, to be mild. A few local newspapers reported how the team was initially put up in a three-star hotel (Sea Green on Marine Drive), and how every time they needed practice, they had to walk from the hotel to Wankhede. The difference was that perhaps for the first time so much newsprint was being devoted to the tournament.

Through the course of the match, small numbers continue to troop in to the stadium, many for reasons other than watching the game—there is a man whiling away the hours before catching a night bus to Indore, and a couple of lovers in a corner who are here presumably because it is more private than any other place they could find. One man suddenly rises from his seat, at some point in the course of the game, and says to himself: “Arey, yeh toh ladki log hai” (Oh, these are women.)

The spectators are only allowed to sit in the North Stand. And with the sparse attendance, and minimal cheering and noise, the stadium bears an air of bereavement. At some point, two buses arrive, carrying children from NGOs and nearby schools. And for the first time, a queue is formed to get in. The children are made to jump and scream, and hold aloft posters and hats with company logos as if an unimaginable happiness has struck their lives. As they do so, pictures are taken for company presentations. After these brief moments of manufactured happiness, the kids are left to themselves, and they start running around and playing hop, skip and jump in the pavilion.

It’s a bit of a shame really—because a wonderful cricket match is in progress. The batters very rarely muscle the ball over the ropes; they mostly rely on timing and placement. When they drive the ball, their high elbows and full follow- throughs look elegant. And with the sky turning pink and the green ground shimmering under the floodlights, Brabourne is a sight to behold.

Among those gathered is a soldier from Jammu, who refuses to give his name. He has recently been transferred to Mumbai and is taking his wife out. Under an impregnable layer of face powder, foundation and rouge, the wife says she forced her husband to accompany her to the match. “I had just served lunch when I saw on TV that India were batting. Maine unse kaha, ‘Chalna hi hai’ (I told him, we just have to go.),” she says.

Some distance away, a lone middle- aged man is watching the match. Sitting on two pages of a tabloid, the rest of the paper folded under his arms, he identifies himself as Jayan Menon. I am to see him at the next two matches too. Menon is a 54-year-old women’s garment importer and a regular at Wankhede and Brabourne stadiums. Today he is a little irritable because an overzealous security policeman almost did not allow him to carry his metered-dose inhaler for asthma, fearing it might contain tobacco. He lives in Panvel and runs a store in Crawford Market. “Today, I knew the match was on. I have never watched women play cricket before, but this, after all, is a World Cup tournament,” he says. So by 2 pm, he had wound up work so he could attend the match. One 59-year-old, who has also turned up, turns out to be the projectionist of Liberty cinema. “I’d brought Rs 300 with me. If it cost more than that, I wouldn’t have come. Women’s match after all, ya,” he says, opening his mouth just wide enough for one to see he is missing most of his lower set of teeth.

Towards the end of the Indian innings, a number of youngsters troop in (mostly students from nearby colleges). When the No. 3 batter starts hitting a few lusty boundaries, they start chanting “Mithali Raj! Mithali Raj!” Raj is perhaps the most popular name in the team. A regular No. 3, she is the team’s captain and currently the world’s top ranked woman batter. They continue to chant her name, oblivious to the fact that the player at the crease is not Raj but Jhulan Goswami, who at 5’11’’ is quite easily identifiable.

Day 2. A thriller of a match takes place between England and Sri Lanka, with a last ball six enabling the Sri Lankans to cause an upset. When batter Dilani Manodara hits the winning six and slides on the ground, and her teammates rush in to mob her, it looks a bit farcical because the stands are near empty. You could count the number of spectators on your fingertips.

With the turnout being what it is, the policemen hardly conduct any checks, and even water bottles, restricted till the previous day, are allowed in. While watching the match, one fellow remarks to his friend, “In olden times, kings only rode female horses because they were faster than the male ones. What’s wrong with this lot [of cricketers]?”

Most of the spectators are college students bunking class. With little interest in the proceedings, a group of six from Jai Hind College, 16- and 17-year-olds, follow the only celebrity they know—Sanjay Manjrekar, who is commentating for the matches. They take pictures with him and when other spectators move in on cue, Manjrekar starts flapping his hands and shaking his head, and runs to the media room. Back at a loose end, the group of six sneaks into the ground while the match is on. A guard spots them before they can cross the boundary line, and they are ushered back into the stands.

When the match gets over and a few spectators linger to chat, a security fellow walks up to them. He yells, “Ho gaya na, bas? Khali peeli time waste kyon kar raha hai?” (It’s over. Why are you wasting time?) and they immediately leave.

Day 3. The queue snakes from the stadium gate to nearly the end of the road. Tea and snack sellers and Indian flag painters (for faces) have suddenly mushroomed at the gate. Inside, the North Stand is chockabloc with spectators. Some are here with their families for an outing, clubbing the match with a visit to the ongoing Kala Ghoda Arts Festival; others have come alone. It is a Sunday, and the close finishes of the previous two games have stoked interest.

Among the people who have turned up on this Sunday is a 60-year-old barber named Ashok Venkat Tukaram. He looks a bit like Anna Hazare, but he has a more striking visage, what with his shaven head, little or no neck and a shirt buttoned up to the collar. Conversations with him are peppered with “shot, shot” (every time someone hits a boundary) and “Oh” (intoned with flourish, hands on face, every time anyone comes close to getting out). Tukaram runs a small salon near Regal theatre and claims to have hair-dressed many Maharashtra politicians. Among his more famous patrons, he claims, was the late former Chief Minister of the state, Sudhakarrao Naik. Today, he has taken the day off to watch the match. “I didn’t know, until today, that women’s cricket matches exist,” he says, unwrapping a Marathi newspaper that has highlighted the match in its listings column.

Sitting close to him are a father and son who have come from Panvel to see the match. A cripple from Haridwar, who has come to the city to get a prosthetic leg made, is also there. It’s like the stadium gate today leads to a parallel universe. Each run is cheered, spectators dance when the ball crosses the boundary, drumbeats punctuate proceedings. A retired couple from Andheri are also watching the match. It’s the first time they have come to a stadium. The wife, Joan Rocha, says, “We’d heard the stadium would be close to empty. So we came here thinking we’ll have a nice quiet Sunday.”

India have been set a target of 272 to win. They bat the full 50 overs, but fall 32 shy of the England total. As the spectators leave, Joan Rocha and her husband Rochester wait for the stadium to clear out. Someone taps Rochester’s shoulders from behind. The security fellow from the previous day is standing beside two policemen. He says, “Tumhara din toh waste ho gaya na? Ab mera waste mut karo.” (You wasted your day, right? Now don’t waste mine.)