Finally, a man whose parents named him right 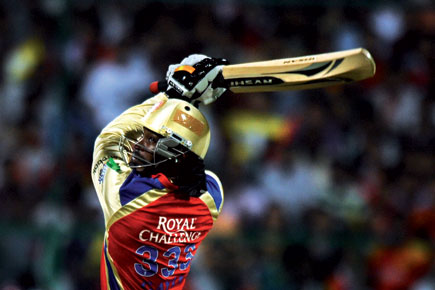 Finally, a man whose parents named  him right


Saturday, 27 April. The Mumbai Indians are playing the Royal Challengers Bangalore at the Wankhede stadium. Mumbai bat first. Chris Gayle is the lone slip. But it could very well be a satiated boa constrictor (in an orange cap). He is fit—prize fighter torso and narrow waist—yet he is sluggish. He is sluggish, yet he is a match-winner.

He is a modern-day Mohinder Amarnath. Amarnath, despite being zealous about his fitness regimen, always looked as if he had had one serving too many of dal makhani for lunch.

Stupor defines nearly all of Gayle’s movements. He can wrap up an episode of Walk the Talk with Shekhar Gupta by the time he takes a single. While fielding, he does not worry about saving runs unless it is an easy stop. Why deny the ball the pleasure of running into the arms of the sponsor logos at the boundary? Much easier to wipe out the deficit with a six. When ends change, Gayle is among the last to reach his new position. He shows no hurry when he takes off his cap to smooth down his hair.

But when he bats, the 33-year-old is explosive. The match changes in a few shakes of his tail. T20 is today cricket’s most economically viable format, and Gayle, its deity. Or ‘World Boss’, as he calls himself on Twitter. Top scorer IPL 2011? Chris Henry Gayle. Top scorer IPL 2012? Chris Henry Gayle. One of the key components of West Indies’ victory in the World T20 last year? Gayle again, thank you. (Though not as dominating as he has been in the IPL for Bangalore, Gayle was the fourth highest run-getter of the tournament.) He has eleven hundreds in this format. In this year’s IPL, he has already scored an innings that is a milestone in the short but significant history of T20. Yes, the bats these days are like turkeys fattened for a feast, the bowlers are restricted by rules and quotas and often there is little in the wicket, and so on. But even accounting for all this, 175 unbeaten runs in 66 balls is special. When Gayle is in this mood, there is little a bowler can do unless he has experience, guts or the ability to move the ball. Only two Pune bowlers kept Gayle somewhat quiet. One was Bhuvaneshwar Kumar, who is among the most important finds for Indian cricket in recent times because he can do something that rattles all batsmen—move the goddamned ball at speed. The other was Luke Wright. “Life is all about taking the right decisions. Seeing Gayle bat today, I think I took the right decision [by] being a wicket-keeper,” Mahendra Singh Dhoni tweeted after the innings.

Mumbai was Bangalore’s next match. And Mumbai had the experience and weaponry to exploit the few weaknesses Gayle has. One of them is his vulnerability at the start. In addition, the weight of expectation can weigh down even NFL-size shoulders like Gayle’s. It had affected him in the World T20 final against Sri Lanka. It was partly responsible for his cheap dismissal in Mumbai too. The Mumbai crowd is loyal and they only know one mantra (‘Sa-chiiiin, Sa-chin!)—though on this humid Sunday, there were a good number of ‘R-C-B! R-C-B!” chants. Also, Mitchell Johnson and Lasith Malinga on the bouncier track of Mumbai were going to be a sterner test than the Pune attack, which is nowhere near as potent.

Mumbai set Bangalore a target of 195—a ‘Gayle-proof’ score according to a television channel. Gayle looked out-of-step from the start. He did step outside the line for room to smack Johnson to midwicket for six and there was a four straight over the bowler’s head. But in between there were some curious, almost amateur strokes. A short ball from the wily Malinga caught him stranded on the front foot and all Gayle could do was fend at it weakly. And there was a soft, casual slash, which, luckily for him, fell in no man’s land. It was a matter of time before Gayle got out. When he perished, it was from a skier so high, the ball came down with images of Mars and landed in the hands of Ambati Rayudu. It was a terrific catch. Harbhajan Singh was the bowler and he broke into Gayle’s signature Gangnam-style jig to rub it in. Mumbai won easily. RCB have no reason to panic. They are still in second position in the points table. But Gayle must know that while he may have won many individual honours in the tournament, ultimate satisfaction for him and his employers, who are said to pamper him, will only come from the trophy.

Any conversation about Chris Gayle and his importance in West Indies’ cricket seems incomplete without a mention of another pre-eminent left-hander from the same country. Gayle made his debut just about a year after Brian Lara had inspired the team to a 2-2 draw at home in the Frank Worrell Trophy against Australia, then at their peak. West Indies were no longer what they were in the 1980s but they had Courtney Walsh and Curtly Ambrose and they had Lara, a genius, with a blade that flashed like the sword of a Samurai warrior. Lara remains the record-holder for highest individual scores in Tests (400 not out against England) and first-class cricket (501 not out for Warwickshire against Durham). Along the way, he essayed other legendary innings, like the 277 against Australia in Sydney and the matchwinning 153 not out in Bridgetown during the Frank Worrell Trophy mentioned earlier.

As a batsman, Lara is avenues ahead of Gayle. He has 34 centuries and a 50-plus average (52.88) in Tests, a format that is withering but remains the foremost yardstick to measure a player by. Gayle has 15 Test centuries and an average of 42.45. Lara faced great bowlers for a longer stretch of time. Australia had the firing squad of McGrath, Gillespie and Warne. Wasim Akram and Waqar Younis were still playing for Pakistan. South Africa had Allan Donald. Gayle has also faced some of these bowlers but not as much as Lara. Lara also led West Indies to victory in the 2004 Champions Trophy, the nation’s first major limited overs trophy since the 1979 World Cup. Gayle was a part of that team.

Gayle has done enough on his own to secure a place in the West Indies’ Hall of Fame, however. He too has shown Lara-like application at the crease and is one of only four players ever to score more than one Test triple century. Besides, he has got most of his runs as an opener, while Lara mostly batted at No 4. Gayle is also a useful bowler, with almost 250 wickets across three formats. And if the 2004 Champions Trophy ended the West Indies’ trophy famine, it was only the 2012 World T20, when Darren Sammy was captain, that ended the country’s 33-year wait for a World Cup. Besides, the boa constrictor is not fully sated yet, even if it looks that way sometimes.