How famously reclusive Ajit Tendulkar agreed to step into the spotlight 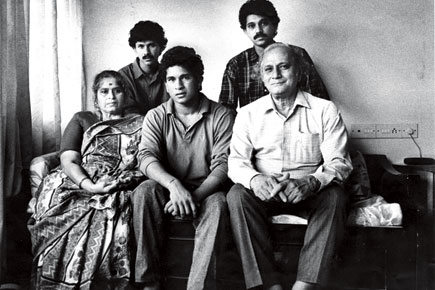 How famously reclusive Ajit Tendulkar agreed to step into the spotlight


A few months ago, an intriguing Union Bank hoarding went up in different parts of the country. It featured Ajit Tendulkar, Sachin Tendulkar’s famously reclusive older brother, now reminiscent of Moses. Ajit wore abundant, defiantly grey hair and a luxuriant beard. He smiled not more than Mona Lisa. He was dressed in a crimson FabIndia-type shirt and beige pants. Accompanying the image was the line: ‘When Sachin Tendulkar dreamt of becoming the best batsman in the world, so did Ajit Tendulkar.’ At the bottom of the hoarding was the campaign’s main slogan: ‘Your dreams are not yours alone.’

Ajit Tendulkar in a commercial? That doesn’t happen every day. Hold on, that doesn’t happen ever. Ajit avoids attention. He should have been called Ajit Salingerkar. Mindful of this, two of his friends declined to be interviewed for this article. In life, Ajit did what he had to do—spotted gold in baby brother, showed baby brother the way—and then stayed behind the scenes. He retreated to his world of music (rock and roll, retro Hindi), cricket (mostly on TV, without commentary, and no newspapers please), friends, several cups of tea, elegant clothes and fitness (according to a production person on the Union Bank shoot, he was into martial arts). Public appearances were kept to a minimum. In 2006, when Sachin was felicitated by the Marathi Patrakar Sangh at the Yashwant- rao Chavan auditorium in Mumbai, Ajit didn’t want to go on stage even to collect a bouquet of flowers. It was only when the host requested him that he surrendered the safety of his seat in the dark and endured the bright stage lights for a few moments. Ajit’s hermetic appearance—he’s almost always had a beard and long hair—added to his mystery.

Hemant Kenkre, a club cricket contemporary of Ajit’s and known to both brothers, says, “I don’t know about shy, but he was always quiet. I remember him from the time he played for Jolly Cricketers in the Kanga League ‘A’ Division and for Ruia College in the inter-collegiate tournament. As a batsman, he was a copybook player. Good enough to play in the ‘A’ Division in an era when greats like Gavaskar and Vengsarkar played the Kanga League. Now we meet once or twice a year for a drink or meal.  When he’s with us, he opens up. We avoid talking about Sachin. We talk about our times instead.”

Now, by appearing in a commercial, Ajit had finally revealed a bit of himself to the outside world too, a world which for years had been curious about him. He had made a great discovery in Sachin and then gone away. Unlike, say, Steve Jobs, he hadn’t worn a black turtleneck and held up a young Sachin before the world. Through this ad campaign, we at last saw a little more of him. To add to the random bits and pieces we had seen of him during work or just by coincidence. Like once in 1992, when Sachin was in Australia playing his first World Cup, and Ajit, in a Maruti 800, was talking to friends in Sahitya Sahawas, the stereo playing Bryan Adams. Or being taken by a colleague to meet Ajit in his office at Mumbai’s Air-India building to request an interview with Sachin. Or spotting Ajit driving down Mumbai’s Mahim Causeway in a limited edition, canary yellow Fiat Palio, bearing the signature of his brother. Or Ajit, after great persuasion by an influential magazine proprietor, agreeing to a telephone interview and responding with even-toned sarcasm to an almost bold question about Sachin’s batting. “I have not seen anything lacking in Sachin’s batting of late. But if you have, then maybe….” Not exactly these words, but something along these lines.

For Union Bank and Mudra, the agency which shot the ads, landing Ajit was a casting coup. He was one of four close relations of achievers to feature in the campaign—the others being Aruna Anand (chess champ Vishy Anand’s wife), Kareema Rahman (musician AR Rahman’s mother) and Manoj Singh (boxer Vijender Singh’s brother).

Aman Mannan, senior creative Director, Mudra, says, “Ajit liked the script and the idea of family values. In India, even if we live in nuclear families now, everyone is there for the other person. There’s a reason why Rahman goes to the Oscars and says ‘Mere paas Ma hai’. Whatever people have achieved has to do with people around them. Hence the slogan: ‘Your dreams are not yours alone’.”

We were sitting in a glass cabin in the agency’s office opposite the Grand Hyatt hotel in Mumbai. Mudra House is a typical contemporary office building, a huge glass structure in the middle of a mostly arid expanse. Mannan, whose droopy eyes lend him a slight resemblance with Ranbir Kapoor, sat in a chair. To his right, in another chair, was Ashish Phatak, also a senior creative director. Wedged between the two, slouched on a low bean bag, was Naresh Parmar, group director, brand communications. Now and then they acknowledged someone passing by the glass cabin. Once they asked a cafeteria staffer to get “water, on the rocks.”

Parmar said the mission of getting Ajit on board began with an approach to Sachin during the England series last year. The themes of Indianness and family responsibility were bound to find approval with the conscientious Tendul- kars. First hurdle crossed, Mannan and Phatak spent time with Ajit to break the ice. They met at MIG Club in Bandra, a sixer away from Sahitya Sahawas colony, where Sachin grew up and Ajit still lives.

“He has lots of tea,” says Mannan. “He has the [same] twitch like Sachin (jerks his shoulders), he has similar eyes. He doesn’t read newspapers. Likes listening to Pink Floyd. He has his own way of following cricket. Watches matches with the commentary turned off. Doesn’t go to the ground much. One of the few times he did was when their father wanted to watch a match at Wankhede (during the 1992-93 series against England).”

Phatak says, “Ajit spoke to us about the early days, the effort Sachin invested.” Mannan says Ajit derived satisfaction from the way Sachin’s success led to the improved health of Indian cricket in general.

From the standpoint of the commercial, Ajit’s heavy beard may have compromised his recognisability. But the agency did not want to tamper with it. Phatak says, “He likes his beard and was worried he’d have to trim it for the ad. But we were fine with it.” Mannan says, “That’s who he is. And [the look] is cool. He’s like a fit rock star of about 50, or a retired tennis player. He could very well be Bjorn Borg.”

Meanwhile, in England, India were being reduced to train wrecks. But Mannan’s joke about India’s batting was greeted with silence. “He may have found it funny, but he didn’t say anything. Because it could have been misconstrued.”

The print advertisement was shot in a studio, the film in an old bungalow in Vile Parle East, a predominantly Maharashtrian locality. “We wanted something quaint [for the interiors],” says Mannan. “We wanted it to be a representation of the world Ajit comes from—books, wood [furniture], chai, and since it’s Bombay, we wanted rain.” Ajit is shown making tea (no milk), standing in a balcony and stretching his left hand out into the downpour. He reads from Pavsaala (Monsoon), brother Nitin’s book of poems inspired by rain. Later he sits down before a computer, scans newspaper clips of Sachin’s exploits, and jabs at the keyboard. ‘1971 was a remarkable year for Indian cricket,’ he types. And leaning back into the chair, smiles at the camera, a solitary man at last returning the gaze of the masses.