At 26, he became Nagaland’s first cricketer to play the Ranji Trophy 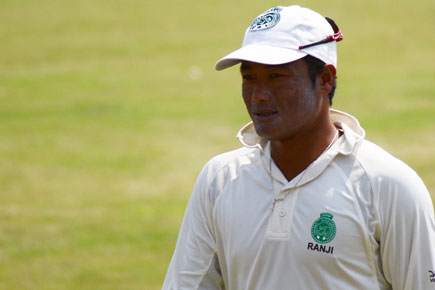 At 26, he became Nagaland’s first cricketer to play the Ranji Trophy


The outer hostel of Kolkata’s hallowed St Xavier’s College bears a distinct uniformity. Here, students study either science or commerce. Every table is on the verge of collapsing under heaps of books. And each room has walls that are just three-fourths the roof’s height, so a student who is smart enough to latch the door but not discreet enough to hang himself quietly can be saved.

However, the unspeakable horror of which students were informed one afternoon in 2004, as they gathered in the hostel mess, memorising passages over lunch for an exam, was a lot less familiar. “He keeps his shoes on the table,” said an inmate.

The ‘he’ was a Naga student, the shocked inmate’s new roommate. And he did not have just shoes on his table. There were helmets, cricket bats, balls and pads of various kind. A few of the hostel’s Northeastern students struck up a conversation with him, but they returned with puzzled expressions. For, Hokaito Zhimomi was that rare species—a Naga cricketer.

On 2 November, when the Ranji Trophy tournament started with an unusual buzz, what with so many cricketers of the national team turning up to play in the opening matches (including Sachin Tendulkar who scored a century for Mumbai), a somewhat significant moment went unnoticed. In a match against the tournaments’ two minnows, in the far-flung city of Guwahati, Nagaland threw up its first Ranji Trophy cricketer. It was Zhimomi, a guest player for Assam in a match against Tripura.

Differences between the Northeast and the rest of India are reflected in the sports arena as well. If cricket is religion everywhere else, here it is football. Cricket, in fact, excites almost nobody in the region. There is hardly any infrastructure for cricket, and until earlier this year, Nagaland did not even have a cricket stadium. Barring Guwahati, this is true of the entire Northeast. Meghalaya, Nagaland and Arunachal Pradesh became associate members of the BCCI only five years ago, and while some junior cricket matches are held now and then, they get little attention. Northeastern sports career dreams are made of heading for Kolkata to play for one of its football clubs. Zhimomi was an exception. He looked farther afield. He looked at the sport that gets crowds roaring in the rest of India.

Zhimomi is from Sangtamtila, a remote village in Nagaland’s Dimapur district. As a school student, he would travel to Dimapur town to play cricket on a field that was actually meant for football. While his friends gravitated towards football, he continued to play both sports. Occasionally, cricket tournaments would be organised in Dimapur, and cricket clubs would miraculously appear, he remembers. In the middle of a football ground, in between two goal posts, a green mat would be rolled out to serve as a pitch. Zhimomi performed well in those tournaments and began entertaining thoughts of pursuing the sport as a career.

“Where I come from, there are no academies or coaches,” he says, “There weren’t even proper grounds. We just followed two rules—bowl fast, and hit the ball.” Zhimomi’s father, who runs a construction agency, wanted him to become a government official. But with the help of his mother, he was able to convince his father to send him to Guwahati, where he was told he could improve his skills. After spending a year in that city, he moved to Kolkata to improve his game further. His paternal uncle, Kitto Zhimomi, who was working as an income tax commissioner in the city at the time, agreed to help him financially.

Zhimomi is an all-rounder. He is a right-hand batsman who earlier bowled left-arm medium but now bowls left-arm orthodox. His livewire presence on the field has been noted in almost all departments. Before his Ranji Trophy, his two career highpoints came when he was selected to play for the Bengal Under-19 squad in 2002 and the Kolkata Knight Riders in the 2009 inaugural season of the Indian Premier League. However, he did not get to play any IPL game, and the following year, his contract was terminated. During this period, his father suffered a stroke and he left for home, uncertain if he could ever play cricket again. “At that moment, I thought I was done for,” he recalls, “I thought I would have to take up a job and support my family. But [my
father] recovered well, and I started thinking of playing the sport again.” Once his father’s health improved, Zhimomi moved to what he believed was the city closest to home and where he could play some form of cricket or the other, Guwahati.

In his first match, against Tripura, Zhimomi came in to bat at No 6. He lasted only 16 balls and scored four runs. Assam however went on to win the game by 10 wickets, thanks largely to the performances of its two other guest players—Dheeraj Jadhav who hit 243 runs in the first innings and Jamaluddin Syed Mohammad who scored 89 in the first and took four wickets in the second innings.

According to Zhimomi, commentators in many local papers in Assam recommended that he be dropped. His selection was contentious in the first place. While the other two guest players are recognised faces—Jadhav, who was the highest run scorer in the last season of the Ranji Trophy (704 runs), plays for Pune Warriors in the IPL, and Mohammad bowls left-arm spin for Royal Challengers Bangalore—Zhimomi was relatively unknown.

“Everyone was surprised that a rank newcomer like me was being picked up. I had performed quite well, both with the bat and ball, for a club [called Bud Cricket] in various tournaments within Assam, but people continued to doubt my abilities,” he says. “On the surface, it might appear to be a matter of confidence in a newcomer. But it stems from a more deep-seated feeling that a Naga boy can’t play cricket.” This is a prejudice he has encountered in Assam and Kolkata with dismaying regularity.

In the second match, a low-scoring and closely-contested game against Jharkhand, Zhimomi redeemed himself somewhat. He came in at No 4, and while wickets continued to fall at the other end, he played out 182 balls and top-scored the first innings with 48 runs. Assam eventually won the game by 53 runs.

“It hasn’t been easy for me. It took me over 10 years to even get a look-in at Ranji Trophy. Just look at where two of my former teammates [in the Under-19 Bengal squad], Manoj Tiwary and Wriddhiman Saha, now stand. They have worked hard and deserve it, but I am breaking into the domestic circuit only now,” he says.