The Many Moods of Leander Paes

A star sportsman and his talent for theatre 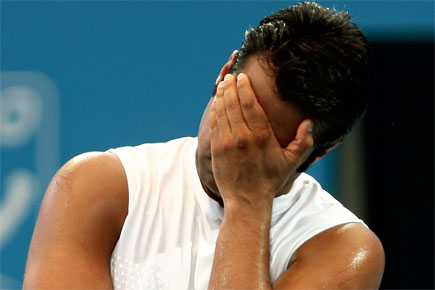 A star sportsman and his talent for theatre


One afternoon in September 1996, at the SDAT Tennis Stadium in Nungambakkam, Chennai, I looked for Leander Paes. I found him on a side court with Mahesh Bhupathi, warming up for their doubles match in a Challenger tournament. Not being Rajinikanth, I decided against marching through the fence. Instead, I pushed open the small gate and walked in.

Paes had just arrived in India after a breakthrough season in the United States. He had won a bronze medal in the Atlanta Olympics, India’s first individual Olympic bling since 1952. He already had several other credits—junior Grand Slam titles, David vs Goliath Davis Cup ties—but it was the Olympic bronze that brought him the big reaction he craved in his home country.

I introduced myself to Leander and asked him for an interview. He said sure, he’d do it after the match. Leander kept his word and we developed a rapport that lasted till a few years ago, when I did a couple of critical pieces on him.

Building rapport came easily to Leander. And he could get emotional quickly. Perhaps the break-up of his parents had something to do with it. I don’t think it was all PR, because he made friends with everyone. Rajeev Asgaonkar, a photographer who did several media and advertising assignments with sports stars in the 80s and 90s, once told my father, himself an art/ advertising professional, how Leander turned teary when a shoot that went on for a few days got over. “We’d gotten so close,” Paes said to Asgaonkar and team. One regular of India’s tennis circuit says Leander carried on his doubles partnership with David Rikl long past the sell-by date because he’d grown fond of Rikl’s family. He also said that Leander ended his partnership with Nenad Zimonjic because Zimonjic once deliberately fired a ball at Martina Navratilova in a mixed doubles match. “When Leander becomes your partner, he also likes to become your elder brother. You have to listen to him even when it comes to the food menu,” this source says. Another friend of Leander’s says, “At heart, he’s an emotional boy. But perhaps he was a boy for too long.”

Subramanian Ganesh, who worked closely with Leander when he was the sports marketing head at Adidas from 1997 to 2004, says the player endeared himself to his entire family, including his ageing mother. Ganesh is an engaging 52-year-old, the kind who once climbed up the rungs of a 30-foot lamp post at Goa airport just because he was curious to see the view from above. On the phone line from Delhi, the current house-husband and single malt lover narrates story after story from his time at Adidas. He chuckles at the memory of a scar he got while escorting Sachin Tendulkar past uncontrollable mobs in Chennai in 1998. “I still have it, below the left elbow.” The ascent up the lamp post occurred in 2000, when he was at Goa airport to receive Leander. Leander and Sachin were to shoot an ad together.

“Leander flew to Goa in a chartered plane from Bangalore, where he was playing the World Doubles Championships. It had been difficult to coordinate Sachin and Leander’s dates. And after Lee landed, he played a prank on me, calling to say he had missed the flight. I told him I’d seen his plane land. There was never a dull moment with Lee.”

Adidas was important for Paes and Bhupathi. It gave the two a lucrative contract in 1997, their first big year as a doubles pair. Along with a hefty principal from Adidas India, the deal included bonuses from Adidas international if they did well in major tournaments. Then, a few years later, Ganesh quit the company. It was Leander’s turn to return the favour.

“Leander was perhaps the first person to call me [after I quit],” says Ganesh. “He said, ‘Hey, if you’re interested, let’s start a brand of our own.’” In 2004, they launched Leeg apparel and sports accessories, ‘Lee’ representing Leander and ‘g’ Ganesh. But after a year, the ‘g’ quit.

Says the ‘g’: “Lee had a larger scheme in mind, he wanted to expand into other things. I did not wish to work full-time. I had my mother to take care of. Also, my wife works for the UN and she would be out of India. So I stepped down.”

But the one year that they worked together, Paes treated Ganesh with respect and generosity. “I didn’t have a car. Out of the blue, Leander bought me a Skoda. Of course, I returned it when I quit.” Ganesh denies their separation was over a professional disagreement.

It is one of the contradictions of Indian sport, and perhaps proof of Leander’s complex personality, that this very personable and charismatic man, who could part clouds of gloom with one bright ‘hey champ, whassup?’ was the reason behind an unprecedented player revolt in the Indian Davis Cup dressing room. In early 2008, Bhupathi, Rohan Bopanna, Prakash Amritraj and Karan Rastogi wrote to the All India Tennis Association that they did not want Leander to captain the team. They said he was publicly critical of them and further undermined them by playing matches they could have won. What began as a falling out between two individuals—Leander and Mahesh—was now affecting Indian tennis as a whole. There was a Bhupathi camp and a Paes camp. Both sides could be paranoid about where your sympathies lay. This held true of both the players and the media.

At the start of the last decade, a lifestyle magazine asked me to do a story on Bhupathi’s rise as a valuable doubles player on his own merit. I did the article, but refrained from ranking the two players. Paes is the better of the two, of that there is no doubt. He is the better athlete and has significant achievements in singles too. But as a doubles player, Bhupathi brought a big serve to the mix. He also played the ‘ad’ court, regarded as the more challenging side as serves from the opposition came to your backhand side if you were a right-hander. There were nuances to the argument, which is why I did not get into the ranking debate in that particular article. But when the magazine came out, I was miffed to see the headline, which suggested that Bhupathi was the No. 1. I let the editor know I did not agree with the headline. I also let Leander and Mahesh know that I wasn’t responsible for the headline. I did not want to belong to any camp.

Two other things intensified the Paes-Bhupathi conflict. The first was the birth of Globosport, Mahesh’s events and sports management company. Globosport signed up major clients, including cricketers, and organised big events, including ATP and WTA tournaments. Mahesh’s importance in Indian sport grew. On the other hand, it brought Paes closer to the Indian tennis administration, which saw Bhupathi’s foray into sports management as a threat. This put the other Indian tennis players in a complicated situation. They had to be in the good books of both Leander and Mahesh, a diplomatic tightrope.

A long-time follower of Indian tennis says, “The best thing Somdev Devvarman has done is that he’s not in either camp, he does his own thing. The sad part about Indian tennis, a small sport striving to go forward, is that there is so much negativity within the community. The Krishnans are the only people who’ve carried themselves with some grace.”

But for all his gifts and achievements, Leander does have an annoying tendency to dramatise things, or bend protocol to suit himself. If you were an honest journalist, these things had to be pointed out. When India played Pakistan in the Davis Cup in 2006, Paes got Mumbai to host the tie so that he could be with his pregnant wife. At a human level, it was an understandable request from Paes. But perhaps it was not the most professional thing to do. I asked Bharat Oza, an official who was part of the decision-making, if Leander’s personal reasons were a factor in the tie being played on makeshift grasscourts at Brabourne Stadium. When he admitted they were, I wrote about it in the paper I was working for. Leander was not pleased.

His habit of exaggerating the odd fact also deserves some hard questions. I found it bizarre when on two successive occasions, he claimed to have beaten a disease he had not contracted in the first place (the condition he had was fairly worrying, but it was not what he claimed it was). To some, this may seem like nitpicking, to me it is not. After double-checking whether Leander had really made the statement, and after confirming that the hospital he was being treated at had certified that his illness was non-cancerous, I wrote a piece criticising him for the statements. I received several congratulatory messages, some of them from key people in Indian tennis. This I took as proof that I had said things that needed to be said. A friend of Paes concedes, “He can be melodramatic, he likes attention and perhaps he’s a bit immature. But are these mortal sins? Let’s also look at what he has achieved with his reasonable talent, and it is something.”

So it is not surprising that Leander’s now getting into cinema. He is naturally theatrical and he loves Hindi films. A fellow journalist and I once interviewed him at RK Studios in Chembur, and as we walked around the space, he pointed in awe at the posters of famous movies that hung on the walls. He also doesn’t mind attention. After he won the Wimbledon mixed doubles with Martina Navratilova in 2003, the heavyweights of the international sports press gathered in the dank press conference room at the All England Club. Unfortunately, most questions were for Martina. Leander was miffed and he let us know, albeit with a smile. “Why didn’t you ask me some questions?” he later asked.

Now, after his victory in the Australian Open doubles, I did want to ask some questions. I sent a text message to his publicist, introducing myself and asking for an interview. Just like all those years ago in Chennai. ‘Yes,’ the publicist replied. ‘Great. How do we go about it?’ I asked her back. There were no further messages.