The Effect on Africa

The investment World Cup 2010 may not yield many tangible benefits. The money, too, could’ve been better spent. So, why are the South Africans so excited about the Cup? 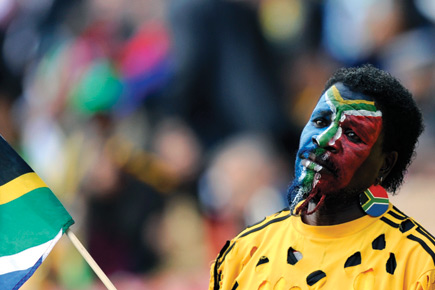 The investment World Cup 2010 may not yield many tangible benefits. So, why are the South Africans so excited about the Cup?


The basis of South Africa’s bid was a resolve to ensure that the 21st century unfolds as a century of growth and development in Africa… This is not a dream. It is a practical policy… the successful hosting of the FIFA World Cup in Africa will provide a powerful, irresistible momentum to [the] African renaissance. We want, on behalf of our continent, to stage an event that will send ripples of confidence from the Cape to Cairo—an event that will create social and economic opportunities throughout Africa. We want to ensure that one day, historians will reflect upon the 2010 World Cup as a moment when Africa stood tall and resolutely turned the tide on centuries of poverty and conflict. We want to show that Africa’s time has come.

President Thabo Mbeki in a letter to Fifa President Sepp Blatter, part of the South African bid in 2003

Fifa, on 15 May 2004 in Zurich, Switzerland, awarded the World Cup to South Africa. It was a historic moment in world sport which resulted in scenes like Nelson Mandela weeping in joy. South Africans celebrated by taking to the streets as if they had not simply won hosting rights, but the Cup itself!

With the Cup just days away now, it’s time to question the true value of hosting the world’s most popular sporting spectacle. Will the benefits touted for South Africa and Africa—economic opportunities for ordinary South Africans, increased tourism in South Africa, and football development and peace and nation-building across the continent—be translated into reality, or will the costs of staging a spectacle of this magnitude further upset the already unstable economic foundations of a troubled nation? Will the stadiums constructed for the Cup turn out to be white elephants once the competition is over, or will they be harnessed for purposes of sport? Finally, will the Cup, as Thabo Mbeki would like it to be, the moment ‘when Africa stood tall and resolutely turned the tide on centuries of poverty and conflict’?

There is little doubt that the awarding of the World Cup to South Africa was a cause for much celebration across the continent. For the host nation, it was hugely symbolic. It marked the culmination of South Africa’s re-entry into the world sporting mix, a process that had started when the country had marched at the 1992 Olympics opening ceremony in Barcelona. As the legendary South African activist scholar, Sam Ramsamy, put it, “It was apartheid South Africa’s re-affiliation to Fifa in the 1950s that united African nations in calling for its exclusion. Now it is the World Cup that will help it take centrestage in the African continent. The tide has truly turned.”

This is also the first time the World Cup has moved to Africa. In fact, one of the central criticisms against the Olympic Games and Football World Cup has been their failure to embrace the world. Never have the Olympics been held in Africa and only recently has the IOC decided to move to Latin America with Rio winning the bid to stage the 2016 Summer Games. Africa’s failure to host either of these mega events reflect for many the continent’s political and economic marginalisation as also the elitist and Westernised nature of these spectacles. World Cup 2010 should serve as a counter. It will present an opportunity to demonstrate that Africa can match the best in Europe in terms of infrastructure, services and organisational ability.

Men and women who study sports seriously have always attempted to draw attention to that unique sporting characteristic when kicking a ball or playing a shot constitutes an act of nationalism. The move of the World Cup to South Africa can surely be perceived as an entire people’s assertion against the forces of injustice, retribution for humiliation meted out by the proponents of apartheid, and finally a statement about what ‘sport’ can do for humanity.

With stars like Didier Drogba or Michael Essien capturing people’s imagination all over the continent, it is evident that, for the first time since Francois Pienaar’s side made history by winning the Rugby World Cup in 1995, all of Africa is united by sport. While Pienaar’s side consisted largely of White players, the football team has helped restore for Blacks their place of pride in the world. Not without reason has the South African government pledged to work with African countries on projects like ‘peace and nation-building, football support and development, environment and tourism, culture and heritage, communication, telecommunication, and continental security cooperation’. This sentiment of cooperation was best highlighted by President Zuma when he suggested that the World Cup would help in ‘alleviating poverty, creating jobs and would result in social upliftment. Not to mention the eradication of stereotypes and Afro-pessimism’.

A voice of caution, though, is in order. As Ashwin Desai and Goolam Vahed have argued recently, the government has spent massive sums on building and renovating football stadiums, with costs rising from an initial estimate of rand

(R) 2.5 billion to R 10 billion by 2008. ‘Overall, the government pledged R 400 billion between 2006 and 2010 for infrastructure development. Much of this infrastructure is geared specifically for the World Cup, and may differ from infrastructure needs related to historic patterns of development and industrialisation.’ The most pertinent example is the The Moses Mabhida Stadium in Durban, which has cost the organisers an estimated R 2.5 billion, when the existing rugby stadium across the road could have been upgraded for a fraction of the cost. To invoke Vahed and Desai, ‘While bid promoters wanted to refurbish Athlone Stadium, because it was located in a low-income ‘coloured’ township,  the host broadcaster was quoted as saying: “A billion television viewers don’t want to see shacks and poverty”. The then ANC-led City Government capitulated. FIFA’s insistence that the stadium have Table Mountain as its backdrop has come at a cost of at least R 2.5 billion.’

Despite these caveats, it must be acknowledged that the hosting of World Cup 2010 has given South Africans a sense of purpose and has inspired them to dream of an apartheid-free South Africa in reality. The football in World Cup 2010 will be well and truly ‘more than just a game’ for Africans.