The DRS and Us

Will India rue the absence of a Decision Review System? 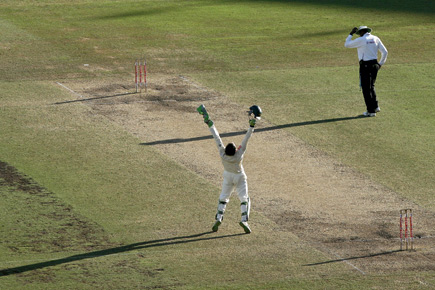 Will India rue the absence of a Decision Review System?


SYDNEY ~ As you read this, the New Year Test in Sydney is well and truly underway, and the absence of a DRS— Decision Review System, to the uninitiated— may have resulted in a few more howlers. The DRS, or its absence, rather, continues to be the real story of the series. Cricket Australia desperately wants the DRS, but they don’t have the numbers within the ICC’s boardroom to make the BCCI accept it. Instead of trying to force the issue, they have chosen the easy way out: improve the technology being used and wait for the BCCI to finally give in. England and New Zealand tried to force the BCCI’s hand at the ICC Executive Board meeting in October 2011, but fell well short of a majority. Money power ruled and the BCCI had the final say.

For one decision that went in favour of India at the MCG in the Boxing Day Test, four vital decisions went against Dhoni and his men. On Day One, Brad Haddin was out plumb lbw to Zaheer Khan in the first Australian innings, a decision which if awarded would have meant the 70 run 7th wicket stand between Siddle and Haddin would not have happened. Hussey, the star of the Australian second innings, was out thrice if the umpires were permitted the use of technology. So much so that some highly influential members within Cricket Australia have suggested in jest that Australia won the Boxing Day test at the MCG thanks largely to the absence of the DRS.

The DRS is like the nuclear bomb—now that it exists, there’s no way you can ignore it, whether you like it or not. It is a reality of life, and you have to accept it sooner or later even if you don’t want to. It is not 100 per cent accurate, no technology ever is or will be. But the technology being used in Australia by the host broadcaster Channel 9 is much more sophisticated and advanced in comparison with the technology used during the ICC Cricket World Cup 2011 or during the India-England series.

A confession is in order here. I am no big fan of technology, but I am forced to concede that its use by the host broadcaster in enhancing the fan experience and its rejection by the men who matter in the middle is reducing the game to a farce. The fan can see the correct decision on his TV screen or on the giant screen at the ground, but is left to feel frustrated because the correct decision is not being made by the umpires. The use of technology by the broadcaster and its denunciation by the teams is turning the viewing experience seriously convoluted. Add to this the fact that the DRS was in use during the Australia-New Zealand series in December 2011. The viewing experience, understandably, was different. In a sport that is struggling to come to terms with diminishing attendance worldwide and is under immense threat from AFL, rugby and soccer in Australia, the least the administrators should strive to achieve is a non-complicated fan experience. The fickleness over the use of the DRS has seriously undermined fandom, cricket’s single most important constituency.

Speaking on the DRS and its use, MS Dhoni was candid in Melbourne: “Sometimes the nick isn’t picked by hotspot and sometimes it is not evident in the snicko either. None of these are 100 per cent reliable. Before the England tour I was a fan of hotspot, but now I am not so convinced.” The important point here is that Dhoni is referring to the version of the technology used in the Cricket World Cup 2011 and England series. He isn’t privy to the technology being used by Channel 9 in this series, which, there’s little doubt, is much more advanced than anything tried before. Ball tracking has been worked upon and the deficiencies of hotspot addressed. It picked up the faint edge of Michael Hussey’s bat in the Australian second innings in Melbourne, an edge that would have stopped the Australians 50 runs short of 240, their eventual second innings score.

The real problem isn’t India’s aversion to the DRS. The strategic issue is inconsistency in the use of technology. Dhoni is right in demanding that umpires be kept empowered. They are entitled to make mistakes. They always have, and that’s part of cricket’s lore.

Unfortunately for him and the powers that control world cricket, it isn’t possible to empower umpires in ways done in the past. The umpires out in the middle are made to look incompetent with every little mistake getting magnified on television. The fan is privy to seeing things that he didn’t in the past, and it isn’t possible to reverse these changes in the future. Rather than sacrificing the credibility of the umpire, which is what is happening in the ongoing series, it is important for cricket administrators and cricketers to understand that umpires can only be empowered by granting them recourse to technology and not by trying to stay away from it.

The other interesting issue the DRS debate has brought forth is that of Australian insularity and parochialism. When Michael Hussey was wrongly adjudged out on Boxing Day at the MCG, most if not all local newspapers tore into the Indians the following day. So did some commentators on Channel 9. Some said it was a BCCI masterstroke going into the series, while some went on to suggest it was proof of Duncan Fletcher’s hypocrisy. The argument was that Fletcher was an advocate of the DRS as coach of England, and now he has done a double turn under pressure from Dhoni to suit the interests of Indian cricketers. The Age, one of the highest-read newspapers in Melbourne, had a full page black-and-white photograph as its sports lead based on the use of hotspot which showed that Michael Hussey hadn’t hit the ball in the first innings.

Interestingly, however, most if not all papers were silent about the Haddin lbw shout turned down just hours after the Hussey dismissal. More interesting was the reaction after Australia’s second innings. While some newspapers went on to suggest that India isn’t capable of making a comeback in the series and that Pattinson is the new Dennis Lillee, not a single tabloid highlighted Michael Hussey’s luck in being judged not out thrice in his second innings effort.

This time round, the argument was things had evened out for Hussey and such things happen in cricket. Hussey added the final touches to this argument when he suggested at a press conference in Sydney that the umpires had actually done an exceptional job at the MCG.

Whether we purists like it or not, it is time to accept the DRS as an integral feature of contemporary world cricket. In Australia it has resulted in a 5-6 per cent improvement in accuracy over the last year, taking the percentage of correct decisions to almost 98 per cent. While this isn’t good enough in an ideal world, it is better than portraying umpires as inept and helps in keeping fans from talking about the ‘what could have been’.

Finally, it is bizarre to find that umpires can actually seek recourse to technology in ascertaining a front-foot no ball call, which saved Rahul Dravid in Melbourne, but aren’t permitted to do so in the case of an edge or a close lbw shout. It is this inconsistency that is the problem. Half baked use of technology is hurting the game’s credibility, and it is high time the problem is squarely addressed.

It is hard not to agree with former Australian cricketer Ian Healy when he says, “The BCCI is wrong on the DRS issue. You just need to see the technology to understand it is close to being 100 per cent reliable. The BCCI will do well to accept it sooner than later.” What Healy has left unsaid is that the matter doesn’t end with the BCCI. Maybe it is time for Cricket Australia to stop playing good boy and force the ICC’s hand at the next board meeting.

After all, it is the ICC’s pussyfooting of the issue that has resulted in this peculiar situation. If the ICC could bully India into playing T-20 cricket in 2007 despite India’s aversion to doing so, a format India has since made its own with the IPL, it is time to do the same with the DRS. The current ground reality ends up confusing the fan, who is already grappling with the dilemma of whether to watch Test cricket or the recently started Big Bash league, which is using technology to the fullest.

All said, we don’t want a situation where the outcome of a marquee series is determined by wrong umpiring calls, mistakes that are brought home to millions of TV spectators. May the better team win—and do so on the basis of good ol’ performance, not fallibility of umpiring. If bad decisions are to pick winners, then there is one confirmed loser, and that’s the sport itself.

And if that’s going to be the case, until better sense prevails, I’d rather not be a passionate cricket fan.