The Cost of a Great Victory

Most will remember this edition of the World Twenty20 as the tournament that marked the return of West Indies as a cricketing superpower. Traditionalists might lament it as the one that finally killed Test cricket in the Caribbean 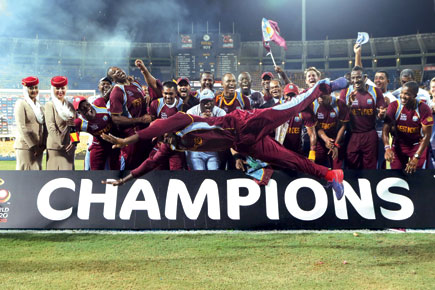 Most will remember this World Twenty20 as the tournament that marked the return of West Indies as a cricketing superpower.


There were two main contenders for the Man of the Tournament award at the World Twenty20—Chris Gayle and Shane Watson. The honour went to Watson for having scored 249 runs, picking up 11 wickets and bagging four straight Man of the Match awards. No doubt a fair nomination for a series of star performances. For the cameras, though, the winner seemed to be Chris Gayle, and by quite a distance. Even when Watson was stepping up to speak to Nasser Hussain at the presentation, the cameras would not move away from Gayle, who was busy entertaining fans with his newly mastered Gangnam dance. The presentation over, Philip Spooner, the West Indies media manager, was trying hard to get the players to pose for a team photograph in front of the Champions Board, but Gayle was still in no mood to stop his antics. He jumped over the Champions hoarding and started doing push-ups for the camera just as his friend had done a couple of months earlier at the Olympic stadium in London. In London, the cameras could not resist the pull of Usain St Leo Bolt; likewise, at the Premadasa stadium in Colombo, it was Gayle all the way. He hadn’t won the Man of the Tourna- ment, he had failed miserably in the final, but still…

I make the comparison with a purpose. Gayle and Watson, standout cricketers both, are in many ways mascots of two approaches to cricket—the West Indian way, which is instinctive and entertaining yet fragile, and the Australian way, clinical and efficient with a clear emphasis on method over genius. If the Australians are true professionals, the West Indians at their best are great amateurs. Australia might well have a more robust system and cricketing structure in place but they lack the flair the West Indians bring to cricket. And with cricket continuing to struggle with the problem of half empty grounds around the world, the sport needs the flair Gayle and party bring to it.

Was this a freak victory? Is their success owed merely to a bunch of talented unpredictable individuals coming good at the same time? Or is this a culmination of an invisible process?

In the course of researching West Indies cricket and in discussions with experts like Sir Hilary Beckles, the best known scholar of the game in the Caribbean, on the problems that beset the game here through the nineties and early 2000s, it was evident that one of the fundamental issues was lack of money in the game. Players from the recent past were often left to do clerical jobs, like acting as the liaison officer for a visiting India A team. For current players and young talent, cricket did not seem a worthwhile career choice. Even the Allen Stanford experiment in 2008, which offered West Indian stars fast and easy money (a million dollars a match) was short-lived and controversial.

Local talent had the option of making it to the NBA (National Basketball Association), which is just across the border in the United States, or going over to Dominica and try a hand at baseball. A successful season of minor league baseball would earn a player five times the money he could hope to make playing cricket for the West Indies in the late 1990s and early 2000s. Contrast this state of affairs with the Indian scene, where endorsements and big money are par for the course the moment you wear the India shirt.

It was this failure to commercialise the game that had pushed West Indies cricket into such an abysmal state around the mid 1990s, notwithstanding stars like Brian Lara. Even the Champions Trophy victory of 2004 was really an aberration. West Indies cricket just did not have the financial muscle to attract talented youngsters to the game and it was losing its way.

All this began to change in 2008, and funnily, with something that happened in faraway India—the advent of the Indian Premier League (IPL). The IPL soon created a superstar out of a certain Kieron Pollard. Not having played a single Test match for the West Indies, Pollard was a million dollar man. He was in high demand with the IPL franchises and earned money unheard of in the ailing economies of the Caribbean. Pollard wasn’t even alone. If Pollard started the Caribbean invasion of the IPL, it was Gayle who took over the competition in Seasons 4 and 5. Winning matches singlehandedly for the Bangalore franchise, Gayle was soon the toast of the IPL. Coming from Jamaica, a country plagued with serious socio-economic issues, Gayle brought hope to aspiring West Indian cricketers. On the heels of Gayle and Pollard followed Marlon Samuels, Dwayne Bravo and Sunil Narine—who won a $700,000 contract with the Kolkata Knight Riders and became Player of the IPL in Season 5. Seemingly from nowhere, West Indies had again become a force to reckon with. Even before this edition of the World Twenty20 had begun, Sri Lanka veteran Sanath Jayasuriya told this correspondent that he saw only one non-subcontinental side making the round of four—the West Indies.

It wasn’t that natural ability had suddenly deserted this cricketing super-power that produced all those legends, just that this talent had stopped gravitating to the game. The success of Pollard, Gayle, Samuels, Bravo, Narine and their mates will change that. It has also become obvious over the past few years that you needn’t play Test cricket for the West Indies to earn in the millions. On the contrary, you won’t make the millions if you only play Test cricket. For a quality T20 player today, a million- dollar income seems just a season away with the mushrooming of T20 leagues around the world.

It is important to mention here that the IPL isn’t the only cash cow the West Indians are milking. They are also playing the Big Bash in Australia, the BPL in Bangladesh, SLPL in Sri Lanka, the Zimbabwe Premier League and a host of other T20 tournaments around the world. Such leagues have nurtured a new band of million dollar professionals who have become world stars without making a mark in the Test match arena. Samuels, Pollard, Narine, Bravo, even Gayle are all underachievers in Test cricket, but they are stars in the T20 format.

This explains the very particular nature of the resurgence. While the West Indies are now a real force in T20 cricket, Test cricket in the Caribbean continues to languish. The West Indies board recently scrapped Test matches altogether from the itinerary of the Sri Lanka tour of the Caribbean in May 2013. Instead of playing Test matches, they are more intent on organising a tri-series involving India and Sri Lanka to rake in the money. Not only does T20 cricket give you more visibility, more eyeballs—and, in turn, more money—it also attracts thousands to the grounds in the Caribbean. So, while Test cricket fights for survival here, T20 cricket is rapidly gaining momentum.

What are the chances that their T20 success, newly crowned with a World Twenty20 victory will have a knock-on effect on the prospects of the West Indies in other formats? Not very high. The West Indies, it is probably time to accept, have given up on Test cricket. They want to excel at T20, and that is where it stops. Test cricket doesn’t matter here anymore. The resurgence is at best an incomplete one and will remain so in the foreseeable future. While Australia and England continue to love Test cricket—packed stadiums at Test grounds being proof—the West Indies have moved far away from the days of Clive Lloyd and Vivian Richards, when people would flock to the Sabina Park in Jamaica or the Kensington Oval in Barbados to watch five-day cricket.

The truth is world cricket today stands polarised. While Test cricket continues to be the prestige format in England and Australia, traditional power centres of the game, T20 is increasingly becoming the format of choice nearly everywhere else, certainly in the Caribbean.

And like with all things cricket at the moment, India has had a major role to play in this transformation. Sample this statistic: at the start of play on Day 1 of the Test India played against the West Indies at the Eden Gardens, Kolkata, in November 2011, there were less than a thousand people in the stands. The very same Eden Gardens had witnessed riots when the West Indies played India on 1 January 1967, was packed to capacity when Sunil Gavaskar was snapped up by Malcolm Marshall in the first ball of a Test match in 1983, and had 50,000-plus people present when Sachin Tendulkar scored a match-saving century in 2002. Now, they flock to watch Gayle turn out for the Royal Challengers from Banga- lore, Pollard, when he leads the charge for the Mumbai Indians, and adore Sunil Narine for finally winning the IPL for the Kolkata Knight Riders.

This victory, then, does not come as a surprise. The West Indies, brimming with T20 talent, were among the favourites. Yes, even away from home. They have the best T20 batting line-up in the world today—Gayle, Samuels, Pollard, Bravo, Sammy and some very capable lower-order hitters comprise a batting line-up which, even on a bad day, will get to 150. That’s what happened in the final at the Premadasa. Struggling at 44 for 2 after 11 overs, West Indies managed to score close to a hundred runs in the last 9 overs to reach a competitive 137. In bowling, they have the express pace of Edwards, the swing of Rampaul, the guile of Bravo and the spin of Narine and Badree. Sammy and Pollard are more than fill-in bowlers. And unlike the West Indies teams of the past (great individuals excepted), they have a world class fielding side as well—Pollard, Russell and Bravo being the stars in that department. It is the kind of rounded T20 side you’d expect to win.

The picture is radically different in the Test match arena. They were thrashed by the Indians at home in November 2011, thrashed in England earlier this year and are currently languishing in the lower half of the ICC (International Cricket Council) rankings. The World Twenty20 win, then, might end up being a mixed blessing for the West Indies—it will surely elevate the status of T20 cricket in the Caribbean islands, but it will almost as certainly sound the death knell for West Indian Test cricket. To quote Chris Gayle again, “T20 is the format I love best. It allows me to dominate and entertain crowds across the world.” The message is also in the words left unsaid.