The booming market economy sustained by the World Cup 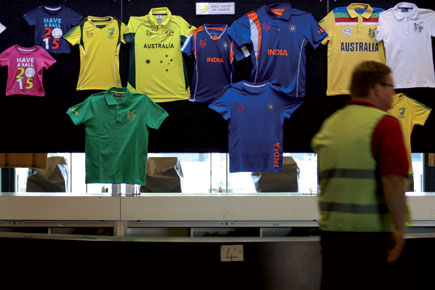 An avid cricket watcher, Mumbai-based Anant Roongta had, over the years, noticed one of the motifs of the Indian Premier League, the tournament that added the ‘-tain(t)ment’ quotient to cricket. “You can see him in every match of the Chennai Super Kings team. He is the one who paints himself head to toe in yellow,” said the 28-year-old director of Fanatic Sports, one of the four official travel agents from India for the upcoming Cricket World Cup. It was the first week of February and I was sitting in his spacious cabin at Famous Studio in Mahalaxmi, Mumbai, a sleek wooden table with all kinds of Apple bling between us.

“About a week ago, the man approached us.” He did not have any money to watch the tournament, the CSK fan declared, but he still wished to go. He wanted Roongta to sponsor him; in return, he would offer his body as a canvas for Fanatic Sports for all branding exercises. The fan, who had perhaps seen hope in the agency and its namesake, returned disappointed for want of tickets. But by Roongta’s assessment, he was still an early bird.

Ever since the counters opened in March 2014, the week leading up to 14 February—the day the tournament is scheduled to start—has been his busiest ever. But it is not just for the responsibility of ferrying clients back and forth, but also fending off new inquiries.

“Since March last year, we have had packages ranging from Rs 6,500 to Rs 3 lakh. But traditionally, we Indians wake up two days in advance. When people still come to us, we tell them that now just the flight prices have shot up to around Rs 1.5 lakh a seat.” On such occasions, sour grapes kick in. “Some of them go, ‘Chhodo (leave it), India is playing shit anyway’.”

Of the 300 tickets sold by Roongta’s company, nearly half the sales were made in 2015. Roonga is buoyed by the response he has been getting, although he understands that it is much more subdued compared to the 2011 Cup that was held in India, primarily due to the expense involved in a trip Down Under. It’s little wonder then that of the million-plus tickets up for grabs, total sales hovered around 750,000 with nine days to go. The Australian High Commission in India recently announced an increase of tourist visa applications by 3,268 in January as compared to the same month last year. Ergo, for those not looking to invest in the experience, Roongta recommends technological innovations, like a 4K TV.

It seems that the same insight has struck the television broadcasters packaging the World Cup coverage this time round. With 14 teams participating in 49 matches that are going to be played in the coming weeks, Star Sports, the global media rights partner, has pulled out all stops in ensuring overwhelming and saturated feeds straight to living rooms. As many as 14 Star-affiliates will be airing the World Cup, six of them in regional Indian languages. The feeds will come in from at least 29 sports cameras including Spidercams and a few mounted on hovering drones and players’ sunglasses.

The channel’s star-studded panel of experts comprises 59 former cricket captains and World Cup have-beens. Even as most of them wax eloquent in English, regional channels also have a trump card with commentary by cricketers speaking the tongue. For example, Sadagopan Ramesh, an all-rounder who went out of circulation around the turn of the century, will be seen and heard dissecting the nuances of cover drives in Tamil.

The World Cup preparations have also spelt gold for number-junkies. The Star network’s programming heads have put together a team to trawl through 4,000 hours of cricket footage and make notes of the tiniest details. As a source close to the developments says, “Like, 30 per cent of the time, a batsman hits a bouncer for a four, or every 36th ball a certain bowler balls is a doosra.”

Neck-and-neck in upping the number-game are Indian advertisers, who are expected to pump in between Rs 1,200 and Rs 1,500 crore into the tournament, going by media reports. This, however, is a conservative estimate arrived at by a few experts, one of whom points out, “Nobody really knows the numbers, but everyone wants to talk about them.” While Star Sports declines to comment on its World Cup advertisement air-time rates, one could get a rough idea from those at the latest edition of the IPL, which ranged between Rs 4.5 and Rs 5 lakh for a 10-second spot.

Ad guru Prahlad Kakkar differs with those who see this gala event as a prudent investment. “Seventy per cent of the revenue of the World Cup comes from India. Our ad campaigns are devised on the assumption that we will reach the semifinals. If we get knocked out, there is huge gloom as everybody is fucked. Let’s face it, we are not a cricket crazy nation, we are an India team crazy nation,” he tells Open. It is perhaps why for every chest-thumping ‘Won’t Give It Back’ campaign, there is a relatively safe ‘Yeh Game Hi Hai… Taste Ka’ out there.

It is, of course, a mega-event; the International Cricket Council, which organises the tournament, has not revealed its budget; the 2011 World Cup budget was said to be Rs 500 crore, which sounds like an underestimate. A former ICC official, who does not wish to be named due to contractual reasons, tells me that getting the funds in is the last thing on the international cricketing body’s mind. Clearly, there is enough money to go round. “Take the case of this World Cup. Back in 2007, the telecast rights were sold to ESPN Star Sports for $1.1 billion to last till the end of this World Cup. Each of the tournaments subsequently held generates its own set of revenues,” he says. “For the ICC, it’s only about getting full houses.” So long as advertisers are convinced that the World Cup will have millions of eyeballs in their target markets—India being on top of the list—the ICC rolls in the cash.

Around ten years ago, the rights to stage the World Cup were jointly awarded to Australia and New Zealand. “In 2011, a separate body called Cricket World Cup Inc was set up to organise the World Cup by the two member nations. It was responsible for management and coordination with all bodies like the ICC, state associations and stadium officials,” he says.

These officials, along with 4,000 volunteers working across departments will be unravelling the World Cup, which expects to attract a live viewership of around a billion people in 200 territories worldwide.

One of the main goals of the hosts was to ensure that the World Cup makes a mark on social media. “Since 2011, the core team introduced #CWC2015 to create a buzz on Twitter. Targeted campaigns were run on Vine, Instagram and Facebook, and new mobile apps were introduced, like the official World Cup and the Rankings app,” says the former official. Their recognition of the potential of cricket on the internet was recently redeemed when an eliminator match in the 2014 edition of the IPL became the most watched tournament online, with 2.8 million viewers, second only to the US Superbowl that got 5.5 million viewers in 2014.

There are more ways of monetising cricket fever. For each member country of the ICC, rights are sold to a manufacturer that is authorised to sell official World Cup merchandise. In India, a Bangalore-based company sells everything from slippers to hoodies. Then there is some memorabilia, like replicas of the coin used for the toss, scorecards, and used cricket balls that are auctioned at the ICC Store. In February, Disney Inc jumped in to claim its share in the pie by co-launching the ICC’s official game for computers and mobile phones.

It isn’t just the cricketing body and advertisers that are bracing themselves to capitalise on this moolah-maker of a sport. In India, an illegitimate industry—estimated to have Rs 10,000 crore riding on it—will get cracking. Cricket betting, which escalated during 2013’s IPL with players suspended for being involved in spot-fixing, will likely kick off big-time on 14 February. According to the UK-based website Betfair.com, Australia are the favourites this year, with India in fourth place.

For a man who has probed one of the most high-profile betting and match-fixing cases in recent history, Nandkumar Gopale seems surprisingly unenthusiastic about some of the laws he must enforce. A senior inspector of the Property Cell of Mumbai police, Gopale led the investigation of the notorious IPL-6 betting case, one whose trail went from local bookies to the highest echelons of the BCCI, India’s own cricket authority. A few days after he signed a report that effectively gave a clean chit to former BCCI President N Srinivasan, he candidly bemoaned the impracticality of India’s anti-betting laws.

“You are not going to curb it; you might as well earn revenue out of it,” he tells Open.

To illustrate the all-pervasive nature of India’s betting culture, he cites the example of satta gulli (loosely translated to ‘gambling street’) in Bikaner district of Rajasthan. As the legend goes, outlets along this lane accept bets on everything from the weather of the day to the price of cotton at some point in time. “We see the inflow coming mostly from business communities hailing from Gujarat and Rajasthan. Along with parts of these two states, Delhi has emerged as a major hub for bookies, followed by metros like Mumbai and Ahmedabad,” says Gopale.

It is difficult to make even a half-way accurate estimate of the numbers involved in cricket betting in India, but anecdotal evidence suggests that it is very widespread. “Another challenging aspect that has emerged in the last few years is the replacement of the conventional betting and matka dens,” says Gopale, “Nearly 80 per cent of the betting traffic has shifted online. Bets are now being placed over mobile phones.” Nabbing bookies and other culprits has become that much more difficult as a result.

With some websites locating their servers outside India, thus protecting them from violating the country’s laws, those who register with a bank account in another country can also place bets from their bedrooms in India. Existing laws, in any case, are not a sufficient deterrent. With a dangling carrot worth crores of rupees, bookies are willing risk a raid on their premises.

“But those who bet are not real cricket fans. When there is money at stake, it comes at the cost of passion for the game,” says Gopale. It is the ordinary cricket fan who will support his team unconditionally—often to the point of irrationality. And money is often made off it.