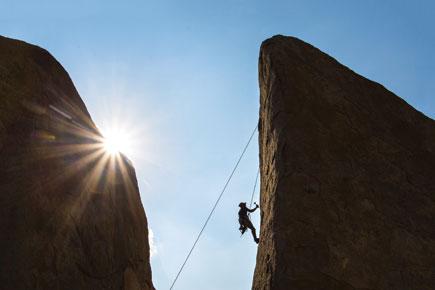 Badami’s rock formations are a conversation between the ancient and the modern. Some among them, great sandstone prows of a ship sailing through time, shimmer like poetry, their soaring overhangs and crags the stuff of climbers’ dreams. Rising sharply behind the noisy town with its diminutive houses is one such grand, weather-scoured swatch of reddish black. Praveen CM, a 30-year-old Bangalore-based sport climber, has prowled the area for a month now, smitten by these rocks stretched out against the sky like a Renaissance Venus. He knows how the sun paints her in its palette, creeping up her legs and finally engulfing her in golden light at about 2 pm. “I call it Paradise,” he says—for the parakeets that rise in straight lines to their perch at the top. The prehistoric rock art here—man and animal crudely sketched in red—suggests it may always have been paradisal. If you forget the goats bleating somewhere below for a moment, you can imagine yourself a fly on the canyon walls of the American west that trapped climber Aron Ralston, played by a boyish James Franco in Danny Boyle’s 127 Hours. What Praveen is attempting is a lot less scary, but an ordeal nevertheless.

A white-bellied falcon—‘the villain of Paradise’—watches mid-flight as Praveen springs on tiptoe, like a raindrop from a puddle, his short, whittled body snug against the rock. On a 20-metre-high vertical slab, where the rest of us flounder ignominiously like colts on a tether, Praveen is all poise, suspended in arabesque by the fingers of one chalk-dusted hand. The rope at his waist is simply a technicality. He is mapping the nearly invisible holds on the rock before leaping up and away with fast, skittering moves. Finally, he hauls himself up the summit with one impossible swing of his limbs.

Climbing is ballet, all en pointe moves and stretches. But the delicacy is entirely imaginary. Climbers are heroes, testing, in their painfully tight shoes, the limits of physical and mental fortitude. Their tutus are belts with dangling carabiner clips and harnesses. And unlike dancers, they embrace obscurity, scaling dangerous heights rarely for wealth or glory but for a brush with the incandescent beauty of accomplishment. Consider this. Sport climbing competitions are held on relatively safe indoor artificial walls, yet many climbers get their high from weekend cragging. Outdoor climbing, they argue, equips you to deal with various probable scenarios and makes you competition-ready. However, it is the artificial wall climbs that feel like practice sessions. Good climbers inevitably form a nurturing connection with rock. For many, competitions are a way of snagging sponsorships to travel farther and scale mightier boulders.

Sport climbers typically ascend routes with pre-placed bolts and hangers on a rock face. With a rope tied to their harness, the loose end of which is handled by a ‘belay’ partner, they clip quickdraws— two carabiners attached by a rigid strap— onto each successive bolt along the route. Thus protected in the event of a fall, they reach the top of the route, where there is usually a double-bolt that is used to abseil down the rock. This method, called ‘lead climbing’, is popular for the challenge it poses as compared to top-rope climbing, which involves hanging by a rope rigged from above.

In India, where climbing is less than 20 years old, few elite climbers bolt new routes for others to climb. “Bolting a line is a big responsibility,” Praveen says. “If you don’t bolt safely enough—say, there is too much distance between two bolts, or a bolt comes loose because you did not test it or because the rock was flaky—you will never be able to forgive yourself,” he adds. Those who open new routes to other climbers have the right to name them, but besides that, bolting is largely thankless work. “An expansion bolt and hanger —made of high-grade steel and imported— cost about Rs 400. Add to that the cost of a good drill machine, tools, batteries, the overhead of travel and other expenses, and one bolt easily breaches the Rs 1,000 mark,” says Keerthi Pais, who runs Equilibrium Climbing Station, a climbing gym in Bengaluru, with his wife. Every day, from 5 to 10 am, he coaches climbers for competitions like the Asian Youth Championship, where India has been bagging medals of late. No Indian, however, has won a world championship medal in the adult category. “Thanks to climbers like Praveen who showed the way for future victories, we now know how to coach aspirants for the youth championships. But the sport is fiercely competitive at the adult level. It could be a few years before we win a medal,” says Pais, who started climbing in 1991, when adventure was not yet an industry.

Few Indian climbers straddle the fraternal worlds of competition climbing, rock bolting, bouldering and mountaineering. Praveen, who has been a professional climber for half his life, took a break from competitive climbing to summit Mount Zambala, a 5,850-metre peak in Siachen Glacier, on behalf of the Indian Army in 2012—and he remains the only man to do so. “With every bolt I drilled into the surface, I wondered if I would survive long enough to come back to it. My fingers were freezing, the snow was beating hard on my face, visibility was less than 10 feet and I was tired. I didn’t know if I would make it back. I told my climbing partner, Arun Baby, not to budge if I took a fall. It wasn’t worth the risk. As I climbed another five feet, I was covered in mist. Now, I was truly alone and there were still six pitches left,” he recalls.

The sense of triumph, however, quickly faded, memories of desperation for air replaced by desperation for real meaning in life. Was it really imprudent for a competition climber in his prime to summit mountains, he wondered. Was climbing just a sport or a way of life? After all, scaling coconut trees had been his first love as a child. Dissipated by the Zambala climb, Praveen still won the Nationals that year but could not manage to compete internationally. A setback on the personal front made him miss a few more toe-holds and he slid down a little, before dashing up, literally, to the top of the world. For the only way out of an abyss was to keep climbing up, and there was no higher ground than the Everest. The climb proved quite boring, though, more like a hike, with the added challenge of acclimatisation. But then, a fateful earthquake and avalanche struck, killing over two dozen people on the mountain. Praveen had a narrow escape and an epiphany, as he saved lives at Camp 2: he knew his life as a climber and an adventurer was far from over.

The next adventure would be closer home, in Badami, a dusty oilseed-growing town in north Karnataka famed for cave temples dating back to the 6th-8th centuries CE. It was already a rite of passage for most serious climbers. Praveen had first climbed here as a teenager and now he found himself mulling over new routes, mentoring young underprivileged boys and scouting for land to set up a farm-cum-climbing station. He has since opened a dozen or more routes in Badami and in Chitradurga—virgin climbing terrain 200 km from Bengaluru where he bolted challenging lines on giant granite boulders last month. The climbing station in Badami, when it materialises, will allow easier access to what are, without a doubt, some of the country’s most gorgeous rocks.

Access, however, isn’t the only issue impairing the Indian climbing scene, says Dinesh KS, a hobby climber and the director of Wildcraft, an outdoor products company. When he helped set up Bangalore’s first artificial wall in the 1990s, Dinesh hoped it would encourage people to train for the outdoors. “If you think about it, it should be a natural progression from indoor and competitive climbing to outdoor climbing and then to alpine climbing. Unfortunately, this has not happened. People who were first introduced to climbing in a secure indoor environment continue to prefer artificial walls,” says Dinesh, who was among the first Indians to bolt routes in the early 1990s.

Bolting is an art, says Dinesh, and it consumes time, energy and money. In the late 1980s, when Dinesh and his climber friends started bolting in Ramanagara, they had very basic gear. Technical equipment was hard to get a hold of and they had limited exposure to climbing as it was done outside India. “Even then, we knew that a bolt is a lifesaving piece of equipment, a piece of metal that can decide the fate of a climber,” he says. Dinesh continues to open routes in Ramanagara, one of the world’s oldest granite hills, but it is an old classic called Darkness at Dawn that is close to his heart. “You have to be really passionate to put up a line. It is your own expression on a rockface,” he says.

Back in Badami, at first light, I follow Praveen and his posse of local boys— they all wear local slippers made of old tyres that are apparently impervious to thorns—into a C-shaped formation where he intends to bolt today. “It is a relatively easy but elegant route, following a straight line, with plenty of challenge for a beginner. I would rate it 5b+,” he says. For perspective, the hardest route in the country, Ganesha, also located in Badami, is graded 8b+. Bolted by former world champion Alex Chabot, it is on Praveen’s list of things to do this year. “My other big ambition is to bolt a really tough route—tougher than Ganesha—in the Paradise area,” he says. “It is not just because of the difficulty, but because the overhang is so lovely, it’s waiting to be bolted.” Praveen will need considerable practice along with a reliable belaying partner before he is ready to answer the call of the stone. And he will need money, which he doesn’t remember making in a long time, he says, only half-joking.

A taped-up Bosch drill borrowed from Keerthi Pais slung on his shoulder, Praveen hammers at a spot 10 metres high before drilling a three-inch hole. When he clears the dust, it drifts down like snow and piles up on cracks along the rock face. Hanging by a figure- of-eight knot, the climber then inserts an expansion bolt into the hole and tightens it with a spanner, his legs swinging. He tests the strength of the bolt, jerking violently at the hanger, his body lengthening with each pull. After repeating the drilling exercise six times over, Praveen is sweating from what has turned out to be a cross training session. The sprigs of his hair are silhouetted against the bright morning sky. There are people who want to climb, and there are people who have to climb. Whoever ends up using his routes, Praveen would have found a way to be himself in his art.