No cricketer among them yet, but Manipuris are doing Indian sport proud. And it’s not just that winning medals is their ticket to secure jobs 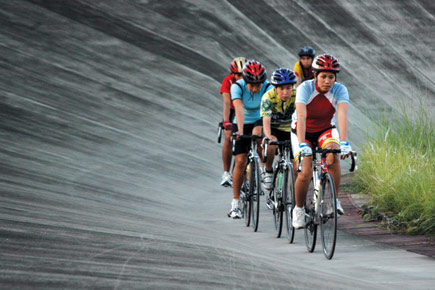 No cricketer among them yet, but Manipuris are doing Indian sport proud. And it’s not just that winning medals is their ticket to secure jobs


Touchdown at Tulihal airport in Manipur’s capital Imphal is no ordinary landing. At least one former Olympian would facilitate the arrival and, chances are, you could bump into two more who were part of the Indian hockey contingent to the 1984 Olympics. And that wouldn’t be a one-off encounter with sporting champions. Government offices, police and paramilitary forces and private establishments in this militancy-wracked state teem with countless Olympics, Commonwealth, Asian and National Games medalists. Thousands more train tirelessly to join their ranks.

Hundreds of playgrounds across the state are busy venues to swarms of young boys and girls practising various sports with rare, single-minded dedication. The expansive Khuman Lampak sports complex in Imphal offers facilities for every sport ranging from football, hockey, martial arts, fencing and cycling. Training is imparted for at least 35 sports disciplines here, and is the one spot most of the youngsters in and around Imphal hit at least once a day. No wonder, then, that Manipur’s haul at successive National Games and various other tournaments has often been the richest among all states. In fact, you’re not really considered a sportsperson of much import here if you don’t have at least one national-level medal under your belt.

Winning medals has become, for Manipuris, the stepping-stone to secure jobs in the Army, paramilitary forces, central PSUs and even the corporate sector. While precise figures are not available, Manipur’s Sports Minister N Biren Singh says that more than 10,000 men and women from the state are serving in various organisations outside the state; and all got their jobs on the strength of their sporting achievements. This in a state where the population in the 20-40 age group is about one million. And just consider this: at least 500 footballers from Manipur play in various teams across the country.

To attribute this passion for sports to a quest for a job alone would be to trivialise the issue. Manipur has a rich tradition of sporting activities under royal patronage. “From time immemorial, sports have been an integral part of our society and culture. Many traditional sports are believed to have been bequeathed to our ancestors by the gods. The Maharajas of Manipur used to generously promote and sponsor sportspersons and tournaments. Our rulers used to provide jobs to good sportspersons,” says L Tiken Singh, director of Sports Authority of India’s North East Regional Centre (NERC) at Imphal.

L Ajit Singh, principal of the National Sports Academy (NSA) at Imphal, attributes Manipuris’ flair for sports to historical reasons. “Manipur had hostile neighbours who used to attack the kingdom. Warfare was thus a way of life and, hence, physical fitness was a necessary attribute. During the Maharajas’ times, all young men had to serve for three years in the army and were taught thang-ta (Manipuri martial arts with swords and knives) and sarit-sara (unarmed combat),” he says.

So integral is sports to life in Manipur that many religious festivals are incomplete without them. Tournaments featuring traditional Manipuri sports like polo, mukna (wrestling), mukna kangjei (a unique mix of wrestling and hockey), yubi lakpi (a bit like rugby) and kang (akin to dice, but played with beans) are an inalienable part of the state’s biggest festival—Yaosang, or Holi. Boat races complete the festival of Heikru Hidongba.

Thang-ta and sarit-sara are a vital component of Lai-haraoba, a religious festival involving the worship of different presiding deities of every locality, hamlet and village in the state, while kang, played during the annual rath yatra, also lends its name to this festival. “This is really unique to Manipur. So many traditional games that form an important part of religious and social occasions,” says P Nilakomol Singh, the state’s first Olympian who was in the Indian hockey team at the 1984 Los Angeles Olympics.

Started last year, the NSA admits 60 boys and girls (under 12 years of age) per batch. The students are trained in archery, boxing, taekwondo, judo and wrestling every morning and afternoon and attend classes in between. “This is a residential facility and there’s already a huge rush of applicants,” says Ajit.

The NERC has a tough time selecting from the tens of thousands of applicants for its training camps in various disciplines. “We’re flooded with applications for our two training centres offering specialised coaching in more than 20 disciplines, including thang-ta, sepak takraw, mukna and wushu. We take in young men and women who’ve excelled in a particular sport and give them intensive coaching. They also attend classes at the higher secondary and under-graduation levels. Everything is free and they get stipends varying from Rs 40,000 to 60,000 a year. Of the nearly 500 students we have with us here, around 50 are international-level sportspersons,” says L Tiken Singh, director, NERC, adding that the rest are all national-level sportspersons.

But it’s not just the NERC that’s churning out great players. “There are many private sports centres and academies, run by groups of people or communities, that are doing very well,” says Ajit A case in point: the Mayalambi Sports Academy about 25 km from Imphal. “This is a unique community-sponsored facility that offers residential training in judo. It has produced two Arjuna awardees and many national champions. Tombi Devi, one of the two Indian judokas at the Beijing Olympics, is from this academy,” he adds.The tradition of organising tournaments is very much alive. The state’s calendar is packed with regional and national-level sporting events. “Before Manipur’s merger with India in 1949, a multi-discipline tournament featuring all our traditional sports, including polo and water polo, between teams put up by all the four Panas (administrative units) in the kingdom was an annual event that drew thousands of people from all over Manipur. The Maharaja was the chief patron and used to hand out cash and other prizes to the winners. That tradition has continued and even small hamlets in the remotest areas organise sports meets where players from other districts are invited,” says Th Brojen Singh, a senior officer of the state sports department.

For the record; the Manipur Olympic Association was formed way back in 1947. The Sir Churachand Memorial Invitation Football Tournament, being organised for more than 50 years now, has witnessed participation of many international teams and players. Major sports events, like this tournament, are public holidays. “While this is perhaps the only state where a holiday is granted to allow people to witness a tournament, the important part is that people actually go to the stadium to watch and cheer their favourite teams,” says Neeraj Prasad, a scientist with Indian Council of Agricultural Research who has worked in various parts of the country.

Like Prasad, non-Manipuris who have worked in Manipur are amazed by Manipuris’ zeal for sports. “It’s fascinating to see and feel the ardour for sports here. Parents lay as much stress on sports as on academics for their kids. I know of very poor parents who forgo their meals to buy eggs and milk for their children, or save and scrounge to send their children to coaching camps,” says an officer who commands a battalion of the Assam Rifles.

A notable feature in sports administration here is that politicians aren’t involved in it. Incidentally, it is a well-acknowledged fact that the sports department is the only one that functions properly in the state government paralysed by decades of insurgency.

The most striking proof of Manipuris’ love for sports is visible at the Kangla Fort in the heart of the state capital. This erstwhile seat of the kings hums with activity for a few hours every morning. Cyclists and joggers vie for space with martial arts practitioners, gymnasts and others. In the moat that rings the fort, canoeing and kayaking enthusiasts wait patiently for swimmers to finish their morning practice. A little distance away, the break of dawn finds hundreds of young men and women filing into the Khuman Lampak sports complex with dreams that they’re determined to realise.

After all, for most of them, that’s the only escape hatch from despair and violence.