There are football fans. And there are Bengal’s football fans. If you still need to know which of the two stretches the word ‘passion’ into extra time, you need an education. 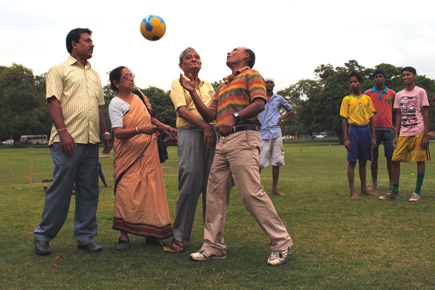 
Hadn’t it been for football, they’d have perhaps never even dreamt of stepping out of India. But such is their craze for the sport, the Fifa World Cup to be specific, that they scrimp and save for four years to fly to distant shores and watch soccer’s mega event. About a hundred soccer enthusiasts from India go to watch the World Cup. The largest group is from Kolkata, and most are of modest means. Some run up huge debts, many take loans, and almost everyone has a ‘World Cup fund’ that they put a portion of their earnings in, because they just live to go to the next World Cup.

Pankaj Ghosh coaches the state junior football team and earns just a few thousand rupees a month. The 58-year-old has gone to the last four Cups and is flying to South Africa later this month. He puts aside more than half his monthly earnings in his ‘Cup fund’. But even that isn’t enough. “I’ve already taken a loan of Rs 73,000 from a bank and have applied for another loan. I can’t live without going to the World Cup,” he says.

Ghosh ascribes it all to his “mental strength and courage”. He went to the Beijing Olympics after taking a loan of

Rs 1.8 lakh that he has just finished repaying. His trip to South Africa—he’ll watch seven matches, including the semi-finals and the final—will cost him nearly Rs 3.2 lakh. Apart from his ‘Cup fund’, Ghosh has no savings: “The only future I think of is the next World Cup.”

Pradip Kumar Dey, 47, a petty businessman, makes a few thousand a month from the small businesses he runs with friends and associates. “But I have always saved as much as I can,” he says. “Before the last Cup, a football administrator of Kolkata I knew asked me if I would like to go watch the matches in Germany. He told me it’d cost me about Rs 2 lakh. I rushed home, took out my bank passbook, and saw I could manage it. I had never even dreamt that I would travel by air!” On landing in Germany, though, he discovered he had been cheated by the agency that was to get match tickets. “I returned without watching a single match.” But that acute dismay could not keep him from planning for South Africa this time. He got in touch with Leisure Sports Management, the company that has been taking Kolkatans to international sporting events for decades now. Over the past four years, he has saved Rs 100 everyday for the Cup. He’s also taken a loan. “I’ll work even harder when I return to pay off this loan and start saving for the 2014 World Cup.”

Of all the World Cup travellers in Kolkata, the most well known perhaps is Pannalal Chatterjee, 77, and his wife Chaitali, 67. The couple has been going to all the World Cups since Spain in 1982. “I played football for many clubs. My wife has also been a football fan since childhood. My soccer guru told me in 1980 that if I really wanted to see good football, I should go to the World Cup. Ever since then, my wife and I have been going to all World Cups,” says Pannalal. “We live on my pension and save the rent we receive from our tenants for the Cup,” says Chaitali.

They save whichever way they can, says Pannalal: “I’m a founder member of the Sikkim Football Association and get air fare to go to Gangtok a few times a year. I go by sleeper class in train and save the money for the Cup.” This time, the couple will watch five matches. Rajat Saha, a decorator, tells Open that being a businessman, he can hardly save. “I do try to save for funding my World Cup journeys, but I use it all up for my business. And every time, there’s a last minute scramble for funds before the World Cup. I’m taking a loan this time too,” says the 43-year-old, who has been going since 1994. Prasenjit Banerjee, a paediatrician, has a separate bank account into which he puts money every week. “I was born into a very poor family and I could never dream that one day, I’d be watching World Cup.”

They cut a lot of corners too. “We always put up at guest houses with kitchen facilities where we cook. We go in a group to save costs,” says Banerjee. Many take dry food like puffed and flattened rice, biscuits, tea bags and other foodstuff. “We usually gorge on breakfast, which is complimentary, and make do with inexpensive snacks or the foodstuff we take from home,” says Kansari Kayal, a small-time businessman who’s looking forward to his fourth World Cup. “I mostly have just a meal a day. I don’t need to eat, football fills my appetite,” says Pankaj Ghosh.

But even all the savings and cutting corners would not have taken these enthusiasts to the World Cups had it not been for the Kolkata-based Leisure Sports Management. This travel house takes groups from all parts of India to international sporting events. “But it’s only in Kolkata that we find such enthusiasts. People who don’t have the means of travelling even outside Bengal approach us. We have to help them in whatever way we can,” says Leisure Sports Management’s executive director Soumen Sinha Roy.

And, of course, the entire Kolkata contingent are die-hard fans of Brazil.