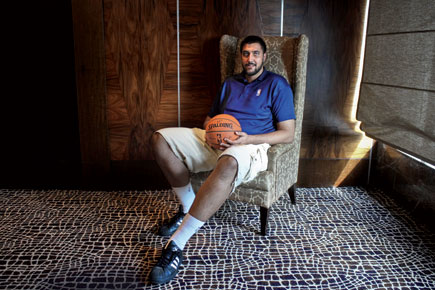 At a press conference for a Bollywood film on a recent evening in a suburban Mumbai hotel, one featuring actors Priyanka Chopra and Ranveer Singh, a whisper starts doing the rounds. Some say a giant has entered the hotel. Others claim they have glimpsed a bear. One by one, journalists disappear from the room. And before long, the conference has been temporarily suspended— with the two actors marching, followed by a posse of journalists, to the other end of the passage where they have heard the giant lurks.

I make my way through this passageway, pushing aside awestruck hotel staff and elbowing bewildered journalists, to stand at the threshold of a half-opened door. I try to peer through this opening, but the subject is bang in front of me. And all I can see at this range are two enormous shiny black sneakers, which I learn are size 22, and two giant legs atop it. To identify the owner of these two legs, I have to enhance my field of vision. So I take three steps behind, arch my neck backwards and raise my head in reverent anticipation. And somewhere up there among the lights in the ceiling is the smiling face of Sim Bhullar.

Gursimran Bhullar, or Sim Bhullar as he is known, became the first individual of Indian descent to play at an National Basketball Association (NBA) game last month. Bhullar is a colossus even in a game that attracts some of the planet’s tallest people. At seven foot five inches, he is currently the tallest player at the NBA and the sixth tallest ever in its history. Listed at 360 pounds (around 163 kg), he is also NBA’s heaviest ever basketballer.

Just minutes before, I learn that Priyanka Chopra had to climb a chair, while Ranveer Singh climbed Bhullar himself to fit into a picture frame. The public relations professional setting up my interview with Bhullar pats my back along with that of another journalist, and says, “To interview him, the two of you are going to have to climb each other.” Thankfully, it doesn’t come to that. A throne-like chair with a huge backrest is found and Bhullar is seated.

“How’s the view from up there?” I ask, and my hand, offered for a handshake, disappears into his. His mouth widens, a large hole appears and a yawn is let out, filling the room, I suspect, with at least double the carbon dioxide than what existed earlier. Perhaps the yawn is because it’s a question he has heard several times. But he replies nonetheless. Holding a one-litre mineral water bottle between the thumb and index finger of his right hand and emptying it in three large gulps, he assures me it’s not all that bad.

Talking to the 22-year-old Bhullar is a bit like talking to someone living on the first floor. You have to constantly throw your voice and often point your ear towards him to hear him better. For a man of his size, he has an incredibly soft voice. Grinning through his slightly uneven teeth and scraggly beard, he tells me how every time he visited India with his parents, he would get random requests for snaps taken with him. Now on his first visit as an adult and without his parents for company, he says these requests have increased. “I don’t think they know I play basketball,” he says. “They just want to take pictures with me because I am tall.”

Bhullar was born in Ontario to a hardworking Punjabi immigrant family that had moved to Canada in 1987. His father, Avtar, 6-foot-5-inches tall, drove a taxi, while his mother, Varinder, also quite tall at 5-foot-10-inches, worked as a seamstress. About eight years ago, Avtar gave up his job as a cab driver and instead began running a gas station and an automobile parts shop in Toronto. The couple first had a daughter, Avneet, who is around 5-foot-8-inches tall and now works as a lawyer. But it was really the two sons that followed, Sim and his younger brother Tanveer, who showed no signs of letting up as their bodies grew.

Every time the family moved into a new house, their mother would have the doors of the house demolished and raised to ease their passage. “My parents finally bought a house with doors around eight foot in height a few years ago,” Bhullar says. “So we don’t have that issue any more, man.”

Although his father played kabbadi and apparently almost made it to the state level, no one in the family had ever played basketball until Bhullar started playing the game as a 13-year-old in school. He was 6-foot-3-inches by the sixth grade, and 6-foot-8-inches a couple of years on. “I loved the game. I was much taller than anyone else around. I couldn’t but become more serious about it,” he says. His brother Tanveer, 19 years of age and around 7-foot-3-inches tall, also followed him, and currently plays college basketball for New Mexico state.

When Bhullar first appeared on the NBA radar, he was an intimidating presence, but he was also horribly unfit. He was out of shape, low on stamina, and terribly sluggish on court. He even had a belly that protruded from beneath his jersey. Agile players could easily manoeuvre themselves around him. He was signed on by the NBA team Sacramento Kings in August last year but subject to a waiver just a month later.

But instead of letting him go completely, they decided to experiment with him a little. They sent him to their farm team, the Reno Bighorns, which plays in the Development League. This team is known to play a particularly fast-paced game. Bhullar, one would think, would be a complete miscast. “It was crazy. All these guys [on my team] were just so fast,” Bhullar says, recalling that season. “But I tried. I worked hard on my fitness. I followed a strict diet. I worked in the gym. I ran on court like I had never done before. I became quicker and soon my overall game was improving. It was all beginning to work.” Opponents could no longer just bounce and dribble around him. Bhullar was using his giant frame and enormous hands to block and alter shots. He forced opponents charging for the basketball hoop to break their tempo and look for people to pass to or attempt awkward-looking shots over him. They were all made to look like hobbits scurrying around a giant troll.

In the 39 games he played for Reno Bighorns, Bhullar averaged 3.9 blocked shots per game, the third best in the D-League that season, apart from averaging a respectable 10.3 points and 8.8 rebounds per game. The numbers were good enough for Sacramento Kings. And he was signed on with a ten-day contract.

Bhullar finally made his NBA debut, against the Minnesota Timberwolves, on 7 April. “There had been so much talk about [my debut] that although I was a bit nervous initially, the occasion never really dawned upon me.” That happened later, when he returned from his gym workout the next morning, his fully- charged iPhone drained—done by some 20,000 Twitter mentions of his game.

But for all his hard work, he has had an incredible PR machinery at work. He was brought in to play for the last 16 seconds of the game, when it was pretty certain that Kings was unlikely to lose. He got to touch the ball just once during this period, and never got to attempt a single shot. In his next game, which the Kings lost 91-103 to Utah Jazz, he played for all of 82 seconds, although he did score his first points. He played another game, against Oklahoma City, for about one minute. He still remains more famous for his size than talent.

The NBA has been trying to make inroads in India, where it televises several games each week and has been organising junior tournaments and sponsoring health and fitness training programmes. The Association wants it to gain popularity like it has in China, where the game took off and developed rapidly after the emergence of the Shanghai- born NBA player Yao Ming. The owner of Sacramento Kings, Vivek Ranadive, a software tycoon who purchased the team two years ago, told me on a visit to Mumbai late last year that he is looking at Indians especially to popularise his team and the game. And for this, he admitted, the emergence of a Yao Ming-like figure is crucial.

Asked about this, Bhullar says, “Yao did a great a job being an ambassador and being the guy to look up to in China. I’m hoping I can do something like that and inspire people in India to take up the game.”

Bhullar’s future as an NBA basketballer, though, is far from settled. His 10- day contract is over. Perhaps the Kings will sign him up for another one. Or perhaps he will return to the Reno Bighorns. “I don’t know what’s up next,” he says. “I’ll just go back and focus on my game, you know, shoot some hoops and all.”