What the social media activities of cricketers say about them 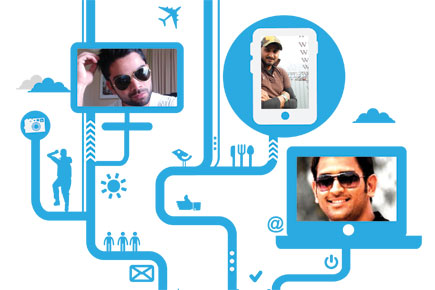 What the social media activities of cricketers say about them


The bird in Twitter’s logo is proud-chested with its beak in the air. It is the kind of bird that might eat only gourmet worms. Its vanity is understandable. In just a few years, for better or worse, the site, where words are scrunched to fit 140 characters, has changed the way humans communicate.

In addition to being giant carriers of the world’s thoughts, Twitter and Facebook, the other ruler in a galaxy of social media, provide one more service. Once you sign up, they let you feed your great secret preoccupation—the Lives of Others. This is an especially convenient arrangement for famous people and their admirers (though it can be a curse too, because there are some rather neurotic people online). Social media allows celebrities to stay in touch with their fans. They value this because fans are wealth. Fans are crucial to the success of a film or IPL franchise or a late-career business venture. Fans could even help elect you Chief Minister once you are tired of setting cricket records.

The fans, for their part, are only happy to get a ringside seat to watch the lives of their idols. It is not surprising, therefore, that most of India’s prominent cricket players are active on social media. In fact, they are less guarded here, and provide us a more honest view of themselves. There is a flip side to this, of course. Easy and constant access to information about stars diminishes their aura somewhat. In the old days, you treasured every picture or autograph or handshake with a star because your worlds rarely met. That is no longer the case. The sheen of a star also dulls due to some conversational habits contemporary culture has spawned. Something surely comes crashing down when a world-class sportsman spells ‘you’ as ‘u’. But these are irreversible trends that we should ignore—and just enjoy the fun bits.

For example, a few days ago, Harbhajan Singh had an omelette at the Trident Hotel in Mumbai. He was charged Rs 1,000 for it. Amused and taken aback, Harbhajan laced up and jumped on to Twitter: ‘The Trident never fails to surprise me.just had the most expensive omelette for 1000rps! must have been made of golden eggs I guess..lol’. But at least Bhajji’s message did not contain the cacophony of exclamation marks often seen on Twitter. He restricted himself to just one. He spelt most words whole and correctly, and the ‘T’ in Trident was capitalised as it should be. ‘Never fails to surprise me’ and ‘expensive omelette’ were parts of the message over which a lesser man would have stumbled. Harbhajan did not. Someone is growing up.

In contrast stands this offering from Sushmita Sen, retweeted by Sreesanth: ‘Yesssssssssssssssss!!!!!!:))) RR superb win!!!! RCB well played!!!:)) what a match!!! Congratulations RR supported!!! :))’ Some mythological tales feature demons called mariliths, creatures with multiple arms and heads. Sen’s tweet is a marilith of a sentence, with multiple exclamation marks and smiley faces and an over-generous use of the letter ‘s’.

Virat Kohli is 24, successful and rich. He should be allowed his mistakes. But there are older people around him who need to tell him that the line between being careful about your appearance and being narcissistic is thin. Kohli’s Twitter account reveals him to be partial to ‘selfies’, pictures taken by a person himself. The background image on Kohli’s Twitter profile is a selfie of him wearing sunglasses indoors and fussing with his hair. It is not as cool as he thinks it is.

The rest of Kohli’s account is fairly sane and understated, with complete words and sentences. Like those of most Indian players, his Twitter stream is a mix of political correctness (‘Great show by our women’s cricket team yesterday. Wish the ladies in blue all the very best for #WWC13’), commercial promotion (‘Flying Machine’s Spring Summer Collection is out. Do check it out guys!’) and genuine sharing of experiences that even jaded sports followers will find interesting. For example, last October, Kohli tweeted his visit to Nike Inc’s headquarters in the United States. He shared a picture of himself beside a statue of footballer Ronaldo (the Brazilian one) and expressed delight at his poster appearing next to Maria Sharapova’s on one of the walls on the premises.

Social media also allows players to issue quick clarifications in case they find themselves in trouble. This saves time and eliminates the need for a press statement. A few days ago, there were reports of an exchange of words between the Kolkata Knight Riders’ Gautam Gambhir and the Rajasthan Royals’ Rahul Dravid. It is one thing for Gambhir to have a go at Kohli, who is junior to him. It is quite another to be accused of trash-talking Dravid, both senior to him in age and a certified legend of the sport. Gambhir controlled the damage to his reputation through Twitter. ‘Guys, u have got it all wrong. No harsh words exchanged between me n Rahul bhai. He was n will always be a respected teammate. No fuss plz.’ Let us forgive GG his sense of spelling.

At times, cricket people use Twitter to douse fires, and other times, to light them. The 140 characters turn into weapons that bring even powerful ministers to their knees. For all his faults, Lalit Modi did India a service when he tweeted the shareholding pattern for the proposed Kochi IPL franchise in 2010. One of the beneficiaries of the franchise was to be Sunanda Pushkar, wife (then girlfriend) of External Affairs Minister Shashi Tharoor. Tharoor was mentoring Kochi’s bid and the revelation of Pushkar’s involvement forced him to resign his ministerial post.

More recently, S Sreesanth called Harbhajan a ‘backstabber’ in connection with the now famous incident during the first IPL in 2008 when Harbhajan was reported to have slapped Sreesanth (another service to the nation). ‘All blamed me for getting emotional ..??c mon who doesn’t get emotional whn u know the person who u worship is a backstabbing person…Disgusting.. that’s all I can say…wht he did is completely out of control’ tweeted poor Sreesanth. Over the course of several tweets, Sreesanth hinted that Harbhajan did not slap but elbowed him, and that the video was with the IPL. ‘I want the world to c it’, Sreesanth said, sounding like Arnab Goswami. Perhaps, Harbhajan’s four-figure omelette bill was a Sreesanth shenanigan, achieved by pulling some strings at the Trident.

The refreshing thing about Mahendra Singh Dhoni is that he wears his clout lightly and makes his own rules (as much as he can). Both attributes are reflected in his online personality. One would not expect a captain to openly pull the leg of a junior teammate on a public platform. Captains are revered figures in the dressing room. They would be forgiven for not acknowledging a newcomer, however talented. But Dhoni has thumbed his nose at cricketing protocol with his good-natured ribbing of ‘Sir’ Ravindra Jadeja. The ‘Sir Jadeja’ jokes are just Rajinikanth jokes with a new name. They follow a hyperbolic formula, as evident in this yarn picked verbatim from Dhoni’s twitter stream: ‘On 17.4.13 no planes landed at delhi airport from 7.30pm till 8.30 as sir jadeja was playing badminton In a nearby farm house.’ The jokes are a laugh and have enlivened the present cricket season.

Social media has made keen observers of all. Consciously or not, many of us are perpetually in search of the next tweet or status update that will bring us fleeting attention in our online lives. Anything and everything could be an interesting post, and we have the technology to instantly share it with the world. So everyone is firing away. Celebrities are not immune to this epidemic. But the happy consequence of this is that even the traditionally self-centred are now sometimes curious about the world around them. Recently, Dhoni tweeted a picture of Alex, the official photographer of the Chennai Super Kings, tired and asleep at his desk. Social media also allows players to express their sense of humour. Rohit Sharma once tweeted a picture of Abhishek Nayar gorging on lunch in the Mumbai (Ranji) dressing room. Nayar, rarely short of words, for once looks stumped.

Dhoni, being a pet lover, frequently befriends security dogs at grounds and tweets about them. He is also not above promoting products on his account. It was through Twitter that many heard of a new Dhoni scent called ‘7 by MS Dhoni’. The name seems inspired in part by the designer denim brand ‘7 for All Mankind’. But it mainly has to do with the number seven being lucky for the Indian captain. He was born on 7 July 1981 and ‘7’ is his jersey number as well.

Through social media, even the most private of people sometimes allow you into their inner sanctum—past the door, the waiting room, the kitchen, and right to where they sleep. In 2010, Sachin Tendulkar, high on the company of friends and a bit of wine or champagne, tweeted a picture of himself just before hitting the sack at his Mumbai home. He had just returned from a four-hour dinner at the Zodiac Grill with Vidhu Vinod Chopra and Atul Kasbekar. It is a one-of-a-kind image. Earlier in the evening, he had tweeted a picture of the three of them at the restaurant, body language relaxed, eyes and smiles in possession of the wattage that comes from a drink or two. Another rare, candid glimpse of Tendulkar was this picture posted on his Facebook account late last year: of him sitting with two dogs one early morning in chilly Mussoorie. Greg Chappell had once said to Tendulkar, in homage to his stature in India, that he must have many friends. Tendulkar had calmly replied that the opposite was true. But at least on that freezing morning in Mussoorie, he had two loyal friends by his side.