Once Again to the Cricket Carnival 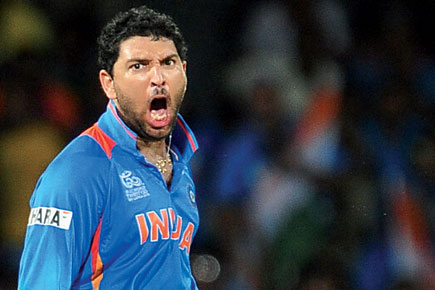 As he conducted the IPL 2014 auction in Bangalore on 12 February, the auctioneer Richard Madley seemed to be standing in an outsized Pepsi can. The image reminded you of a performance by a man the cola company recently unfriended from its payrolls— Amitabh Bachchan in a giant egg in My Name is Anthony Gonsalves. The can, however, was a microphone stand.

Madley wore, as promised in an interview in the days preceding the auction, a silk handkerchief in his coat pocket. Also as promised, he wore a tie, though it wasn’t “bright and jolly” as he had threatened. And in his left hand he carried the most important tool of his trade—a small wooden gavel, the rise and fall of which is watched breathlessly by cricketers desperate to dunk themselves in the gold river of the IPL.

Hearts break when players go unsold. In these times of live coverage on not just television but also social media, the ignominy is instant and public. Conversely, chests swell when players are bought for a high price. It is possible that for a day or two after the auction the chests of Yuvraj Singh, Dinesh Karthik and Jaydev Unadkat puffed to about a hundred inches. Hopefully, the usually surly Yuvraj also smiled a bit.

Madley is an auctioneer of some renown. One of his claims to fame is being the last man to hold an auction in Windows on the World, the restaurant atop the North Tower of the World Trade Center in New York. He also holds the distinction, if it can be called that, of conducting every IPL auction. Every single trade in IPL history has been announced by the thud of his gavel. This time too the sound echoed periodically at the ITC Gardenia, drowning out the drumbeat surrounding the findings of the Supreme Court appointed Mukul Mudgal Report.

The Mudgal Report confirmed that Gurunath Meiyappan was involved in betting and leaking confidential information pertaining to the Chennai SuperKings (CSK). Meiyappan is the son-in-law of N Srinivasan, the Indian cricket board President, and an official of CSK, though Srinivasan would have us believe otherwise.

The Mudgal report was hot news for a day. But the IPL auction overshadowed it. It was the IPL that dragged Srinivasan into serious problems last year due to revelations about his son-in-law. And it is the IPL that, with its auction, helped him divert attention away from the Mudgal Report, albeit temporarily. Such is the irony and fickleness of Indian cricket. The IPL auction progressed as if nothing was wrong with Indian cricket, and once more reminded us of the power not just of some cricket officials but also of the game’s popularity.

It is time, perhaps, that the Board gets itself a new name. A powerful body. So much money and clout. Never guilty of anything. And what is it called? Board of Control for Cricket in India. It conjures up images of an office with a lot of old files. Call yourself the Bada Bing Club, guys.

Nevertheless, the auction made for compelling viewing for a variety of reasons, about a hundred of which had to do with Juhi Chawla. Age has not diluted the woman’s charm. She is a song, unlike some others in the room with faces mangled by indulgence and plastic surgery. They are at best item numbers.

It was also interesting to see the teams adopt poker table body language, unwilling to reveal their hand. In a piece on Starsports.com, Aakash Chopra provided an insight into buyers’ strategy: ‘Show no interest at the beginning and just when the player is going unsold, raise a reluctant hand. That’s the best way to strike a good bargain,’ Chopra wrote. This ruse was evident when Mumbai allrounder Abhishek Nayar went on sale. For a moment or two Nayar, a colourful man who often works out with tyres, seemed stuck at his base price of Rs 30 lakh. Suddenly hands went up for him, the bids rose exponentially, and within seconds he was sold for a crore to the Rajasthan Royals. Yuvraj Singh, of course, took home 14 times more, thanks to Vijay Mallya’s largesse. Who cares about the pending dues of Kingfisher staffers?

As the auction aired on television, someone said, “Ped lagaaya Modi ne, aam koi aur kha rahaa hai (Modi planted the tree, someone else is eating the mangoes).” Lalit Modi, the IPL’s exiled former boss and Srinivasan’s bitter adversary, is miles away in London. When Open asked Modi about Srinivasan and the secret of his power, the focus changed from mangoes to melons. In an email interview, Modi said: ‘There is an old saying, ‘Friends (in this case, I mean friends and allies within the BCCI) are like melons. You may try fifty before you find a good one’. And that is exactly what Srinivasan has done by ensuring that his supporters get plum postings within the BCCI, thus reducing the BCCI to a bunch of silly yes men. Even as the probe is on in the betting scandal of the IPL, he is continuing as if nothing happened. At the ICC level, he has simply used the commercial muscle that India holds in the world game to bulldoze people into seeing things his way. By keeping the ECB and CA happy, he has been able to persuade and split the world cricket body, which is not good for the game.’

Modi says he has moved on and doesn’t have to be a part of the BCCI to fulfil his new ambitions, but surely a part of him is plotting a return to Indian cricket administration. It won’t be easy, however. Srinivasan’s phlegmatic manner and dead-fish stare belie his fierce fighting spirit. Besides, Modi is among those BCCI officials under investigation by the Enforcement Directorate (ED) for foreign exchange violations. His Indian passport too has been revoked.

Modi, however, has got three quick wickets, as it were, that might just open a window for him. One is his expected victory in the Rajasthan Cricket Association elections. Two, the Bombay High Court has set aside the opinion formed by the ED to hold adjudication proceedings against Modi. Three, the Mudgal Committee Report has gone against Srinivasan’s interests. A sense of vindication marked Modi’s statement on the findings of the probe. ‘Glad to see that the Justice Mudgal report confirms just what I had been saying,’ Modi said. ‘Life ban on all connected is a must. So I guess Srini’s two-day victory as future warlord of cricket was shortlived.’

But what about the charges against him, the nine cases of foreign exchange violations? And wasn’t he liable to get arrested if he came to India? ‘The Enforcement Directorate is investigating various FEMA violations by the BCCI. For your information, I did not have any cheque signing authority nor power in the BCCI,’ Modi told Open. ‘All foreign exchange compliances as per division of work in the BCCI had to be done by the Honourable Secretary and Treasurer. Incidentally, the then Secretary was Mr. N Srinivasan and he was handling all FEMA matters. I have been issued notices only for being the IPL Commissioner and Chairman.’

Modi emphasised that his security cover and passport were withdrawn following his tweets that led to the disclosure that the late Sunanda Pushkar held sweat equity in the now defunct Kochi Tuskers IPL franchise, whose bid was backed by Shashi Tharoor, then India’s External Affairs Minister. He has challenged the passport revocation in the Delhi High Court.

Cases of various factions in court, allegations of match-fixing, and ostentatious displays of wealth—the source of which remains opaque. Meanwhile, the team continues to flounder overseas. All in all, a normal season in Indian cricket.