No. 1 vs Small Rainy Isle

When was the last time you heard of 100 per cent match ticket presales for an entire Test series? That’s the level of anticipation for the India-England series that gets under way on 21 July 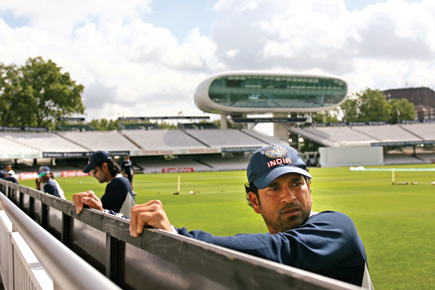 When was the last time you heard of 100 per cent match ticket presales for an entire Test series?


Here’s a simple, yet telling, comparison. All three Tests in the recently concluded series between India and the West Indies in the Caribbean played to near empty stands. This was the first series featuring India immediately after their World Cup triumph, and you might have imagined there would be more interest. Apparently not. Moving to the other side of the Atlantic, even before the India-England series can get underway, tickets to all four Tests have been sold out. Clearly, it takes the promise of a real contest to arouse spectator interest.

Tickets for the first Test of the series, at Lord’s, were sold out in December 2010; by March 2011, Edgbaston and Oval had sold out as well. To Lord’s first. Interested buyers had to enrol for a ballot on the night of 13 December 2010 and the lucky few were notified by the MCC. Members too had to enrol for the ballot and did so happily. This is no run of the mill series, after all; it involves the two best sides in world cricket today, and tickets understandably are at a premium. For the record, close to 500,000 tickets, at £50–80 apiece, have been sold for the four Tests.

When India first toured England in 1932, the headlines summed up the visit beautifully. ‘No politics, no caste, just cricket,’ chirped the Evening Standard. ‘18 players speak 10 languages,’ read another in Birmingham Post. Media coverage had started a month-and-a-half earlier. The Times, London, wrote (on 1 March 1932): ‘We still play cricket in India. Political rough houses, communal riots, Congress hartals, Bengal terrorists, and the 10 per cent cut in pay have all done their best to queer the pitch for us, but the game goes on. The Delhi police may be having three sharp rounds with a rioting crowd in Chandni Chowk… but a mile or two away on the club ground set in the gardens that 400 years ago Shah Jehan built for his princess, a Roshanara side will be playing the Punjab Wanderers or an Army team from New Cantonments will be fielding in the white sunlight.’

With a few tweaks here and there—such as replacing ‘communal riots’ with ‘the 2G scam’ and ‘Bengal terrorists’ with ‘the Lokpal fracas’—you might get away using the first few lines of the same report in 2011. What has changed, though, is the quality of cricket played by the side that now represents India and the crowds who come to see them play—a transformation that has placed the financial reins of the cricket world firmly in the hands of the BCCI (Board of Control for Cricket in India). In 1932, much was made of the Indian team under Porbander not losing too badly. Being competitive was nearly as good as winning. The 24,000 at Lord’s then, Wisden wrote, thought the ‘tourists acquitted themselves with great credit’. Of the spectators, only a handful were Indians.

Come 21 July 2011, Lord’s will see an Indian invasion. From recent experience, it’s safe to conjecture that the entire stretch between St John’s Wood tube station and the WG Grace Gate will be chockablock with Indian flags, painted faces and overladen trucks blaring Bollywood music. In fact, in a week from now, the area around St John’s Wood, one of the priciest neighbourhoods in Central London, is expected to undergo a radical makeover. It might soon pass off as a festive Delhi mohalla. And nothing short of an Indian win will do for this swarm of cricket-crazy Indians, who are expected to fill up more than two-thirds of Lord’s capacity of 28,000.

Their belief, recent history is proof, rests on a firm foundation. This is undoubtedly one of the best pace bowling attacks India has ever had. As Yuvraj Singh pointed out to this author before leaving for England: “We have the variety and the ability to get England out twice. No reason why we can’t repeat 2007.” While Zaheer Khan is surely one of the best in the world in Test cricket, a back-in-form Ishant Sharma will add a lot of venom to the Indian pace attack. Sreesanth too should be a handful in the heavy English conditions. The only worry perhaps is Harbhajan. But the Indian team will take heart from his showing at Dominica (where India played the concluding Test with the West Indies).

The batting gives no cause for worry. Our ageing legends are still good enough to take on the best in the world. The South Africans and Australians have been at the receiving end in recent times and it’s time the English were subjected to some torture at the hands of the Dravid-Tendulkar-Laxman troika.

The occasion, suitably momentous, has added to all the build-up and intensi­ty: it’s the 2,000th Test match and the 100th featuring India and England. Soon after winning the Ashes last December, a section of the English press started de­claiming that England were the real No. 1 side and that India would get a feel of it this summer. Darren Gough suggested England were good enough to beat India 4-0. James Anderson is similarly optimis­tic. He says the English are well on their way to becoming the No. 1 Test team, with the India series just another step on England’s march to pole position. The Indians aren’t sparring yet, but they aren’t silent either. Almost every Indian cricketer has expressed confidence that the team is capable of beating England in England. Host broadcaster ESPN-Star Sports has been doing its bit to stir up this nationalistic frenzy, airing programmes titled ‘India Victorious’, ‘Conquering England’ and suchlike.

Not to forget Tendulkar, who will sure­ly want to chase one of those last elusive milestones of his international career—scoring a hundred at Lord’s and getting his name up on the honours board of Lord’s centurions. When India last played at Lord’s in 2007, hundreds of MCC members had turned up to watch Sachin score a century. You could hear the murmurs the moment you stepped out on Marylebone Road and over glass­es of champagne at the Tavern or Coronation Garden (a popular picnic spot on match days). When Monty Panesar trapped Sachin LBW for 16 in the second innings of the match, you could hear a pin drop in the Long Room. As a member later recounted, “When Sachin walked past us to disappear into the Indian dressing room, the entire Long Room stood up to applaud him. The loss was ours. We’d have given anything to see Sachin’s name on the honours board.” Very few had hoped they would get an­other opportunity to see the master have a go at it. Reassuringly for all those who want to see it happen, and they must be in their hundreds of thousands (or is it millions?), it’s a man who has rediscov­ered his art and his genius in a way only he can. While taking time off cricket, Sachin has visited Lord’s a number of times in the past few weeks. Not to prac­tise, but perhaps to make the necessary mental adjustments to gear up for the challenge ahead. His 100th internation­al 100 at Lord’s on the occasion of the 100th Test match between India and England! It doesn’t get more romantic.

Commenting on India’s 1971 victory against England, a series win that ranks as a watershed in India’s cricket history, Dicky Rutnagur wrote in Wisden, ‘In Bombay, the birthplace of Indian cricket, unprecedented scenes were witnessed on the night of August 24, the day India beat England in the third Test match at The Oval. There was dancing in the streets. Revellers stopped and boarded buses to convey the news to commuters. In the homes, children garlanded wireless sets over which the cheery voice of Brian Johnston had proclaimed the glad tidings of India’s first Test victory in England, a victory which also gave them the rubber.’

Should India do an encore of 1971 this time round, on the night of 22 August (the last day of the final Test of the series), the scenes of revelry at The Oval, the match venue, will surely mirror the cele­brations back home. Envision a hysteri­cal swarm of 15,000-plus Indian support­ers piling out in cars and trucks, traffic coming to a standstill, cheers of Ganapati Bappa Morya reverberating all over the ground, and amused residents looking out of their windows in complete bewil­derment. The days of muted celebrations are over. It is a new, expressive India, and it will want an Indian takeover of London if Dhoni’s team retains its No. 1 ranking at the end of the series.

Can’t wait for the umpires to walk on to the field and call ‘play’.