Is Cricket Going the Hockey Way?

Will the shortsightedness of India’s cricket administrators end up destroying India’s national passion the same way Indian hockey was compromised in the 1960s and 1970s? 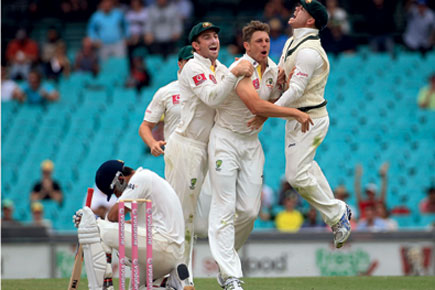 Will the shortsightedness of India’s cricket administrators end up destroying India’s national passion the same way Indian hockey was compromised in the 1960s and 1970s?


The Sydney Test had just got over and the Australians were making their way back to the ground to celebrate. They had steamrolled the Indians and were now up two nil in the series. More importantly, India had been vanquished without a fight and Australia had scored 600-plus runs for the loss of one wicket after being 3-37 at one stage. It was time for some hard introspection. Just then did a media release from the BCCI (Board of Control for Cricket in India) land in my inbox. It had the detailed schedule of IPL season five, the longest IPL till date and one that will continue for seven weeks between 4 April and 27 May. Within two hours of the surrender at Sydney, the BCCI had sent out the IPL schedule. The startling insensitivity of this act communicates two simple truths. One, the Board has no empathy with a cricket-loving public outraged by the Sydney surrender. Two, a bolder message: criticise the Board all you will for its misplaced priorities, it just doesn’t give a damn.

The cocky men who control Indian cricket are certain that the public outrage over the team’s performance in Australia will pass. Soon after the team returns to India and wins a few inconsequential matches at the Asia Cup in Dhaka, the Australian nightmare will be forgotten. Cricket fans, they are confident, will yet again embrace the IPL and the Indian cricket soap opera will continue. Simply put, they have started taking the fan for granted, as if the fan were dependent on the game, and not the other way round. The filthy-rich BCCI seems cocooned in its certain knowledge that sponsors and advertisers will perforce invest in cricket, and fans, desperate for something to cheer about, will get over the ignominy of Australia sooner than later.

It’s possible that the BCCI has pushed the limits of complacency beyond the fan’s endurance. He might have forgotten the whitewash in England had India been not so limp in Australia, but a repeat drubbing will doubtless reopen those wounds, and the IPL will be no kind of palliative. Indian cricket is at a new low and there is no running away this time from the urgent need for course correction. Not just talk, but action. The fan will question the judiciousness of statements like the one made by the Chairman of Selectors just days before the Perth Test, when he said Dhoni’s captaincy was not under the scanner.

Either he saw something we didn’t—and what it might be beats the imagination—or it was just bravado. Maybe Kris Srikkanth has changed his mind since Perth—the worst of the seven straight overseas losses, with the match getting over in just eight sessions. India haven’t lasted the full five days in any of the Tests, a good-enough standalone statistic to prove how competitive the team has been on this tour.

The parallels with Indian hockey in the 1960s and 1970s are remarkable. Having won six straight gold medals at the Olympics between 1928 and 1956, Indian hockey officials had started to ignore the signs of alarm gradually creeping up on the horizon. That all was not well with Indian hockey was evident when SM Sait declared in 1962 that “we have to concede that our standard of hockey has deteriorated”. In his view, Indians had erred by not adapting to the changed tactics in world hockey. But perhaps, the deeper malaise was the provincial rivalry. Indeed, everybody closely associated with Indian hockey after the 1950s saw this at the root of the ills that beset the game in India. No one explained this better than Charanjit Rai, who in a prescient article in Indian Olympic News noted that the administrators weren’t guiding the sport down the right path. In an early precursor to Dhanraj Pillai’s famous lament in the early 2000s against the czars of Indian hockey, Rai argued that the players would be affected ‘unless treated fairly and sympathetically,’ unless their workloads were properly managed. Indian hockey, he forecast, was staring down the barrel.

The negative sentiment was best summed up by The Hindu, commenting on India’s performance at the Mexico Olympics in 1968: ‘Gone are the days when hockey fans all over the world were only concerned with the margins of India’s victory. Today it has become a matter of survival and at the moment India is finding it difficult even to qualify for the semi-final…’

Soon enough, India did fail to make the semi-final and ended a dismal seventh at the Montreal games of 1976. Ever since the Los Angeles Games in 1984, Indian hockey has been in a downward spiral.

The shortsightedness of the administrators cost India’s leading Olympic sport dear in the 1970s and 1980s. Administrative ineptness led to sponsors refusing to embrace an ailing sport. Cricket benefitted at the time at the expense of hockey. With the 1983 World Cup victory coinciding with our declining performance in hockey, cricket soon became the country’s singular national passion with big money flowing into the game after the opening of the Indian skies in 1991.

Indian hockey’s debacle seems to be re-enacting itself in 2012, only this time it’s cricket that is at risk of sliding into disfavour. With London 2012 just round the corner and with Indian athletes in with a real chance to win some medals (there is talk of seven genuine medal prospects), cricket might soon find itself in a similar predicament as hockey if a myopic BCCI continues to hurt the long-term interests of the game in the country.

A conversation in the Perth press box was telling. A young television journalist, who has been following the Indian team around for almost five years, was expressing his anxieties to one of his colleagues in the following words: “If we continue to play like this, the company will no longer send us to cover cricket two years from now. Results of overseas Test series will be a foregone conclusion, and it will soon make sense to spend time in Bhiwani instead… we might find ourselves covering the boxers if they win a few medals in London. Do the IPL back home and boxing abroad…”

The comment was made half in jest, but it wasn’t all that far-fetched. If the media turns away from the game or is forced to do so in the years ahead—unthinkable though it may seem in view of the media glare on cricket at present—the game will soon start to lose its legions of fans. If the national team’s performance continues to be on its current downward spiral and the cricket administration is content to ignore the signs of alarm, the media might willy-nilly be forced to turn to other viable pastures. Dwindling fan passion will mean dwindling media attention, which in turn will imply tepid sponsor and advertiser interest in the days to come.

The IPL too will be affected sooner than later. Already in 2011, the IPL television ratings had started showing a downtrend. Misery piled up over the past seven months in the form of seven straight overseas defeats, and the BCCI’s cynical, business-as-usual ways will come to haunt it at some stage. Quite aside from the issue of fan following, which is not always the most discerning, is the BCCI content in driving the game towards a future where the national side might excel in the flat-track shorter formats while being suspect in the more rigorous, more demanding Tests? When was the last time India produced a top Test cricketer? How long will we continue to pay our way to IPL matches knowing that soon after these inconsequential slugfests are over, India will once again stand exposed against quality Test teams like England, South Africa and Australia? Why can’t the BCCI encourage MS Dhoni to do a Michael Clarke and for a change skip the Champions League? Clarke decided to stay away from the League and offered simply this by way of a reason: he wishes to be remembered as a good Test player.

Indian cricket urgently needs a systemic overhaul, and it must start at the top. First, we need a reassessment of our priorities. We should then identify a list of players who will represent India only in Tests. It will be up to the Board to compensate these players for their monetary losses in not playing the IPL or Champions League. We need quality Test players who will not get injured by putting their bodies through hell at the height of the Indian summer. It’s time to start planning for the England tour of India in October-November, for if we start losing at home too, there will be no looking up from there for Indian cricket.