India, the new world champions, took to the field for the first time after their World Cup triumph, but why didn’t anybody care? 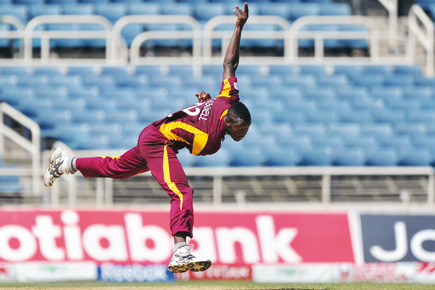 India, the new world champions, took to the field for the first time after their World Cup triumph, but why didn’t anybody care?


It is hard to think of a tour in recent memory that seemed so pointless. In an earlier age, tours to the Caribbean evoked anticipation and terror in equal measure. The Indian team’s present hop across the islands elicits resignation and plain surrender—not from the tourists who are duly thrashing their listless opponents, but from the spectators.

There is a special energy to watching a team take the field with their newly earned status of world champions. There is promise of excellence. Indian fans must have looked forward to seeing their team after the euphoric World Cup triumph—only they are unrecognisable from the team that won in Mumbai less than three months ago.

Of the playing eleven in the World Cup final, only four players turned up in the one-day series against the West Indies. Then news came that Zaheer Khan and Sreesanth would also miss the Test leg of the tour. The Indian Test team in the Caribbean resembles a newly constructed artifice, with the absence of as many as six regulars. In addition to the bowlers, the absentees include Tendulkar and openers Sehwag and Gambhir—the reasons vary from rest to injury. Instructively, not one of them missed the IPL.

Yet, the apathy surrounding India’s tour to the West Indies can only partly be explained by the fatigue induced by the IPL, among both players and spectators. Another answer may lie in the mighty fall of Caribbean cricket, so much so that what is effectively India’s B side will in all likelihood end up beating the sorry West Indies comfortably.

But all this also points to something else—the continuing and alarming devaluation of international cricket. There are too many meaningless games, a series lost or won hardly matters in the long run. Occasionally, the Ashes and the World Cup can enliven the senses and relieve us of the ceaseless monotony, but mostly international cricket takes place without a sense of occasion, or the sense that its events are tied to a longer arc.

International cricket desperately needs a larger narrative, a thread to hold together disparate contests and imbue them with meaning. This search for a solution led the ICC last year to institute a World Test championship (whose first playoffs are expected in 2013) and an ODI league, spread over three years, whose first champion will be crowned in 2014.

Today, cricket has a cluttered and thoughtless calendar of fixtures. Barely a week after the World Cup, Australia toured Bangladesh and destroyed them in three absurdly scheduled one-day matches. Neither the victors nor the vanquished seemed to derive any pleasure from the exercise. This year, India tours the West Indies and England extensively and hosts them in the autumn, barely a few months later. This lack of imagination can be seen across the board in the ICC’s Future Tours Programme, the calendar of international games.

The consequence of a good structure is to make the average game compelling, by tying it to a larger context beyond the immediate. The great contests, like India’s tour of England next month or Australia’s tour of South Africa later this year, can inspire interest without the need for any external incentive. But it is the other games (like India’s present tour), mismatches often, yet so vital for the health of cricket, that need an overarching structure to retain interest.

The ICC’s move last year is an admission that cricket needs such a structure. But it seems that cricket is selectively borrowing these ideas from the template of European and American leagues, without providing for its own unique demands and the nature of the sport.

The World Test championship is an instructive example. The ICC envisages the top four teams facing each other in a playoff, and in all likelihood, this will be decided by points and technicalities rather than the compelling concept of the rubber. The disastrous Asian Test championship (played in 1999 between India, Pakistan and Sri Lanka) should have served as a warning—it was evidence of how the nature and format of Test cricket makes it resistant to being condensed within the somewhat uniform framework of a multi-nation tournament. To tamper with it is to dilute its essence.

Whenever we recall memorable Test contests, we think in bilateral terms. From Bradman’s last tour in post-war England (superbly chronicled in Jack Fingleton’s Brightly Fades the Don) to, in recent times, India’s audacious come-from-behind victory in 2001 to deny Steve Waugh his final frontier and the 2005 Ashes, there is an essential bilateralism to Test cricket.

Therefore, a World Test championship, even while invoking a global contest, must accommodate what makes Test cricket so compelling—the concept of home advantage and the languorous narrative of a duel spread over weeks.

A tightly structured calendar should ensure that all the Test teams play each other home and away over a four-year cycle. In the end, the top two Test nations should compete in a five-Test rubber for global supremacy, with the top-ranked team hosting the team placed second. This would give greater meaning to rankings, as there would be obvious advantages to finishing first.

The proposed ODI league seems, at first glance, an even more half-baked idea. It neither fulfils the conditions of a league nor makes any concessions so that the concept can be suitably adapted to cricket. A league becomes redundant in the absence of a unity that binds, ensuring each team plays each other an equal number of times. The league, beginning 2011, will crown its first champions three years later. This is laughable — no league in the world has a gestation period this long.

Instead, cricket should channel its small pool of teams to create an annual ODI shield. The insipid Champions Trophy can be scrapped to make way for the tournament, whose hosting can be rotated every year. To distinguish it from the World Cup, only the top six teams should take part (including the hosts).

This will provide meaning to the procession of one-day series, as there will be a genuine incentive to do well, to qualify for the annual tournament. The ODI shield could take part in March or April, when most countries would be able to host it, and, symbolically at least, it would announce the end of a season.

Finally, solutions may vary but India’s tour of the West Indies is another sign that surgical intervention is needed. Watching the current series, one image left a deep impression. As West Indies lost their third consecutive match to concede the five-match series to India, one struggled to detect emotion in either team. In an empty stadium, both teams shook hands serenely. There was no intensity in the air, no whiff of competition. It almost seemed that the lack of enthusiasm from across the fence had permeated through to the players.

But perhaps that should not be a surprise. In a bloated season, with no beginning or end, international cricket today inspires little besides indifference.