Komaleeswaran Sankar officiated as an assistant referee in three matches at the 2002 World Cup. He shares the thrill of being the first Indian ever to participate in a World Cup 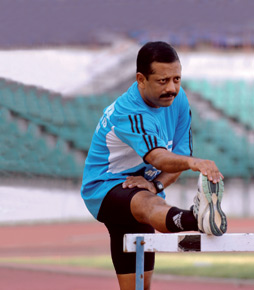 Komaleeswaran Sankar officiated as an assistant referee in three matches at the 2002 World Cup. He shares the thrill of being the first Indian ever to participate in a World Cup

In India, footballers often hang up their boots to pick up the whistle. This is the usual trajectory of a football career—first he is a player who occasionally doubles as a referee; and then, when his dreams and energies are spent, a full-time referee. In the case of Komaleeswaran Sankar, a bank cashier who began playing and overseeing local matches in the late 1980s, the reverse almost happened—he was on the verge of hanging up his whistle.

That was in response to an incident in the early 1990s. Still young in his refereeing career, Sankar had gone to watch a football match in Chennai, where a friend, Victor, was the referee. Matches in the city’s league, especially in the early 1990s, were often unruly and sometimes broke into fights. During the course of the match, Victor pulled out a red card to send a player off. Next, he was assaulted by the player, and by the time Sankar and others could intervene, Victor was lying unconscious on the ground. In the next few weeks—that he spent in the hospital—Victor would keep losing and regaining consciousness. He never fully recovered, and was left partially deaf.

Sankar and some of his other friends ensured that Victor was compensated and an apology tendered. But the player, after a brief suspension of a few months, was back on the field, while Victor gave up refereeing.

“I realised then,” says Sankar, “what a thankless job refereeing was. The players treated you with no respect, the fans booed your decisions, and you could so easily wind up in hospital with a ruptured ear drum.” For a few days, Sankar remembers, he contemplated quitting. “But I just couldn’t,” he says, “I just couldn’t get myself to quit. I just felt I was not done yet.”

By the time Sankar retired in 2007 at the age of 45, as mandated by FIFA rules, he was India’s most successful referee. Apart from being the main referee in many top national matches, Sankar became an assistant referee in international games at marquee tournaments like the 2000 Sydney Olympics, the 1998 Bangkok Asian Games, and a number of other top international tournaments like the Confederation Cup, Junior World Cup, and the Under-21 World Cup.

In 2002, his moment of glory arrived. In a tournament that no other Indian player, official or administrator has come close to participating in, Sankar was chosen as an assistant referee for the 2002 World Cup. He almost made the cut in the 2006 edition in Germany too, but was asked to stay back at the last minute—for unexplained reasons.

In all, Sankar was an assistant referee in three matches at the World Cup. Despite all his preparations leading to the tournament, he remembers being overwhelmed when he walked into the stadium for his first match: between Croatia and Mexico. “I had mentally prepared myself through the months leading to the game, imagining the crowd and the match. But that day, as the two teams lined up to sing the national anthem, I couldn’t believe I was standing there, in my yellow and black uniform, with a whistle and flag in my hand, facing a huge enthusiastic crowd, and about to officiate at a World Cup match. It is something all referees dream of. And for us Indian referees, it is thought so impossible that we do not even entertain it in our dreams.” For the first few minutes of the match, Sankar recalls struggling to keep his eyes dry.

In the sixtieth minute of the match, when neither team had scored, Sankar kept pace with Mexican forward Cuauhtemoc Blanco from the side, as he manoeuvered around defenders to reach the box, just inches away from the goalkeeper. However, a Croatian defender, Boris Zivkovic, perhaps sensing the danger Blanco posed, tripped the Mexican. “The main referee (Jun Lu from China) saw something [foulish] had occurred and blew the whistle. He looked up at me, and I nodded back. I told him it was a foul tackle,” he says, “When Lu awarded Zivkovic a red card, I only realised later that I had become part of the tournament’s first red card.”

For the next month, Sankar travelled across the sea between Japan and South Korea, undergoing FIFA’s intense training for referees. He was an official for two more matches: Belgium versus Russia, and Tunisia versus Belgium. “I would occasionally worry about getting injured, and perhaps missing out. But other than that, I couldn’t have been happier.” When FIFA-appointed counsellors would speak to him to gauge his mental state, Sankar would tell them, “Why would I be stressed? I’m just happy to be here.” He stayed on till the first two quarterfinals, after which he returned to India.

In India, Sankar was considered a tough and fearless referee. It is said a top football club in Goa whose owners are considered politically powerful would protest whenever Sankar was made referee of a match involving the team, because he was known not to favour anyone. “In India, very few football referees, especially those in the 1990s, had as much integrity,” says PK Madhavan, a former football player and the current vice-president of the Chennai Football Association. “Tournament organisers, bettors, team administrators and players were known to influence referee decisions. But Sankar was not like that. And because they knew of his principles, no one messed with him.”

Sankar was first noticed as the referee of an East Bengal-Mohan Bagan match in Bangalore in 1994 that ended in a 3-3 draw. As always, the match between these two rival clubs turned unruly. But Sankar kept the match under control, delivering a total of three red cards and awarding two penalties. Madhavan says, “In such high-pressure matches, most referees resist taking harsh decisions, however justified they might be. But Sankar would always stick by his decision, implementing the rules fairly. Often, I remember, there would be police escorting him during and after a match—because his decisions would upset players and fans.”

He became a FIFA assistant referee in 1995, choosing to become what was formerly known as a linesman, as opposed to a referee, because it was believed that success as a referee requires one to be not just sharp but also physically imposing. Sankar, just five feet three inches tall, was just too slight of build. However, he kept refereeing domestic matches.

Throughout his career with the whistle, Sankar worked a 9-to-5 job as a cashier with Indian Bank in Chennai. Every morning, he would wake by five, jog, do yoga and lift weights before turning up for work. He would take unpaid leave to officiate matches, some of which earned him, at least early in his career, only Rs 100 per game. His frequent absences from work also meant that he would never get a promotion. “Most of the time, I wouldn’t have money and would have to borrow from friends and family so I could train and travel to various parts where I was being invited to officiate. When I would have money, I would have debts to clear,” Sankar says.

Refereeing in a World Cup, Sankar says, isn’t easy. Referees, who are often twice the age of players, have to be in great physical shape. They have to be able to sprint across the field, keeping up with players and closely tracking the action. “And it’s not just being as physically sharp as these top players,” he says. “You have to be mentally prepared to be on top of your game, scrutinising the on-field drama and theatrics, and making crucial decisions.”

Once Sankar learnt that his name was on the list of probable assistant referees for the 2002 World Cup, he bought an air-conditioner for his bedroom for the first time because he knew his hotel rooms in Japan and South Korea would be air-conditioned. “I wanted to recreate the same environment. I didn’t want anything new that could disturb my sleep pattern,” he says. He also took four months of unpaid leave from work to live and train in Bangalore, where the temperature he believed would be closer to the mild temperatures of South Korea and Japan. Because Japan is around three hours ahead, he started sleeping and eating his meals accordingly. “So I would be working out at two in the morning, having breakfast by four and lunch at 10. I even started seeing a counsellor and even made my wife attend some sessions to ensure I was mentally fit. It now all seems a bit loony, but I wanted to be prepared and leave nothing to chance.”

Along with the other selected referees, Sankar had to report a month early to make the final cut. Each of them was put through intensive fitness tests, one of which was a requirement to run 2,700 metres in less than 12 minutes. Sankar could do 3,000 metres in the time allotted.

With the money he made at the World Cup—about $30,000—Sankar was able to purchase a flat in Chennai, which he named ‘2002’. He now lives in Kuala Lumpur, where he works as a referee development officer for Asian Football Confederation. “Whenever I sit down to watch a World Cup match on TV now,” he says, “often, instead of watching the players, I find myself looking for the referees, thinking of how I too had once been there.”