Is it the end of sporting Brahminism as well? 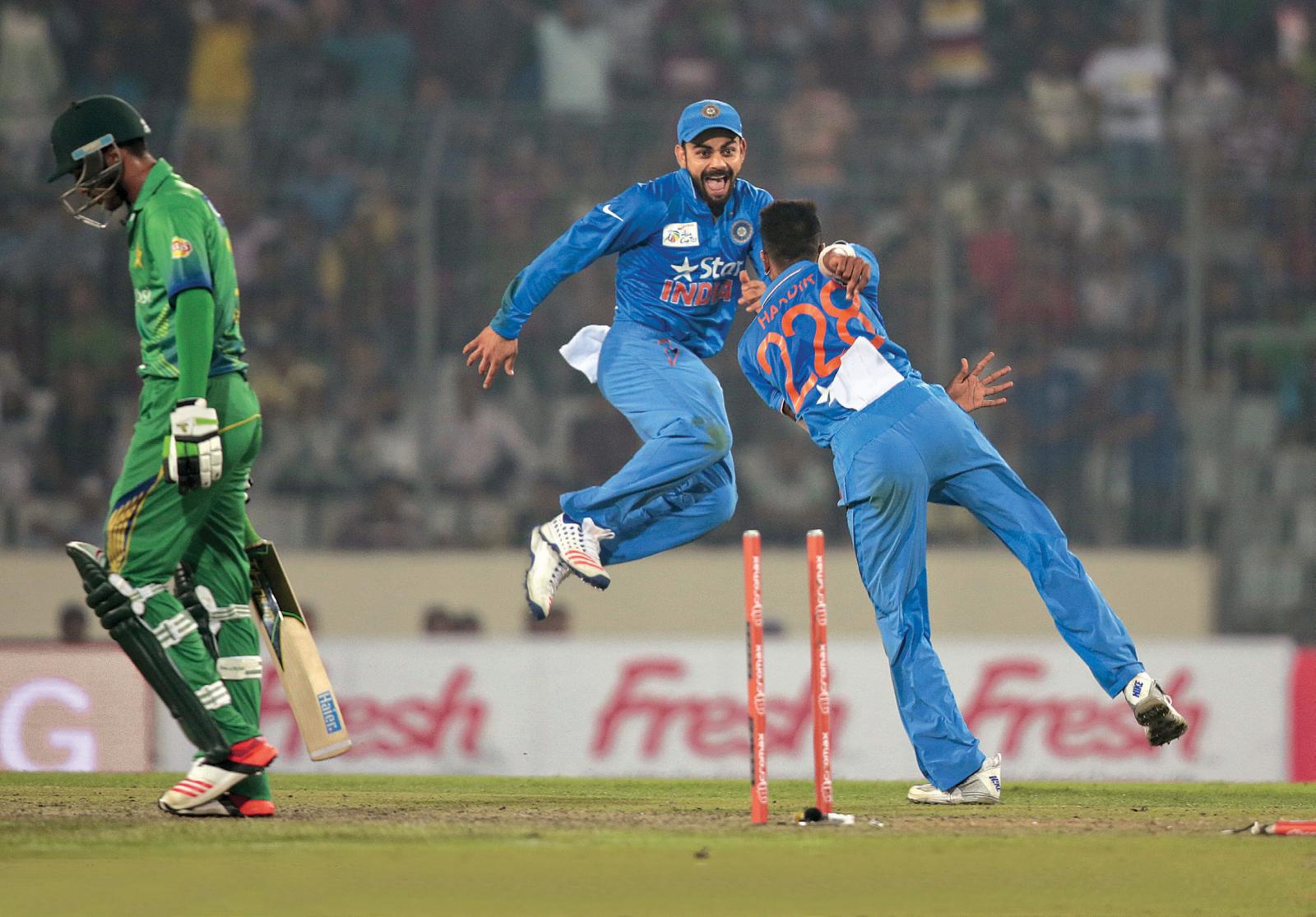 Having watched India defeat Pakistan in the Asia Cup T20 group match in Dhaka on 27 February, the feats that linger longest in my mind aren’t the devilish bowling of Mohammad Amir, all bustle and swerve and pace, nor the bewitching batting of Virat Kohli, who had a riposte for everything hurled at him. They are, instead, some instances of India’s fielding: specifically, the two run-outs of Pakistan’s top-order batsmen—including Shahid Afridi, the captain—which demoralised the men in green.

In international cricket, a run-out can corrode a batting side. The mode of dismissal is seen as wasteful and careless by any line-up at the best of times; but when it is effected by electric fielding—a combination of physical swiftness and mental sharpness: a swoop, a throw, a rattling of the stumps—confidence plummets in the opposition’s dressing room. Blame is laid, by the departing batsman on the one left behind at the crease; incoming batsmen are scared of taking sharp singles and aggressive twos; the strike rotates less well, if it rotates at all; and the fielders loom large in the batsmen’s peripheral vision, like predators on a savannah.

India fielded ferociously: stinging shots were stopped; balls were chased—by Jadeja, Raina, Bumrah, Rahane, Kohli, Pandya—all the way to the boundary rope, where they were hauled back after slides that were vigorous, balletic and precise. Each dive, each hauling back of the ball, saved precious runs, adding to the consternation in the batsmen’s mind. As an India fan, this was all a much finer treat than watching the team bat and bowl. I have watched India play since I was a boy and I can say, with hand on heart, that I haven’t seen an Indian side field as well as this one. If there has been a revolution in Indian cricket that should be hailed, it is the Fielding Revolution.

The first time I attended an India match that I can recall with clarity was in December 1974 at the Feroz Shah Kotla stadium in Delhi, when we took on Clive Lloyd’s team, then not quite invincible, but one that was at least twice as good as the Indian side of the time. I recall the muscular grace of the West Indians, dazzling to young Indian eyes: Clive Lloyd in the covers, Viv Richards, the bounding Keith Boyce, Andy Roberts, and Bernard Julien. How swift and strong they were, and what a contrast to the many lumbering Indians in the outfield.

India’s fielding revolution has put an end to namby-pamby and self-destructive elitism. There is glory now in the dive, acclaim in the chase, and a new celebration of physical vigour

That Indian team had some of the worst fielders in the country’s history: tubby Prasanna, slow- moving Bedi, stocky Hemant Kanitkar and a man— Parthasarathy Sharma—who was so bad in the field that a groan went up each time the ball was hit in his direction. The irony was, of course, that India then had close-in fielders to make the mouth water: Solkar, Abid Ali and Venkat. But if the ball were hit past them, forget it. Only Brijesh Patel, who patrolled the covers with an athleticism improbable for a Gujarati of his generation, could match the West Indian out- fielding. The crowd adored him for that, even as it despaired of his woeful technique against the short ball when he batted.

For years, the Indian fan has suffered the indignities heaped upon him by India’s fielders, while marvelling at the feats of fielders from other sides. Why did we drop so many catches? Why did we never run anyone out? Why were our batsmen always cut off in the prime of an innings by a breathtaking catch by an Australian in the slips, a South African at deep mid-wicket, a West Indian at gully, an Englishman at long leg?

Part of the problem was Indian mobility, or the lack of it. Our cricketers weren’t fit enough, or professional enough. They didn’t put in the hard yards at practice, and ate all the wrong food. They never went to the gym, never sprinted or ran cross-country, never trained in the off-season. They were, by and large, soft middle-class city boys with an aversion to physical strain. They also had a subliminal aversion—or so it seemed—to the ‘menial’ task of running after a ball and fetching it. These were, after all, men from homes that catered to their every whim. They didn’t even carry their own kit bags.

Modern India has a different mentality. It competes hard with the world. In this, the IPL deserves some credit. That league, which is execrable in so many ways—its vulgarity, its whiff of fixed games, and its disruption of cricket’s global rhythm—has been a godsend to Indian fielding at least. Players from the best fielding nations—Australia, New Zealand, and South Africa—are part of every tawdry squad of Challengers and Royals and Knight Riders, and the Indian cricketers alongside them have had to raise their game or look foolish. Fielding coaches of the highest calibre, such as Jonty Rhodes—arguably the best outfielder in the annals of the game—are on the IPL payroll. Rhodes teaches, a Dronacharya from Durban: Indian fielders learn from him like avid pupils.

Every second of every game is televised around the world, and a shoddy piece of fielding is, as a result, pilloried for days. The rewards of excellence are instant: a sharp stop in the covers, a leaping catch on the boundary line, a quick-thinking run-out, all earn their executors not merely the feverish adulation of commentators and crowds, but crazy paycheques after the game. Fielding is now an integral part of a player’s value at auctions: if you’re a decent batter or bowler, but an iffy fielder, chances are that the franchises will ignore you for a player who can tear across the turf. You trudge or lumber at your own pocket’s peril.

The old excuse for poor Indian fielding was that the country’s grounds were hard, and therefore dangerous to dive on. I never quite bought this: Indian cricketers scarcely dived at Lord’s either, where the ground is as sparkling green as Aishwarya Rai’s eyes. And foreign players always dived in India. The truth is that Indian cricketers of old thought fielding was beneath them. That was the prevailing ethos of the Brahmin— and broadly upper caste—cohort that had a stranglehold on the game. India’s fielding revolution has put an end to all of that namby-pamby and self-destructive elitism. There is glory now in the dive, acclaim in the chase, and a new celebration of physical vigour in a land that is, at long last, getting off its ass and fielding as if to make up for lost time.