Birth of a Salesman

As one of Andy Murray’s business managers and the man behind an ambitious tennis league, Mahesh Bhupathi has his hands full and suitcase always packed 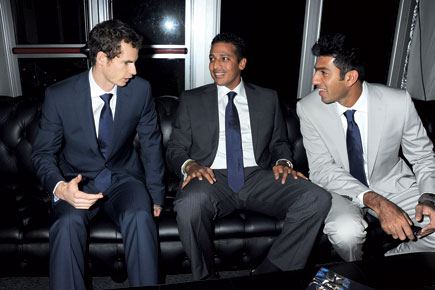 As one of Andy Murray’s business managers and the man behind an ambitious tennis league, Mahesh Bhupathi has his hands full and suitcase always packed


Soon after the US Navy Seals killed Osama bin Laden, authorities released a picture of President Barack Obama and other government bigshots tracking the raid from the Situation Room of the White House. The picture became iconic and also fodder for internet humorists. They photoshopped a range of random characters—from superheroes to a velociraptor—into the picture. To intrigued followers of Indian tennis, Mahesh Bhupathi’s presence in Andy Murray’s box during the Wimbledon final seemed similarly meme-like. Just what was a doubles specialist from India doing in the box of a Scottish player during the singles final?

The answer to that question is Bhupathi, a winner of multiple doubles and mixed doubles Grand Slams, is one of Murray’s chief business managers. He has been so since April. Earlier in 2013, Bhupathi met Murray to ask him if he would play in the International Tennis Premier League (ITPL), Bhupathi’s brainchild, modelled on Lalit Modi’s brainchild, which was modelled on the brainchildren of American sports founders. At that time Murray was looking for a new manager. He was the US Open and Olympic champion. Top agencies were vying for him.

“Things were in transition vis-à-vis his management and he wanted some more time [for the ITPL decision],” Bhupathi says when we meet on a rainy afternoon at the office of his company, Globosport, in Khar, Mumbai. “He asked me for advice on some of the agencies pursuing him. I told him how he should be perceived as a brand. He was already the US Open and Olympic champion. Later that day I was in the airport lounge, waiting to board my flight to India. And he messaged me [asking] if we could talk more. I understood he liked my thought process. I told him if he thought I’d be able to help, then I would send him a presentation as well along with the other agencies wanting to work with him.” And that’s how everything started. “I’m flattered that he thinks I’m the one who will be able to deliver,” Bhupathi says.

Globosport’s office is on Linking Road, one of Mumbai’s popular shopping districts. This is a street where people buy. Bhupathi’s mission is to sell. He has to sell Murray. He has to sell the ITPL, which is slotted for a November-December 2014 opening. He is well aware of this as he sits in a tidy cabin along the right vertical of the large room. Posters of the Gary Player Invitational and Sydney Olympic Games hang on the wall behind Bhupathi. The Olympics image is signed by Cathy Freeman, the Australian Aboriginal runner and 400m Olympic gold medallist. The golf montage is signed by Gary Player and a few other golfers he does not remember.

He likes sports memorabilia and bought the posters at an auction by International Management Group (IMG) during the Chennai Open tennis tournament one year. Bhupathi wears a striped semi-formal shirt with sleeves rolled up, jeans and a chunky leather strapped watch on his left wrist. Away from the fattening gaze of the camera and unflattering lines of baggy tennis clothes, he looks leaner and younger. He has got back from London a day earlier and seems afflicted by a leaky nose. A box of tissues is close at hand. Between answers and sniffles he keeps an eye on his phones, tablet or looks outside the window to his left. As usual, he is unfussy but not over-friendly.

“Surreal” is how Bhupathi describes the day of the Wimbledon final. “The amount of pressure Andy was under translated to all of us. I could barely sleep the previous night. We could see it in [Murray’s] reaction after winning. He kept looking down and shaking his head. The weight of the world was off his shoulders.” Bhupathi and the rest of the Murray team proceeded to the locker room after the match. “We embraced the trophy, something we wanted to do since we were kids. Andy was in a state of disbelief. He was just allowed a few minutes of breathing space. He took a shower and was whisked away for a two-hour media session.”

Murray’s victory is of seismic proportions, especially in terms of money. Last year, Forbes estimated that he earned $12 million from prize money and endorsements (he has four major deals—Rado, Royal Bank of Scotland, Adidas apparel and Head racquets). According to Nigel Currie, director of the London-based sports marketing agency BrandRapport, the Wimbledon title could push Murray’s earnings this year to $75 million. That would take him past the eternally saleable Roger Federer. In 2012, even in his twilight phase, Federer was the game’s highest earning star, and the second highest in all sports after Tiger Woods, pocketing $71 million from wins and endorsements. For Murray, a jump from $12 million to $75 million seems difficult, taking nothing away from his achievements. But he should certainly be able to compete with the $26.9 million and $26 million made last year by Novak Djokovic and Rafael Nadal, respectively. The sheer scale of the sums and the number of possibilities mean a lot of work for Murray’s managers. There also are wont to be changes in the structure of his team. Bhupathi hints that things are in a state of flux but confirms that his position remains as before.

Globosport has managed athletes before this, but nobody of Murray’s stature. Bhupathi so far functioned as just the face of the company, but with a Grand Slam and Olympic champion on board, he will be hands-on, day-to-day. The two speak daily. He also deals with the central figure in Murray’s life, his feisty mother Judy, and brother Jamie. And yes, sometimes there is a canine presence at the meetings. “Andy loves his dogs (Border terriers Maggie May and Rusty). If I’m meeting him at his home in London, they are around,” says Bhupathi. Being Murray’s manager also entails spending more time in London. Bhupathi has a furnished and fully stocked house in Kingston, not far from the All England Club. He does not have to worry about packing every time he flies to London. As a tennis professional, he is used to hectic travel, but being Murray’s manager and the ITPL boss has made his itinerary more intensive. This Wednesday Bhupathi was scheduled to be in Vietnam, on Thursday in Indonesia and later in the week in London. Asked how quickly he runs out of passport pages, Bhupathi says, “I just got a new booklet [of pages]. Luckily they have jumbo booklets now.”

In many ways, Andy Murray is a reflection of his coach—former world No 1 Ivan Lendl. He is successful, fit and hardworking, but lacks flair. Lendl’s greatness is unquestioned. Even a most curmudgeonly rival like John McEnroe acknowledged his work ethic and pioneering training methods. But Lendl was seen as an automaton. He won more major titles than McEnroe or Boris Becker, but did not have their charisma and wasn’t anywhere as popular. It is the same with Murray. In the past 12 months, he has won two Grand Slams and the Olympic gold. This is more than what Djokovic, the world No 1, Federer or Nadal have achieved in the same period. But except in Britain, Murray does not have the popular appeal of the other three. Asked how, as Murray’s manager, he’d overcome this, Bhupathi says, “As of now Andy has won two majors. The more titles he wins, the more his appeal will grow.” But that is then. What about now? “For now, the focus is mainly Britain,” Bhupathi says.

Sponsorship deals that extend beyond Murray’s playing career are Bhupathi’s aim. “I pride myself in being able to bring in an enhanced deal with a certain kind of value,” Bhupathi says. “Andy is the reigning Wimbledon, US Open and Olympic champ. He is the one with the muscle. If people want to be associated with him, they have to be open to creating deals that will show his value way past his playing career.” Murray, on his part, is pumped about taking some more chances with his image or endorsements, which he was not comfortable doing earlier. Evidence of this approach was the intimate, all-access interviews he granted BBC One for a documentary, The Man behind the Racquet, before Wimbledon. Murray broke down while talking about the most traumatic experience of his life, the massacre of 16 children and a teacher at his school in Dunblane, Scotland, by a crazed gunman. The then eight-year-old Murray survived the attack by hiding under a desk. People knew about Dunblane but the documentary further humanised Murray to his audience.

The conversation moves to the ITPL, Bhupathi’s other major project at which Murray is likely to be a major attraction. At first glance, the ITPL seems too ambitious and logistically complex. It is planned over three weeks across six yet-to-be-confirmed Asian and Middle Eastern cities. Elite tennis players rarely give an event three weeks at a stretch, especially one that is uncharted territory and involves so much travel. Besides, the format of the matches—just one set—is seen by many as frivolous. Besides, the popularity of tennis is closely linked to the four majors. The rest of the tournaments have only a niche following. For a sport like this, and in this tough economy, would there be buyers for $12 million franchises? It is not a very big sum in this day and age but not a small one either. Bhupathi touches a button on his tablet and pushes the device across the table. It plays an audio-visual promo for the ITPL. The film has the cream of tennis talking up the tournament. Djokovic, Murray, Nadal and Serena Williams, among others, praise the idea and express excitement. Djokovic even says the idea could be ‘revolutionary’. In addition, Bhupathi has on his side top marketers and former players. Boris Becker is reportedly one of the investors. But Bhupathi still has to sell the franchises.

Sceptical remarks about the event cause Bhupathi’s voice to quiver in indignation. “I wouldn’t be wasting my time flying across Asia like this, if I did not think it was possible,” he snaps in response to a question. “I’ve got what I need, I’ve got the muscle power to sell the league. Once I sell it, things will fall into place. If this was easy it would already have been done. I understand the [sheer size] of the challenge. But I think tennis is crying out for something new. And the new generation of players are excited about it.”

Personal differences prevented Bhupathi’s on-court partnership with Leander Paes from living up to full potential. Hopefully, that will not happen with Team Murray-Bhupathi or the ITPL.