‘One feels that any problem can be solved if you have the right ideas and drive,’ says Swati Bhargava 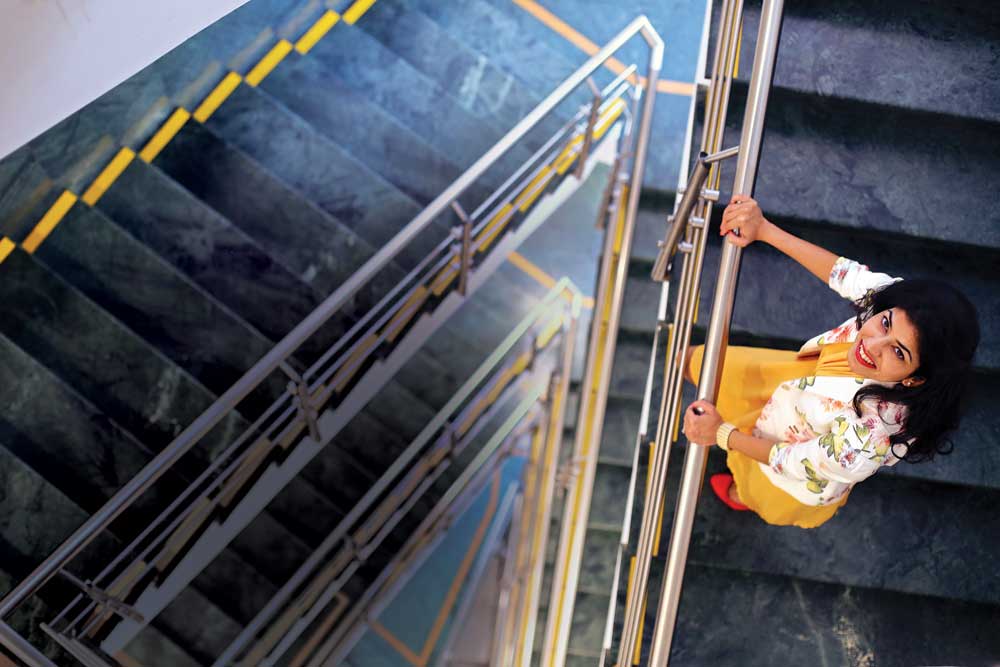 One thing Swati, 34, and Rohan Bhargava, 36, were sure of before starting their own cashback website was this: if buyers knew there was a chance to earn money back, they would be fools to not opt for it. After all, nothing is appreciated more on the internet than a really good chance to save cash. The only problem was, back in 2013 when CashKaro was launched, few people (retailers included) knew or even understood the concept of a ‘cashback’. Coupons and deals they were happy to try out, but cashback was an entirely alien idea that sounded a bit too good to be true to some. Reflecting on that time, Swati says, “Retailers would often be sceptical or not have a process for monitoring and paying affiliates already in place. Buyers, on the other hand, would take some time to believe that they could actually earn money back when they made a transaction. We were sort of the change makers of both the affiliate marketing and cashback business in a way.” And change things they did. Today, over 150,000 registered members on CashKaro earn back an average of Rs 20,000 to Rs 25,000 per year. Till date, CashKaro has paid customers back a total of over Rs 35 crore. “Cashback on the whole is such a sensible and advantageous model. Anyone who has shopped and received cash back, will always use it again. It’s a magnet for anyone who loves a good opportunity to save. The trick is to get them to try it,” adds Swati.

Born in Ambala, Swati met Rohan at London School of Economics, where they were both students. Each went on to pursue a career in finance after graduating—Swati worked in investment banking with Goldman Sachs in London, while Rohan joined Aladdin Capital, a US-based hedge fund. Both of them, however, never lost their drive to eventually become entrepreneurs, which had appealed to them from college itself. After they got married in 2009, they decided it was time to do something of their own. “It was a sort of now-or-never moment for us. We had first heard about the concept of cashback when we went on our honeymoon. We ended up getting close to Rs 25,000 back. And I remember both of us thinking how attractive the idea was from a business point of view,” says Swati. In 2011, both of them quit their respective jobs and started their first company, PouringPounds, a cashback website in the UK. Within a few years they’d tied up with top retailers like M&S, Debenhams, Tesco and Expedia, and were confident that there was a lucrative future ahead for the cashback and loyalty space. So in 2013, with the e-commerce boom taking off in India, Swati and Rohan decided to try their luck here with CashKaro. They sent off a few emails to secure funding. Their goal was $250,000. Within four hours, they’d been promised $750,000 by various investors.

“We tried to manage CashKaro from the UK initially, but it grew harder and harder as we gained traction. While we were able to meet most requirements via the internet for retailers, there’s nothing like face-to-face meetings. And as we started to grow, the number of brands we were associated with, we naturally wanted some of the bigger players on board, like Amazon and Flipkart for instance. We were also looking to raise a second round of funding in India. That’s when we decided it would make more sense to return to India and manage the company from its country of operations,” says Swati. It was perhaps one of the toughest decisions the duo had to make since they started in the business. PouringPounds was stable and established enough for them to run it from India. “We felt CashKaro had a lot of potential and that India was where the opportunities were. Everyone wanted a piece of Indian e-commerce and we were no different. It was still extremely hard to move back to India after 12 years of being away. But in hindsight, it was the right thing to have done,” adds Swati.

Today, Swati and Rohan head a team of 80 who are based in Chennai and Delhi. There are roughly 1,500 retailers who have tied up with CashKaro, including Koovs, Pepperfry, MakeMyTrip, Zoomcar, Shoppers Stop, Jabong, Adidas, Amway, Limeroad, Paytm, Flipkart and Amazon. “We wanted to give buyers a wide range of retail options—from travel to mobile to clothes, something for everybody, all of which can be accessed through one portal,” says Swati. She adds that getting so many brands on board in just 4 years wasn’t easy but the company always had its pitch right. “The first few were a challenge. We were different from your run-of-the-mill coupons and rewards website. We wanted to deal exclusively with cashback offers. What worked for us is that we aimed for growth and change. And businesses recognised that what we were doing could end up being the next big saving scheme. After we had some of the big names on board, the rest were easier to convince.” Some even got convinced over a tweet. “A user had tweeted to us, asking if we had any offers for Amazon and I replying saying that we had cashback schemes for Flipkart but nothing for Amazon.Someone from Amazon happened to read the exchange and it turned out he was the right person to make the affiliate partnership happen,” says Swati, adding that social media is an excellent tool for businesses. “It makes the whole process of business more approachable and democratic. On one hand, we, as a company, can reach out for feedback or to promote special offers and deals. On the other hand, customers can touchbase with us for special requests and complaints. What would have taken ages to reach [snail mail] or taken ages to sort [email] is now instantly delivered and sorted through a tweet or Facebook comment. And for us, with almost all of our operations happening online, there’s nothing more practical or logical than to run customer engagement through social media networks.”

FOR DIGITAL ERAbargain hunters in India, cashback is as good as it gets. The concept initially became big with credit and debit card companies who offered it as money that buyers can earn when they purchase something using the card. The same thing extends to a cashback rewards website like CashKaro where customers can earn money back if they buy goods or services via the website’s affiliate links (it cannot be earned from the website if you buy directly from the retailer without using the affiliate link). This cashback is over and above any cashback offer on your credit card or any ongoing sale by the retailer. “How it works in a financial sense is that they pay us a commission to drive sales to their products. And part of that commission we pass onto the buyer,” explains Swati.

CashKaro currently drives around Rs 100 crore worth of transactions every year. In November 2015, the company raised $3.8 million from Kalaari capital. This was followed with an undisclosed investment by Ratan Tata. “The hardest part of getting Ratan Tata on board was actually setting up an appointment with him. It took us a few months to get that done. When we finally met him over lunch, it didn’t take very long to get him on board. I remember talking to him about our business plans and growth model more than showing him a presentation. It just seemed to work better, to have his full attention. We received his investment within two weeks of meeting him,” says Swati. She adds that as long as you have a business plan that is profitable, scalable and sustainable, funding shouldn’t really be a problem. “You just have to get your basics right.”

The company also expanded into the offline cashback market a few months ago through a tie-up with YesBank. The loyalty programme will give YesBank debit card holders personalised offline and online merchant offers which will earn them cashback. Some of the offline stores on board include Forever21, Chaayos, UrbanClap, Junkyard Café, BigBasket and Croma. Next year, Swati and Rohan plan to launch the CashKaro mobile app, expanding their reach even further and helping their retail partners track payments more easily. All this is part of their goal to become the country’s largest and easiest way to shop by 2020. And if things go well, they wouldn’t say ‘no’ to expanding to other countries in South East Asia like Singapore. “If you look to the West, there are billion dollar precedents for CashKaro. Companies like Ebates in the US and Fanli in China have achieved unprecedented success. Cashback has tremendous scope for growth, that much is clear. We are only 4 years old and there is so much left for us to achieve, including entering into the savings space—we plan to start a price comparison feature soon as well,” says Swati.

But it isn’t just building a billion dollar company that keeps her going, being an entrepreneur in India is also a tremendous lot of fun for her. “There are so many role models in Indian e-commerce, people like Vijay Shekhar Sharma coming up is such a source of inspiration and motivation. One feels that any problem can be solved if you have the right ideas and drive. And the fact that there are a hundred different consumer needs that are still waiting to be fulfilled makes e-commerce incredibly exciting and just plain fun.”