The BrahMos missile can travel at two-and-a-half to three times the speed of sound. 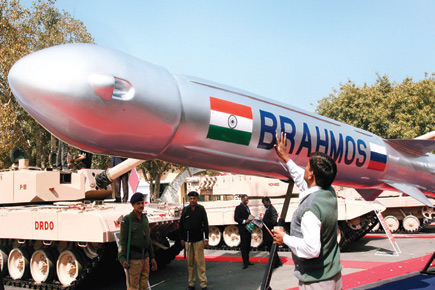 The BrahMos missile can travel at two-and-a-half to three times the speed of sound.


After successfully test-firing the ‘vertical-launch’ version of the 290-km range BrahMos from INS Ranvir last week, India has became the only country in the world to have a ‘manoeuvrable and universal’ supersonic cruise missile. The ‘land attack’ variant of BrahMos has been in use in the Indian Army since 2007. Versions of the missile that can be launched from fighter aircraft and submarines are being prepared on a war footing. The fact that it can be deployed from anywhere is what makes BrahMos ‘manoeuvrable and universal’, and potent and significant.

BrahMos, as the name suggests, is a joint effort of India’s Defence Research and Development Organisation (DRDO) and Russia’s NPO Mashinostroeyenia under the banner BrahMos Aerospace Private Limited. The portmanteau BrahMos is believed to have emerged from Brahmaputra and Moskva, the names of two great rivers in India and Russia respectively. The name may also remind some of the mythical weapon of mass destruction, the Brahmastra.

The BrahMos missile can travel at two-and-a-half to three times the speed of sound. To put things in perspective, that’s about three-and-a-half to four times faster than the original subsonic cruise missiles, the American AGM-84 Harpoon and the BGM-109 Tomahawk.

The ship-launched and land-based versions of BrahMos can carry a 200-kg warhead, while the aircraft-launched variant (BrahMos A) can deliver a 300 kg payload. Though primarily an anti-ship missile, the BrahMos can hold its own in land-to-land combat because it is designed to scout for targets over a 360 degree horizon.

Coming soon: BrahMos Aerospace Private Limited has plans to manufacture at least 2,000 supersonic cruise missiles over the next 10 years. Half of these, they hope, will be exported to other friendly countries preparing for war. What’s more, the BrahMos II, a hypersonic cruise missile that can touch Mach 5.26 is expected to be ready by 2013-14.