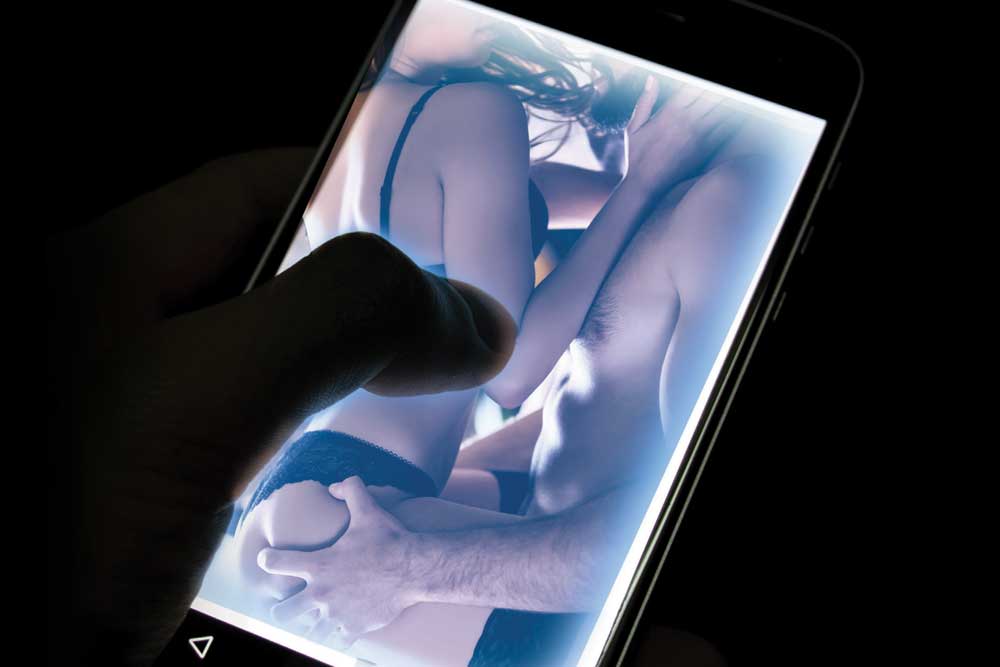 FOR MANY YEARS, LONG BEFORE he installed a computer in his office, Kamlesh Vaswani would walk to nearby cyber cafés in a local market every few days, only to return disappointed. “Youths,” he says, recalling what he saw, “They were wasting themselves.”

Vaswani describes himself as a “small lawyer” in Indore. Having practised law for the last 15 years, he takes what he gets in a small city, he says. These are mostly civil cases of matrimonial and property disputes and bounced cheques. But he has always lived and conducted himself with a strict moral code, he adds.

Reading newspaper articles of sexual violence and rape, however, he arrived at a conclusion. This abundance of pornography was corrupting young minds and fuelling such violence. Things came to a head, he says, when he learnt about the infamous 2012 Delhi gang-rape case. “My wife told me ‘What is the point of being a lawyer and always talking about what is right and wrong when something like this can happen?’ She was correct. It could happen to anyone. I felt helpless. I needed to do something. Someone needed to,” he says.

Vaswani filed a Public Interest Litigation (PIL) asking for a ban on internet pornography. Since then, several people have joined in, either as intervenors or sometimes simply helping him build his case. “I started getting calls from across the country saying they want to support me. Some of them were suffering because their family members were addicted to it. And they wanted to become party to the case, to show just how serious this issue was,” he says.

These include two women, one from Kolkata in her twenties and another from Mumbai in her fifties, both of whom say their husbands are addicted to pornography and it is ruining their marriages. They have filed interventions of their own.

Pornography consumption is changing rapidly in India. It once used to be expensive and difficult to procure. You needed to know a friend who stocked glossies or a video rental store for X-rated movies. You needed to get around myriad obstacles, from social taboos and strict regulation to the difficulties posed by supply restrictions, to get your fix.

“Our minds are like gardens. You can fill it with crap or you can grow the most beautiful flowers” – Atul Gupta, founder of the anti-porn website India Against Pornography

As internet filters go, this is like any other. But what is unusual about it is what happens when one attempts to reach a forbidden website. The chant ‘Har Har Mahadev’, an ode to Shiva, begins to play aloud if the user of the application has registered himself as a Hindu, or the azaan (Islamic call to prayer) if the user has registered himself as Muslim; and if the user is registered as ‘Other’, the user is directed to a collection of inspirational quotes from Mahatma Gandhi’s speeches. “The whole idea is people hear a bhajan or the call of God,” says Mishra. “It will be making them more resolute.”

According to him, the application is meant to be installed by adults as a net nanny, to restrict their children’s ability to view adult content online. But it can also be used by parents themselves to strengthen their own resolve. Since it was made available in November last year, according to Srivastava, it has been downloaded more than 5,000 times.

The website that hosts the application however, according to Mishra, is constantly hacked. For a few days, every month, it has to be put into repair mode. “I think we have made many enemies. Some virus or the other is constantly being sent,” he says.

“People say Varanasi is the spiritual capital. You should just come and see what the boys [here] are watching these days,” Mishra says.

Vaswani’s PIL was accepted in 2013. He began to draft the plea sometime in 2012 as he sat beside his ailing father, not taking up any new cases or even going to his office. He took over a month to complete over 200 pages of the plea. “Nothing can destroy a person, fizzle the mind, evaporate the future, eliminate potential or destroy society more efficiently than pornography,” says Vaswani.

THE CASE, HE SAYS, HAS CONSUMED him. He has made over 45 appearances so far, travelling from Indore to Delhi by train as many as 10 days before every hearing at the Supreme Court to prepare his arguments. He would sometimes stay with friends and sometimes with relatives in Delhi. Vaswani perhaps felt this case, his first PIL plea, would help his career. But in Indore, he says, work dried up. “They say, ‘He is always travelling to Delhi. He has no time to look at local cases’,” Vaswani says. He claims to now be in debt, and having had to sell his car and scooter to repay some of it. Two years ago, hoping to make a fresh start, he moved to Mumbai, where he lives in a rented apartment with a friend. The case however is still going on. The last hearing happened sometime last year.

Interestingly, it isn’t just parents or moral guardians who seem to worry about the ready availability of online smut. In some cases, the abundance of internet pornography seems to be overwhelming those dependent on it. And the remedy, if at all, seems to be located at the same place as the source of all pornographic evils—the internet. In the last few years, there have been several takers (or ‘Fapstronauts’) of the NoFap lifestyle. This is a large Reddit- based forum that has been growing over the years, where the community helps each member ‘fapstain’ or ‘reboot’ (in other words, abstain from pornography and masturbation). Members of this group offer support and advice to those keen to ‘take control over their lives’. And, according to them, ‘fapstaining’ promises such benefits as less social anxiety and ‘brain fog’, increased libido, more energy, and an increased motivation to go out and interact with the rest of the world.

Unsurprisingly, there seem to be many Indians who are now part of this group. The vast majority of them are of course anonymous, but some of them even put up video blogs of how they are faring with their ‘fapstinence’.

Internet pornography, he says, took over his life a few years ago after he graduated from college. “It wasn’t such a problem when I was in school and college. But later, when I began living alone, I became completely dependent on it,” he says. When he first heard of NoFap last year, he says, he thought it was bullshit. But he still gave it a go. “Till last year, I hardly used to go outside, I had major self-esteem issues, and I just used to feel very demotivated. Now, even though once in a while I relapse, I feel so much better,” he says. “People have even begun to say I look much better.”