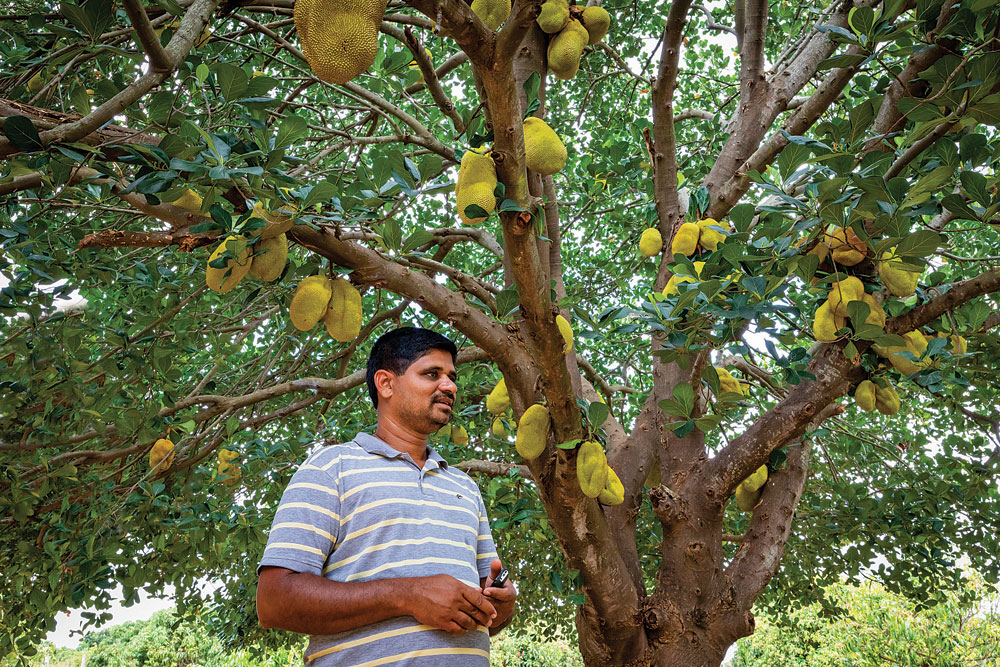 SEEGENAHALLI SIDDAPPA Paramesha is a mango farmer. The unchallenged emperor amidst hundreds of midget- like alphonso trees in his orchard is the broad-canopied ‘Siddu’, a jackfruit tree, now nearing 40. Around 15 metres tall, Siddu stands on a little bump on the eastern perimeter of his farm secured with barbed wire, with a reverential pit of a five-metre radius around, as if it were a holy Shiva linga. Paramesha, about as old as Siddu, with a prosperous potbelly, a thick mop of spiky hair and clad in a polo-neck tee, shorts and flip-flops is not quite Lord Emsworth. But Siddu is no less valuable than the Empress of Blandings Castle. At stake is not bragging rights at the village agricultural show, but crores of rupees in potential revenue.

The tree in Paramesha’s farm in Chelur village, 100 km from Bengaluru, is a rare and perhaps the lone surviving specimen of its variety. It is coveted for its sweeter, more succulent copper-red bulbs with lycopene levels to match tomato and packed with dietary fibre, potassium, iron and zinc. Its smaller fruit’s weighing only 2.5- 3 kg makes it retail-friendly compared to traditional varieties that go up to 40 kg.

The scramble in the West for plant- based ‘superfoods’ has already sent jackfruit’s stock soaring. Over the last decade, several international studies have declared the fruit rich in protein, minerals and micronutrients but low on carbohydrates compared to rice and wheat, and a potent combatant against malnutrition and climate change. Also, in the modern marketplace for fruits, small is beautiful, and red is the colour of profit.

In 2017, under the Protection of Plant Varieties and Farmers’ Rights Act, enacted to grant intellectual property rights to plant breeders, researchers and farmers who have developed any new or old varieties, India declared Paramesha the custodian of this variety of jackfruit and allowed him to name it after his 75-year-old father SK Siddappa who planted a seed in his farm from a bulb he ate at a nearby village. This allows him to sell Siddu saplings and earn a royalty on all subsequent sales.

Paramesha sells Siddu saplings from his nursery at Rs 250 a pop—almost double the price for the regular variety. The Indian Council for Agricultural Research (ICAR), the apex government body for scientific innovations in farming, has struck a three-year deal with him that will ensure 70 per cent of sales it makes on such saplings going to Paramesha.

“It’s my golden tree. It has secured the future of my family,” he beams. In the last three years, he’s made nearly Rs 10 lakh selling Siddu grafts. This year alone he’s booked orders for 20,000 saplings; the demand is almost double that. He’d be happy to oblige, if only there were more than one full-grown Siddu.

Just the previous day, Paramesha returned from Delhi, his first visit and that too by plane, to meet ICAR bigwigs. The red-oxide-floored front room of his spotlessly clean two-storey house now has a custom-built wall-shelf to accommodate certificates, trophies and pictures taken with seers and politicians. A giant photo album as heavy as a jackfruit, bordered fittingly in golden on each page, offers further evidence of his and Siddu’s celebrity.

The onset of monsoon is the best time to plant jackfruit. And his phone hasn’t stopped buzzing, leading up to the rainy season. Every few minutes he fobs off fellow farmers ringing up to ask if they could drop in and pick up a few dozen saplings since they ‘accidentally’ happened to be passing through Tumkur, a town 20 km from Chelur. “Call me after September” is his standard response. Some persistent callers make him irritable. “I’m not manufacturing plastic bottles. It’s a plant, for God’s sake. It can’t grow on demand,” he yells. The operation is complex. Siddu’s shoots have to be skillfully grafted on to another jackfruit stalk so that the offspring from the marriage retains only the qualities of the prized parent. The young saplings planted in grow bags then spend a month in what Paramesha calls the “ICU”—a greenhouse the size of a tennis court where plants are protected from pests and sun.

The only way Paramesha can keep up with demand is by cutting young shoots from the mother tree. The nearly 40,000 shoots plucked out in the past few years, he suspects, has hit Siddu’s health. From an average of 500 fruits, the yield is now down to 350.

The fruits themselves are so prized that even his two children don’t get to taste them often. Many are sent to fairs around the country. VIPs—police commissioners, politicians, actors—grab the rest. It’s hard to estimate the price of the fruit as none are sold. Paramesha thinks it could fetch above Rs 1,000 each.

The bigger threat for Siddu, Paramesha fears, is jealous local farmers. His family is an easy object of envy. He’s building a small shed next to the tree where a family member could keep vigil and a solar-powered electric fence. Four high-definition cameras around the tree will beam pictures live onto his smartphone to save him the trouble of conducting a fruit-count twice a day.

Siddu’s story is reminiscent of the story of the 50-year-old tamarind tree at the heart of celebrated Tamil writer Sundara Ramaswamy’s 1966 debut novel Oru Puliyamarathin Kathai, hailed as a classic. Set in Nagercoil, a town in Tamil Nadu bordering Kerala, it is a story of human ambition, greed and rivalry that the tamarind tree in the centre of town witnessed and ended up a victim of. In a foreword for the golden jubilee edition of the novel, renowned translator N Kalyan Raman wrote: ‘While the tamarind tree was always benign, stirring the breeze, providing shade and yielding copious fruit every summer, the world of humans around was not, making the tree vulnerable to the destructive whims and machinations of the humankind. Oru Puliamarathin Kathai is quite simply the story of the tree living and dying.’

“It takes five years for a jackfruit tree to start yielding. In a couple of years, there will be thousands of mature Siddus,” says G Karunakaran, agricultural scientist

IF PARAMESHA IS Siddu’s custodian, G Karunakaran, an agricultural scientist and the head of ICAR’s Central Horticultural Experimental Station (CHES) in Hirehalli village 65 km from Bengaluru, its untiring impresario. The 44-year-old specialist in exotic fruits took up the project of identifying, preserving and developing rare and ‘elite’ varieties of jackfruit. In this major jackfruit-growing region, Karunakaran had heard many stories of farmers growing rare, red varieties but had failed to track down one. “Market agents refused to help me because they felt their secret would be out,” says Karunakaran, a thin, bespectacled man from Tiruvannamalai in north Tamil Nadu. Middlemen even spread rumours the government would take over the trees that produced exotic varieties. In 2015, to smoke the rare fruits out, Karunakaran organised a fair with cash rewards for farmers who put them on display. Siddu was discovered at one such fair. CHES experts scored it 9.9 on 10 on nearly 20 parameters, including taste, flavour, marketability and nutritive content.

In India, its homeland, jackfruit has an image problem. In the north where raw jackfruit is used as vegetable for cooking and pickling, the fruit itself is despised on account of what north Indians consider its odour that reminds them of rotting onions, smelly armpits or even excreta. In the south, it has an exalted status. In ancient Tamil literature, it is part of the divine troika with mango and banana; its wood is used to make the mridangam; Kerala, which accounts for almost half of India’s output, has even declared it the ‘state fruit’. A recent Guardian piece describing it as ‘spectacularly ugly, smelly, unfarmed and unharvested pest-plant’ evoked indignation, primarily on south Indian social media. Such protestations notwithstanding, the sad reality is that jackfruit lacks the love it deserves. Almost half of India’s jackfruit produce ends up in trash. Several factors, other than olfactory, conspire: carrying one home isn’t as easy as picking up a few kilos of mangoes; handling the sticky latex-laden fruit is messy and requires considerable skill (my 10-year-old daughter described our home, after my recent efforts to carve open a mid- sized jackfruit, as a crime scene); a fruit can yield as many as 100 bulbs and even after a family of four has had its fill, you invariably have to invite neighbours to share the fruits of your labour (if they are north Indian, like mine, the offer could be construed indecent). The absence of a large enough national market prevents investment in its processing and packaging.

“That’s why Siddu could be a game changer,” says Karunakaran, who describes spreading the gospel of Jack his life’s mission. “It can be easily carried home and cut open by a housewife. It is sweeter, more attractive and yet less pungent than a regular jackfruit. In a small family, each member can have five pods and not worry about storing vast quantities,” he adds.

Could the new-found craze for Siddu end up killing Paramesha’s mother tree? “See, it takes five years for a jackfruit tree to start yielding. In a couple of years, there will be thousands of mature Siddus. Then, people will want something better. I’m already working on it. Until then, let Paramesha enjoy the limelight.”

Honey, I Shrunk My World