The Gender Quotient of Politics 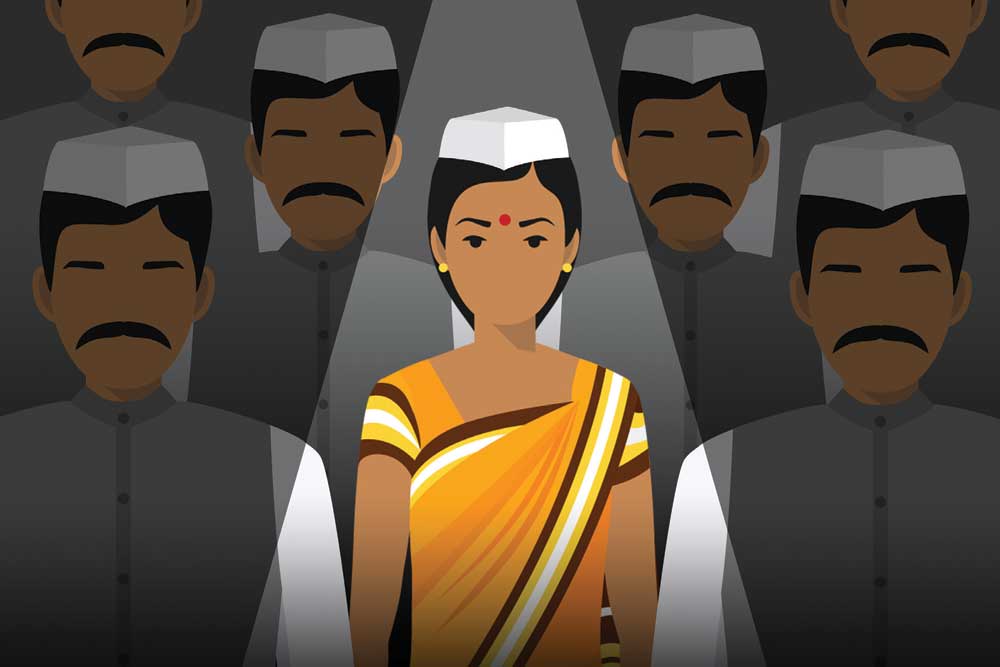 WHEN RENUKA CHOWDHURY became Minister for Health in 1998 she had to deal with the AIDS epidemic and talk widely about condom use. It was something her male bureaucrats would find terribly distressing, using all manner of euphemisms, from prophylactics to protection to family planning. Finally fed up with their walking on eggshells, she put up a giant map behind her chair, entirely made by Hindustan Latex of condoms in pink, white and green. “Visitors, mostly men, would choke mid-sentence,” she says.

Being a woman in politics is never easy, whether you are a four-time MP or a newbie like Shazia Ilmi. Ilmi who went from journalism to Aam Aadmi Party in 2014 and has been with the BJP since 2015 says: “As a woman politician you are always under scrutiny, from how much lipstick you’re wearing to how loudly you’re laughing. There are extra variables if you’re a Muslim in a right-wing party.”

Indeed women cannot be what they cannot see, and the representation of women in political spaces has been rising but at a glacial rate, from 22 in the first Lok Sabha to 66 in the sixteenth Lok Sabha, which is 5 per cent to 12.2 per cent—even though women’s voting has risen to 65.63 per cent compared to 67.09 per cent for men, in the 2014 General Election. As for state Assemblies, the representation of women is even lower at 9 per cent. The Women’s Representation Bill, first introduced 23 years ago and proposing 33 per cent reservation in the Lok Sabha and state Assemblies, has lapsed.

Yet, some parties have tried to correct the gender imbalance even without a change in the law. Forty-one per cent of the Trinamool Congress’ candidates for the upcoming General Election are women. Says Derek O’Brien, Trinanool Congress leader in the Rajya Sabha, “We have 50 per cent reservation for women at the panchayat level. The Swashta Sathi Smart Card is issued only in the name of the women of the family. Apart from the members of the family, the woman’s parents get the benefits too.” Almost every enlightened state government has a scheme targeted at women, whether it is cycles for female students from Nitish Kumar’s government or the UN-winning Kanyashree scheme with a budget of Rs 7,000 crore for 6 million girls in West Bengal. Even the Biju Janata Dal has reserved 33 per cent seats in the Assembly and Lok Sabha elections for women, a progressive step even if it is framed in patriarchal terms. Calling it a bold decision and quite removed from the traditional politician’s caution in not giving women tickets for fear of losing, BJD MP Pinaki Misra says, “Clearly Naveen Patnaik is so confident of his track record or performance and his enduring charisma that he had taken this unprecedented step.” He points to it being part of tradition—Biju Patnaik ensured one-third reservation in panchayats for women in 1991, which his son raised to 50 per cent. “Women are the bedrock of BJD support,” he adds.

Indeed, there is a clear distinction between how women are viewed as voters and as potential candidates. While parties are going all out to woo women voters, women candidates are not sought after. Women usually find two kinds of representation in the political space—either as single, such as Mayawati and Mamata Banerjee, or sanskari and sindoorwali like Sushma Swaraj and Smriti Irani. Both are essentially relational power, where women are seen as wives, daughters, mothers, sisters and daughters-in-law of political families, the extended family metaphor, a point made by American historian Gail Minault, compared to the Western sexualised politician which requires a Hillary Clinton to streamline her appearance as much as it needed a Margaret Thatcher to take voice lessons to fit in with the upper-class boys’ club of British politics. Whether in the East or the West, “if they can’t find a box to fit you in, they start disliking you,” says Ilmi.

It’s a problem Manisha Ahlawat can relate to. Now part of Political Shakti, a movement to lobby for more women in legislatures started by Bengaluru-based Tara Krishnaswami. Ahlawat is the daughter of a former MLA from Sardana, Meerut. Despite being from a prominent Jat family, her father, Chandra Vir Singh, fought and won elections on a BSP ticket, a party representing Dalits and headed by a woman. “This is what needs to happen. More women, especially from Dalit and other minority communities, must take up active roles in politics,” she says, adding that she feels she can contribute more to politics right now by promoting others than becoming part of the beti-bahu brigade.

It’s something Vimlesh Sharma appreciates. She contested sarpanch elections from Nithari in Noida, Uttar Pradesh, only after her children had grown up, in 2010, and won. Seven years later when her term was over, she filed her nomination as an independent candidate for the Uttar Pradesh Assembly, but was among the 17 whose papers were rejected after scrutiny. She hasn’t given up though and intends to achieve more for her constituency to be fully deserving of the people’s support.

She believes that politics can be about meritocracy, especially if the playing field is level. She spent Rs 1.8 lakh on her sarpanch elections but knows of those who have spent in multiples of that. Contesting for Assembly elections costs nothing less than Rs 2 crore, she says, which is why women need the support of both the party and the people. Otherwise the bottom-up pipeline of leaders will not function at full capacity. Women will contest as candidates in panchayats and urban councils as well as students’ unions, but will not be able to break through. At the top, there is a glass ceiling, which even when it is breached in official appointments, say former President Pratibha Patil, Minister for External Affairs Sushma Swaraj or Defence Minister Nirmala Sitharaman, they are more symbols of power rather than power itself. This is women’s power in its most sanitised version, which doesn’t deal with patriarchy, rather accepts it as a virtue, says sociologist Maitrayee Chaudhuri.

Even if women are active in student politics in colleges and universities, it doesn’t always translate into a career in politics or even equal visibility for when it does. A contest in Begusarai between CPI’s Kanhaiya Kumar and BJP’s Giriraj Kishore gets more eyeballs than the launch of a political party in Kashmir (Jammu and Kashmir People’s Movement) by Kumar’s one-time colleague, former vice-president of the JNU Students’ Union Shehla Rashid and former IAS officer Shah Faesal. The greater the variety of women politicians, the easier it will be for more women to join, whatever their shape, their clothes, the length of their hair, or the religion or profession of their significant other.

Journalist and author of The Marigold Story: Indira Gandhi & Others, Kumkum Chadha, thinks it is easier to be a woman politician now, not just because they are in greater numbers but also because they are no longer just window-dressing down the line. “Yes, it is tough to get in but once they prove their worth, they stay because their work has backed them,” she notes.

Sometimes though they can stay too long, like eight-time MP and outgoing Speaker Sumitra Mahajan.