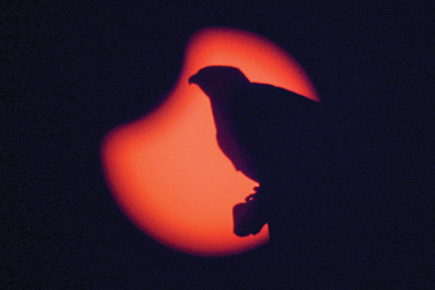 Bangalore-based Eclipsewatch had enlisted volunteers across India to record changes among indicator species such as dogs, crows and lizards during the solar eclipse.


There were almost 100 citizen scientists, observers all. On 15 January 2010, rather than staring at the darkening sun as the millennium’s ‘longest solar eclipse’ briefly turned day into dusk, they were on watch  for curious incidents among insects, birds and animals. Dramatically changing light conditions during eclipses are said to affect animals. And Eclipsewatch, an initiative of the National Centre for Biological Sciences (NCBS) in Bangalore,  had enlisted volunteers across India to record changes among indicator species such as dogs, crows and lizards on www.eclipsewatch.in.

Suhel Quader, faculty member of NCBS, who’s led citizen science studies on migrant birds, says of this eclipse study, “It was generally a very quiet day with very little bird activity. The most striking thing I noticed was a swarm of dragonflies over our lawns just before maximum coverage at 1:23 pm. Dragonflies are normally out over the (NCBS) lawns in the early mornings and late evenings. This behaviour might’ve been because their insect prey were emerging.” Similar observations were made in Chennai, where swifts and swallows were flying around during the eclipse (like dragonflies, they eat flying insects). Storks returned to their roosting trees.  In other locations crows and sparrows banded together and called, as they do before roosting.

The NCBS team is collating the data that’s  come streaming in from places that witnessed diverse magnitudes of dark such as Delhi and south Mizoram (where there was  a total solar eclipse). Some data arrived online,the rest came in by email, Twitter and Facebook. Quader admits, “The results are not going to solve war or crime, but it was a chance to study this phenomenon and get people to watch the natural world.” Nasa says an eclipse of such a long annular duration will not be exceeded for a 1,000 years till 3043.