×
Image of the Week

For Chimps, Sex for Food Is Okay 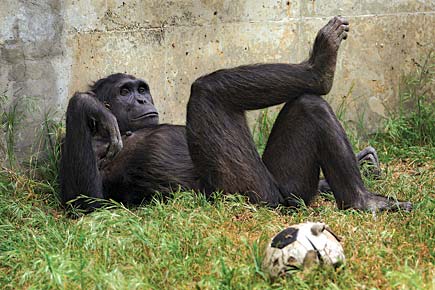 BUYING SEX or sex for a favour may be considered immoral in human society, but for chimpanzees, the exchange may be a fair one.


BUYING SEX or sex for a favour may be considered immoral in human society, but for chimpanzees, the exchange may be a fair one.

German researchers found that female chimpanzees mate more frequently with males who often share meat with them. “Our results strongly suggest that wild chimpanzees exchange meat for sex, and do so on a long-term basis,” Cristina Gomes of the Max Planck Institute for Evolutionary Anthropology in Leipzig, Germany, said in a statement. Writing in the Public Library of Science journal, Gomes and colleague Christophe Boesch said they watched chimps living in the Tai National Park in Ivory Coast.

“These findings are bound to have an impact on our current knowledge about relationships between men and women. Similar studies will determine if the direct nutritional benefits that women receive from hunters in human hunter-gatherer societies could also be driving the relationship between reproductive success and good hunting skills,” Gomes said.