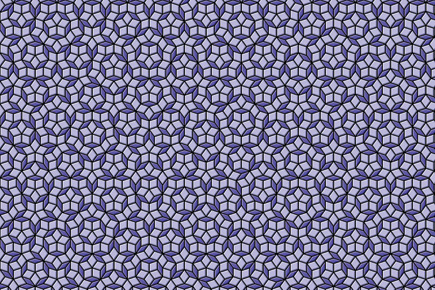 
A tiled floor is common enough an object in daily life. Largely, we tend to use rectangular or square tiles for this purpose, but it is possible to use triangular or hexagonal tiles as well. These tilings have a simple property termed periodicity. If you think of the floor extending without end in both directions, then it is possible to shift the tiling in such a fashion that it remains unchanged. This is straightforward for square tiling, which can be shifted by a row or column. Hexagonal tiling, on the other hand, needs to be shifted by two rows or columns to retain its shape. It is, however, not possible to use octagonal tiles on their own to periodically tile a floor, but if tiles of two shapes, octagons and squares, are used, then it becomes possible to produce periodic tiling. It turns out there are floor tilings that are not periodic; that is, each portion of the floor is covered by a repeated pattern but the pattern cannot be shifted so that it remains unchanged. Such tilings are called aperiodic. In 1974, the mathematical physicist Roger Penrose was able to produce such aperiodic tiling using tiles of just two irregular shapes. It is possible to ask the same question in three-dimensions, and it turns out that while crystals are objects that are the equivalent of periodic tiling of a plane, there are objects called quasicrystals that correspond to aperiodic tiling.

Dan Shechtman, who first identified such a quasicrystal in 1984, was greeted with ridicule by his fellow scientists, with Linus Pauling stating that “there is no such thing as a quasi-crystals, only quasi-scientists”. It turns out Pauling was the one who was wrong, and these once believed to be impossible objects are now used in common household items such as non-stick cooking implements. This was the discovery honoured by the Nobel Prize in Chemistry this year.