Did a Waning Monsoon Hit Harappa?

A new study suggests that the climate turned more arid some 4,000 years ago 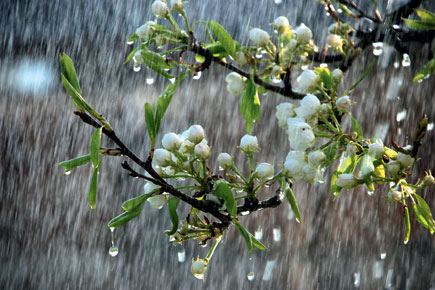 A new study suggests that the climate turned more arid some 4,000 years ago


A new study,of variations in the Indian monsoon over 10,000 years, by researchers at the Woods Hole Oceanographic Institution (WHOI) is shedding new light on the end of the Harappan civilisation. According to a WHOI release: ‘The geological record and archaeological evidence tell a story of the possible fate of India’s earliest civilisations. Cultural changes occurred across the Indian Subcontinent as the climate became more arid after about 4,000 years. In the already dry Indus basin, the urban Harappan civilisation failed to adapt to even harsher conditions and slowly collapsed. But aridity favoured an increase in sophistication in central and south India where tropical forest decreased in extent and people began to settle and [undertake] more agriculture. Human resourcefulness proved again crucial in the rapid proliferation of rain-collecting water tanks across the Indian peninsula, just as the long series of droughts settled in over the last 1,700 years.’

That conclusion follows from the study that has found that ‘a fundamental shift in the Indian monsoon has occurred over the last few millennia, from a steady humid monsoon that favoured lush vegetation to extended periods of drought.’ The study focuses on the core monsoon zone (CMZ)—a region in the central part of India where precipitation is a very sensitive indicator of the monsoon throughout the peninsula.

“If you know what’s happening there, you know more or less what’s happening in the rest of India,” says Camilo Ponton, lead author of the study, recently published in Geophysical Research Letters titled ‘Holocene Aridification of India’. The study makes use of a sediment core collected by the National Gas Hydrate Programme of India in 2006. Extracted from a ‘sweet spot’ in the Bay of Bengal where the Godavari River drains the central Indian peninsula and over which monsoon winds carry most precipitation, the core has provided the basis for a 10,000-year reconstruction of climate in the Indian peninsula’s CMZ.

“We are fortunate to have this core from close to the river mouth, where it accumulates sediment very fast,” says Ponton. “Every centimetre of sediment contains 10 to 20 years’ worth of information. So it gives us the advantage of high temporal resolution to address problems.”