The President is Gone

In this book, six Indian candidates have a shot at shaking W’s hand. Who will win? 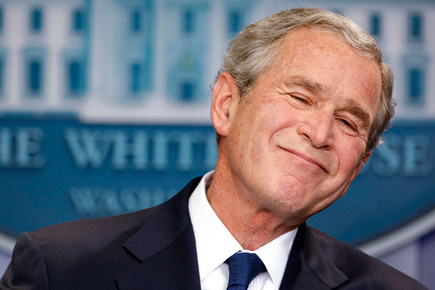 In this book, six Indian candidates have a shot at shaking Dubya’s hand. Who will win?


Did we notice former American President George W Bush come and slip out of India recently without a single hullabaloo? If this visit was a whimper, then his 2006 sojourn could easily be termed the biggest humdinger to befall the nation since Pussy Cat left town. Then, he carried with him the titular responsibility of the most powerful man on the earth. And predictably, when he came, protests ensued, effigies were burnt and slogans shouted, while the jovial Texas Cowboy demeanour worked its charm and left.

The President is Coming is not exactly a chronicler of all that. It’s actually a rib-tickler that smartly packages the chaos that could have gone on behind the US embassy walls during Bush’s visit in 2006. The idea, in the novel, is for a pair of self-proclaimed spin doctors to select an Indian youth from a group of six shortlisted freshly-broiled loonies to shake hands with the president. Predictably again, chaos ensues.

Anuvab Pal has a deft touch with humour, which becomes infectious as the story progresses. To add to it is Bush’s Texas intellect and the quirkiness of the six candidates who have a shot at shaking hands with the president. The six include a stock market guru who shares his name with a famous cricketer; an heiress-cum-CEO of a lipstick company; an Americanised BPO trainer from Noida; a Microsoft programmer desperately in search of a partner; a crudely sexist social activist; and a Bengali with literary aspirations.

These six, somehow, exemplify the silly banalities of today’s Indian youth. Their proclivity to fall for a prize as trivial as a handshake, with a person who may have very little influence on your daily life, at the cost of destroying each other, is foolish enough. The satire behind their foolishness, is Pal’s cutting social remark.

The novel is the third avatar following a play and movie with the same name. The play premiered in 2007 at Prithvi Theatre and the movie opened earlier this year and starred Shernaz Patel, Konkona Sen Sharma, and others. Anuvab Pal, the writer of all three, cuts hard into the snobbish whims of India’s youth with his satire. It probably comes with his distinction of contributing for American sitcoms Frasier and Law & Order.  Pal’s real achievement is that in one jolt, he has produced a comedy with simultaneous appeal here and in the West.