From malicious mendicants to rats that rob dead bodies, Hindi horror comics are the perfect ghastly mix of the old and the new 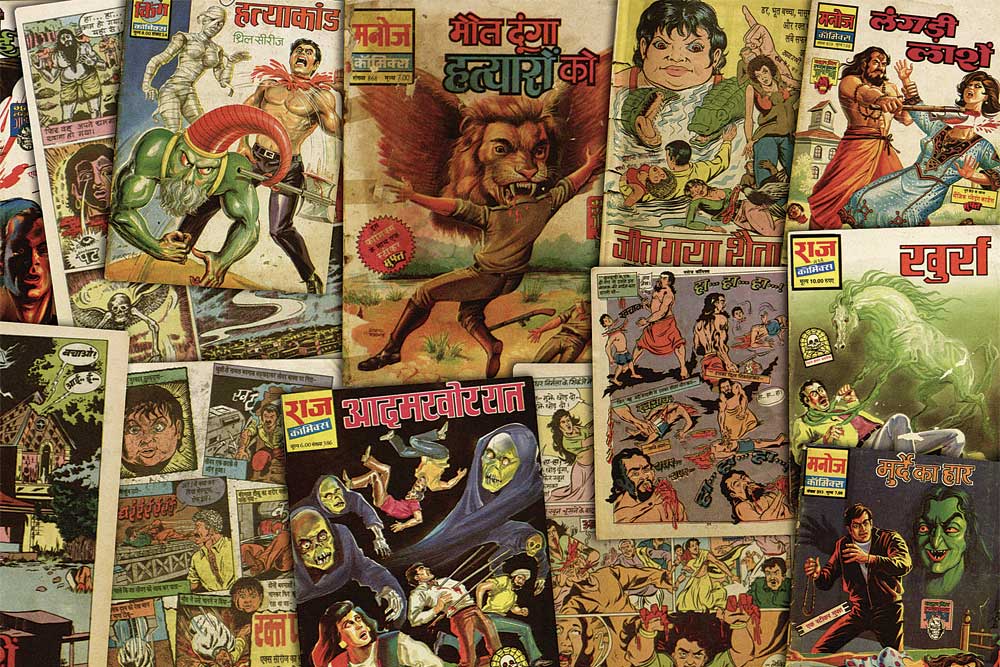 A MUSEUM CURATOR’S daughter is tricked into helping crooks steal artefacts. When she realises her folly and raises the alarm, they murder her, mummify her and dump her body inside a sarcophagus. Soon, her ghost possesses the artefacts the thieves stole and kills all of them. Once the revenge is complete, she manages to communicate to her father the location of her body. This straightforward, almost naïve, story is a staple of Hindi horror comics from the 80s and 90s. These comics were primarily targeted towards the young, male audience. The stories were always accessible, the demons and monsters employed all the existing popular horror tropes to deliver the scare. However, it would be unfair to call them formulaic and predictable. Structurally, they resembled folklore. There was a certain rawness in the style; the art was uncomplicated, appealing. Yet within this familiar framework they introduced a wide variety of evil: some forms of evil were based on Indian mythology, some borrowed from the West, and some were completely unique.

In the last decade, the horror genre in India has undergone major changes. We want our ghosts to be layered and conscious socio-politically, and fear needs to go beyond horror tropes and find new avenues. In our search for new frontiers of horror, Hindi horror comics demand closer attention.

In the case of horror, one must never underestimate the significance of established tropes. Gothic mansions, creaking doors, cobwebs, deep forests, lake sides, desolate cottages, graveyards, abandoned churches and ruins are all used in creating the right mood. Plenty of horror stories take place in the distant past, and in many cases, the borders between fantasy stories and horror are dissolved. There are numerous comics laden with raakshashas, pishaachas, pretaatmas and daanavs. These comics are the most generic and straightforward. Frequently, they are about a young prince or king who has to fight these creatures to save his kingdom. These are tales of old curses, enchanted forests and evil mendicants summoning the dead in macabre backgrounds. The art matches our folkloric imagination beautifully. For example, raakshashas are always huge, darker- skinned, dressed grotesquely, and have gigantic and protruding canines; they match our concept of raw savagery, and, of course, feed into deep-seated racism.

Stories that take place in current times tend to use ghosts, vampires, witches and restless spirits to weave their tales. The most common motif in the modern set-up is revenge. It revolves around the miscarriage of justice and the need of spirits to avenge their deaths. Another variation on this theme is spirits communicating their backstory to the living and coaxing them to act on their behalf. These two plots play out in various settings. I first saw it in the story titled Hathyaakaand (Murder Story) that used a museum as a backdrop, but we also notice a great array in the settings. Schools, libraries, hospitals, offices, railway stations, housing societies—many locations have been manipulated to tell a spooky saga.

One thing that has struck me about Hindi comics is the sheer visceral violence and gore. The gore is further magnified by unique onomatopoeia. For example, when a monster is eating someone, the sound is written as ‘kachkach’ or ‘chappad chappad’. In a case of knifing, it is ‘khacch’; when someone is shot to death it is ‘dhaain-dhaain’ or ‘thaain-thaain’.

The most common motif in the modern set-up is revenge. It revolves around the miscarriage of justice and the need of spirits to avenge their deaths. They coax the living to act on their behalf

The art is extremely graphic as well. For example, in a book called Langdi Laashein (Lame Corpses), there is an evil tantrik who kills children and eats their organs as part of his black magic ritual. There is an entire page showing the tantrik killing children, mutilating their bodies and feasting on their organs. Beheading is commonplace in these comics. There are stories that also show graphic torture scenes, like chopping off fingers, extracting kidneys, halving people, and so on. For an adult, these illustrations are not particularly disturbing, but for a child or an adolescent, they would be fairly unnerving. Unlike in the US, India has never targeted and banned horror comics. Perhaps they have never been considered a threat to the moral fabric of society at large. Also, comics have always been considered flippant and treated as a guilty pleasure. Just as with horror, most Hindi comics are viewed with disdain. Some horror comics contain disclaimers, like ‘Don’t read this at night’ or ‘Do not read this book alone’. My guess is these warnings are simply a different kind of publicity.

It is fairly obvious that the target audience of these comics are men. Naturally, I pay close attention to depictions of women, particularly evil women. Surprisingly, the female characters are similar to their male counterparts. Witches are not different from demons; their behaviour is largely flat and generic. Female ghosts looking for justice behave in the same way as men. There is also little difference between male and female victims. The art often sexualises female bodies, focusing particularly on large breasts. Beyond that, there is little gender bias. Treating women like a regular male character is an unusual trait. American horror comics often portray women characters as frivolous, often stupid—the gender bias is rather palpable. Since Hindi comics don’t exhibit that trend it certainly deserves a special mention.

Evil children are not uncommon in horror stories. In fact, some of the most terrifying horror films feature children. Omen, The Bad Seed, Children of the Corn and Village of the Damned are a few films that do not depict children as victims but as the very personification of evil. Hindi comics are no exception. Raj Comics’ X Series features an evil child named Sunny and a man named Naresh Mehta who wants to kill him. There are six books in the series, and one of them is titled Maasoom Shaitan (Innocent Demon), acknowledging the moral conundrum of the reader. Sunny looks like an adorable child yet his actions are shockingly gory. He mutilates his victims with acid, crushes them under heavy vehicles and uses crows to blind them. With every book, his actions become more violent. Sunny is not unique but he makes a compelling villain.

The female characters are similar to their male counterparts. Witches are not different from demons. Female ghosts looking for justice behave like males

Another interesting feature of Hindi comics is the use of inanimate objects for evil. In Hathyaakaand it is possessed artefacts. In Murdon ka Haar (Necklace of the Dead), a stolen diamond necklace begins to kill anyone who wears it. The diamonds turn into anthropomorphic beings and start mutilating anyone who touches the necklace. Interestingly, there is no explanation for these possessed diamonds. All we are told is that they belonged to a woman who died owing to natural causes. One may dismiss this as lazy writing; however, it would be foolish to dismiss the potential of an open-ended story like this. As a matter of fact, there is no shortage of stories with enormous potential in these comics.

There are many tales of possessed animals who behave violently, but that is a common feature in horror narratives. The most unique manipulation of animals appears in a story titled Baarah Ghante (Twelve Hours) where the watchman of a graveyard trains rats to rob dead bodies. There is an echo of Edgar Allan Poe in this story as you see the rats taking over his life and mutating into something much more insidious.

Personally, I find stories about animals avenging their deaths to be some of the most poignant that I have read. In Khurraa (Hooves), a champion racehorse and his jockey are tortured and murdered by their rivals. Soon, the apparition of a horseman begins to haunt the village and exact his revenge. There is a truly tragic moment in the story when the ghosts of the horse and the jockey hug each other and cry over the life they could have had if they had been allowed to live. In Maut Doongaa Hathyaaron Ko (I Will Avenge My Killing), a poacher murders a forest ranger and goes on a rampage, killing animals. The ghosts of the animals and the ranger come together and kill all poachers. Again, there are some moving parts in the story when the ghost of the ranger regrets not being able to save the animals.

There is no shortage of blonde European doctors and scientists in Hindi comics. Escaping the colonial hangover is not easy, and these characters capture the Indian image of the smart Westerner. Unfortunately, comic books are not subtle about racism. Africa is always portrayed as the land of the uncivilised, Native Americans are heavily exoticised, and Asians are often depicted as crafty and crooked. Racial stereotypes provide fodder for creating grotesque creatures and lampooning non-Western cultures. For example, in Aadamkhor Raat (Maneater’s Night) there is a signboard in English that reads, ‘Denger (sic) Uncultured Tribe area’. This kind of blatant racism is fairly normal in these comics.

When it comes to horror comics, this is just the tip of the iceberg. There are numerous horror series that have been published by leading publishing houses like Raj, Diamond, Manoj and Tulsi, to name a few. Diamond Comics’ Brown Dracula series was extremely popular. Manoj had the Bhoot Pret series and Raj had the Thrill, Horror, Suspense series. It is critical to realise that horror comics have been much closer to folk horror than cinema. They have catered to the public at large and have not been limited to an urban audience. Having said that, for the longest time, horror cinema was also not considered mainstream and was treated as low-budget and campy. As the horror genre reinvents itself, a basic understanding of horror comics has become relevant. They are not just a treasure trove for an untapped source of horror tales but also a great resource to understand evolving narrative techniques, historical imagination, violence and racism.