Anant Pai, the adoptive ‘Uncle’ of generations of Indian children, has turned 80. Pity we can’t find an adequate gift for the man who gave us so much joy? 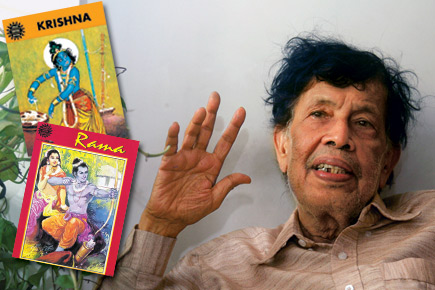 Anant Pai, the adoptive ‘Uncle’ of generations of Indian kids, is now 80. Pity we can’t find an adequate gift for the man who gave us so much joy?


In a certain time, at a certain stage in our lives, our fables were called Amar Chitra Katha. For a generation that grew up without Google, when ice cream was always vanilla, the week’s highlight was the Sunday movie and every ‘bright’ child had to have ‘good GK’, the buck stopped at Amar Chitra Katha. With simple drawings, basic text fonts and flat colours, the pages of Amar Chitra Katha and its sister publication Tinkle, offered entertainment, information and everything in between. There’s a story that when Mikhail Gorbachev, then USSR President, came to India in the late 1980s, his staff fact-checked his speech with a man the Soviet Consulate in Bombay believed had the best grasp on all information Indian: the creator of Amar Chitra Katha, Anant Pai.

On 17 September, Uncle Pai, as he’s known to anyone above and below a particular age, turned 80. Uncle Pai, the adoptive relative, teacher, and a man who, improbably, had no children of his own. A steadfast traditionalist who still believes that, “If your roots in your culture are deep and strong then you will flourish.” Today the organisation he set up under the patronage of publishers India Book House (IBH) prefers to be called by its acronym ACK Media, a conglomerate that has branched out into a multimedia content provider for everything from Cartoon Network to iPhone. It is a different world from the one Uncle Pai remembers. Today even the Pais watch a bit of TV.

Uncle Pai and his wife Lalita live in a tiny apartment in Worli, on the edge of South Mumbai. Their flat is basic, crowded with awards, books, and the detritus of a life spent in academics. “I still work but nothing like before. I don’t keep regular hours or travel,” he says. His voice is still clear and his memory vivid, but his body is bent and age has disfigured his long expressive hands, once the tools of his trade. Those days when he travelled across the country canvassing educators to teach through comics are gone; the last time kids thronged to see him was almost a decade ago.

Uncle Pai is now the ageing mascot of young ACK Media, which was set up in 2007 after CEO Samir Patil, a former McKinsey consultant, bought all the Amar Chitra Katha titles. Pai, who didn’t have copyright over his creations, moved to the new outfit as Editor Emeritus and Chief Storyteller. But it’s unlikely he even wants to tell contemporary stories with the sort of pointless humour that sells SpongeBob SquarePants. “I have a policy, ask no evil, say no evil,” he says mysteriously about today’s TV content.

Uncle Pai was trained to be an engineer, but he only spent three months working as one. “One month plus two months’ notice.” In the 1960s, when he was working for The Times of India, Uncle Pai was already an armchair traveller. In his cartoon strip, he wrote about shipwrecks, the Statue of Liberty and Eiffel Tower; in a series called Around the World with Kunjupillai, he sent a man to Lebanon and Syria. “I went through geography books, called consulates, embassies, and asked them for information and pictures on their cities,” he says. He got the idea for Amar Chitra Katha after watching a quiz in which contestants couldn’t remember Lord Ram’s mother’s name but knew the gods of Olympus. The first title, Krishna, was published in 1970, but the idea didn’t take off immediately. KT Mirchandani and IBH lost over Rs 50,000 in the first two years. “But he was patient, and from the fourth year, we flourished,” says Pai. Till date, Amar Chitra Katha and its other titles have sold more than 90 million copies, been translated into 38 languages, and become the focus of various international studies.

On his birthday, Uncle Pai was in the office with his wife, who shares a birthday with him, to cut a cake and have lunch with his ACK family. What would be a good birthday gift for a man who reacquainted millions of Indian children with their culture? He doesn’t have a Padma Shree. Aishwarya Rai does.