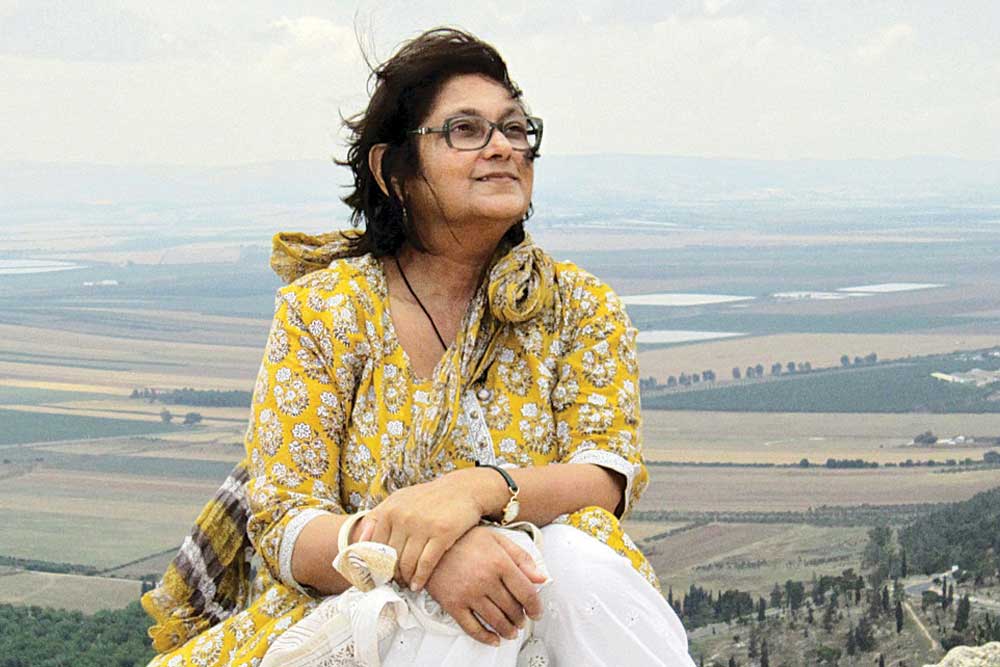 THINGS TO LEAVE Behind is the final book in Namita Gokhale’s Himalayan trilogy that includes The Book of Shadows (1999) and A Himalayan Love Story (2002).

A work of historical fiction, the novel traces the journey of a Kumaoni Brahmin family from 1840 to 1912. It begins at the time when the Kumaon hills passed out of the hands of the Nepali monarch into ‘the embrace of the British Raj’.

Gokhale draws out a deep yet subtle narrative, tied intrinsically into the seasons of history, the grip and later the loosening hold of the Raj in India.

The legend of the Nainee lake (Nainital) as the place where the eyes of Goddess Sati fell upon the earth presides over the story. Incidents from history, often narrated with tongue-in-cheek humour, fill the early part of the book. Most memorable is the telling of how the British adventurer ‘Pilgrim’ Baron had a small rowing boat carried out to the Nainee lake. His friends and he set the boat on her sacred waters. Baron then got the landowner Nursingh Thokdar to sign away his ancestral claim on the lake and the land around it by taking him out for a boat ride and threatening (gently) to leave him in the middle of it. Thokdar signed off his heritage in a shakily- written note in elaborate Hindustani on a piece of paper that was handed to him right there in the boat.

From among the retellings from history, a pure, cold story stream bubbles up midway through part one. A revolutionary called Badri Dutt Uprety is to be hanged. Taking final leave of his family, Badri Dutt advises his young niece Tilotamma: ‘Remember this, my little Tillu. Never be afraid, and do what you want. Not what you like, but what you want.’ Thus begins the story of Tilotamma, the book’s key character—a headstrong unconventional loner who breaks almost every rule in the Kumaoni -Brahmin rulebook.

Alongside in 1857, the young widow of an army officer, Mary Jane Nestor, ends up destitute during one of the battles of the Mutiny. She makes her way to Nainital and marries a missionary called Henry Boden. They start a leprosarium in Almora. One of her twin daughters, Rosemary, emerges as another of the novel’s protagonists. Another story stream rises as delicate, dutiful Rosemary falls in love with Jayesh Pant, the nephew of Almora’s leading physician. Here begins a story of lifelong unspoken love between Jayesh and Rosemary, for Jayesh is quickly married off to Tilotamma’s only daughter, Deoki. He leaves for Bombay where he is seduced on arrival by a woman who almost represents the city of voracious traders.

Jayesh returns to Almora and confesses. His family renounces him and he converts to Christianity.

Jayesh goes to live with Rosemary at Eden Ashram in Sat Tal. Their passion remains stifled by his reserve and her moral rectitude. Tilotamma brings and deposits Deoki with her husband. And here the final part of the story plays out between the three protagonists, Jayesh, Rosemary and Deoki and the visiting artist, William Dempster. Dempster creates paintings that express the protagonists’ unarticulated sensuality.

In Gokhale’s world, each character plays his or her destiny out against the Kumaon’s socio-political and natural landscape, battling what is imposed, struggling to realise his or her heart’s desire. Most of the characters wind up in the poignant, numbing hold of dreams relinquished. Only Tilotamma and her daughter Deoki emerge with their souls intact.

Deoki’s twin daughters, Tara and Sara, collectively raised by Tilotamma, Jayesh, Rosemary and Deoki bring a modicum of peace to this world. The reader is left with the sense of a traditional society fast disappearing, yet eternal. Tilotamma, in the end, watches fog embracing the lake and sky, making the landscape seem as timeless as the legend of Sati’s eyes that dropped to the earth at this very spot. ‘Don’t look back, Tillie,’ Tilotamma tells herself. ‘Look forward, to things yet to come. Never return to what has been left behind.’

But even after the last page has been turned, the reader remains wrapped in the rhythms of that long gone time.