As Indian graphic novels evolve, they are taking some unfamiliar, unIndian turns, if still to tell familiar stories 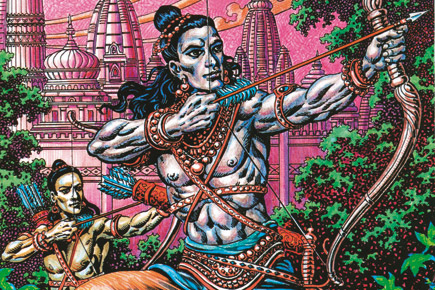 As Indian graphic novels evolve, they are taking some unfamiliar, unIndian turns, if still to tell familiar stories


The graphic novel adaptation of Ashok K Banker’s Ramayana series, The Prince of Ayodhya, is illustrated by Enrique Alcatena—a collaboration that is nothing less than serendipitous. The illustrator is an Argentine comic book artist whose distinctly deep, dark South American jungles and Ayahuasca vision-like colours transport you to a land and story that’s familiar but not quite. In the tradition of American comic book publishing giants such as DC and Marvel (which Alcatena has worked for), this book is a true page-turner with excellent pacing and dynamic frames.

It’s obvious, though, that the illustrator has never been to India, and I suspect a lot of his visual references came of Google; the architectural depictions of the palaces are faintly Buddhist, Parvati dresses like a Balinese dancer, and panthers curl around tree trunks in the forest. But it works in a weirdly wonderful way. It is indeed serendipitous that Banker found an illustrator who is not culturally and visually familiar with the Rama of Amar Chitra Katha or Ramanand Sagar’s iconic TV series, let alone idols in temples. This Rama is virile and powerful in unexpected ways. The art is lush and detailed, and you can well imagine it took three years to do. I think it’s limiting to call it an ‘Indian Graphic Novel’. The author may well be an Indian, but the illustrator’s Argentine sensibility and American work experience have come together in a book that is truly global.

In his introduction to the book, Banker writes about his search for illustrators that took him many places, including the ‘Baroda-based NID’. The fact is, NID (National Institute of Design) is in Ahmedabad, and if Banker had ventured there he may have encountered Pratheek Thomas and Rajiv Eipe, creators of the newest graphic novel on the block, Hush.

Reading Hush is like drinking a shot of bootlegged whisky in Gujarat. It requires some silence, a certain dedication towards the task, and it sure hits you. Hard. It’s more novella than novel, a story told without words or colour, stripped down to monochrome and told in a scant 17 pages. There is the use of clever little techniques from noir filmmaking, the requisite tone of urban hopelessness, and beautiful chiaroscuro. Because there are so few pages, you tend to notice more—like how the reflection of a face in a broken mirror conveys a sense of being trapped and shattered, how flashbacks are set on black and the present narrative on white, and other details that I shall leave for you to spy and decipher. And much as I enjoyed it, I couldn’t shake off the sense that maybe this should be a short animation film. The book even feels like an NID project proposal, complete with a storyboard, character design sheets, script excerpts, properly rendered pull-out posters and alternative cover designs.

If I were on their  diploma jury, I would remind the boys that books are not film storyboards, they are another medium,  best played with differently. However, they would get an A+ for effort, skill and the willingness to get their hands dirty and contribute something unique to Indian bookshelves.