This could have been a Mills & Boon novel, but for its sado-masochistic twist. So what is it about this cliché-ridden book that is driving women in hordes to read it? 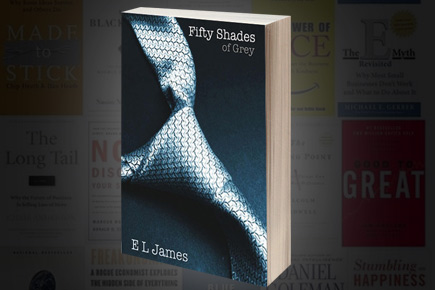 This could have been a Mills & Boon novel, but for its sado-masochistic twist. So what is it about this cliché-ridden book that is driving women in hordes to read it?


There is nothing original about EL James’ Fifty Shades of Grey. The plot, the characters and the style are reminiscent of every other book that has been written in the romance genre. The protagonist, Anastasia Steele, is an unwittingly beautiful, surprisingly witty girl who’s a wee bit over 20. And she’s head-over-heels in love with the gorgeous, unremittingly charming and somewhat mysterious piano-playing, helicopter-flying, oh-so-perfect 29-year-old billionaire Christian Grey. Sounds like the plot of every third Mills & Boon, except, there is an unexpected twist: Steele is a virgin, and while Grey breaks her in, it’s his first time too—not at intercourse, but at vanilla sex. And there’s also the question of a contract.

The aloof Mr Grey finds himself increasingly besotted by Ana, who first encounters him when she goes to his office to interview him for her school magazine. Unlike most men, though, he doesn’t want to just ‘do’ her and get on with it, even though she’d like that very much and makes it abundantly clear. Grey wants more. He would like Ana to be his ‘subservient’. He wants to be her ‘dom’, and, in his defence, makes this evidently clear to her from the beginning… well, a little after their first kiss in an elevator (cliché much?).

The next 450 pages are an exercise in negotiation. Ana doesn’t need an epiphany to realise she doesn’t have the subservient instinct; she rolls her eyes much too often, prefers to say what’s on her mind, and doesn’t take kindly to being spanked. Unfortunately, no one makes her wetter than the experienced Mr Grey, so she attempts to have her cake and eat it too. She signs the preliminary non-disclosure agreement and says she’ll keep an open mind about the more elaborately outlined contract Grey has had drawn up, which requires her to submit to his every whim for an initial three-month period and demands that she pleases him at all times, not because he wants to be pleased but because she wants to see him pleased. Their conflict is most evident when Grey introduces Ana to his large playroom full of BDSM paraphernalia. Ana refers to it as the ‘Red Room of Pain’, Grey would rather she saw it as the ‘Red Room of Pleasure’.

What follows is page after page of their sexual exploits as Grey decides to initiate Ana into a world of subservience, carefully masterminding each orgasm he intends to give her, drawing her further into his dark world of desire, pain and passion. Ana finds reasons to delay signing the contract. Finally, she tells Grey she wants more, she wants to ‘make love’ and not just fuck. The book then dwells on his attempt to give her more; it’s the taming of the shrew, except we’re not entirely sure who’s the shrew and who’s the one doing the taming. We are as intrigued by Mr ‘Fifty Shades’ who delights in spanking reluctant Ana’s bottoms, but who refuses to let her touch his torso, and is yet as besotted by Ana as she is by him.

Fifty Shades of Grey is no literary masterpiece, and it doesn’t go around pretending to be one. The first in the Fifty Shades trilogy (yes, there’s more where that came from), the book has been pitted as Twilight for adults, and as you read it, you know exactly why. Grey’s sexual appetite makes him seem mysterious and vampirish, while Ana’s disposition and personality has undertones of Bella-ness.

Unsurprisingly, Fifty Shades of Grey is rumoured to have grown out of a multi-part series of fan fiction called ‘Masters of the Universe’ based on Stephenie Meyer’s Twilight novels. James (a pseudonym for Erika Leonard, a London-based television executive) published these online between 2009 and 2011 on various websites. She then won a contract with the Australian-based Writer’s Coffee shop to publish her work, which was apparently rewritten to remove the obvious references to Twilight and which then assumed its own narrative style.

The book became an instant hit, and claimed the number one position on The New York Times e-book fiction bestseller list in the week ending 3 March, and was number three on the Amazon bestseller list. On 10 March, James was given a seven-figure sum by Vintage Books to re-release the trilogy with a 750,000-copy print run.

It’s not hard to see why. The writing is frequently fluffy. In fact, if this reviewer had an orgasm for each time Ana says ‘Oh My’ and ‘Holy Shit’ and speaks about her ‘inner goddess’ and ‘subconscious’, this reviewer wouldn’t need to read erotica ever again for kinky kicks. There’s no insight on the intimacy of sex, and the text frequently reads like a pile of clichés. So what is it about this book that’s unwinding women’s panties? The lack of imagination in the book’s plot is remedied by the sporadic inventiveness of some of the sex scenes. When Grey the sadist realises Ana’s limited threshold for pain, he decides to ease her into bondage. The most interesting sequence is when he blindfolds her, straps her to the bed, and forces her to listen to some transcendent classical music, which he knows she loves, over headphones. The acoustics in his playroom are designed to let him listen in to what she’s listening. As she’s lost in the flood of music, he alternates between feather glove and hard-edged whip and introduces her to the delicacy of pleasure-edged pain. He rounds it off by pleasuring her entirely, ‘riding’ her until she is sated.

Grey’s character, although bossy and dominating and alpha-male like, is almost consistently sensitive, caring and dreamy. His only weakness is his proclivity towards all things sado-masochistic. Grey isn’t abusive; in fact, he cautions Ana at all times to make use of her ‘safe words’, egging her to communicate with him so he knows what’s on her mind. Ana is increasingly seduced by Grey’s charms, but she doesn’t give in to him blindly. Perhaps the best part of the book is their email exchange where Ana tries to get Grey to ease up on some of the clauses in the contract that require her to be more submissive than she is willing to be. He replies to her with the dictionary meaning of ‘submissive’. She replies with a definition, too, and the operative word for her is ‘compromise’. Until the end, we’re certain, as readers, that Ana will get her way and we’re surprised by the twist at the end. And then again, we’re not. We know this sado-masochistic treat must spill over into two more books. As much as we’re repulsed by the references to Grey’s dick as Ana’s own ‘Christian-Grey flavoured popsicle’ and her many ‘Oh My’s’, we realise we’ll probably indulge in this trilogy. For the book’s success is most certainly not in the strength of its language, or its far-from-radical perspective of women’s sexuality. It is pure fantasy, written by a woman and certain to appeal to other women. After all, Grey is only a kinkier, steamier, more sexualised version of the inimitable Mister Darcy.

A Quick Peep Inside the Book

“It’s called a flogger.” Christian’s voice is quiet and soft.

A flogger… hmm. I think I’m in shock. My subconscious has emigrated or been struck dumb or simply keeled over and expired. I am numb. I can observe and absorb but not articulate my feelings about all this, because I’m in shock. What is the appropriate response to finding out a potential lover is a complete freaky sadist or masochist? Fear … yes… that seems to be my overriding feeling. I recognize it now. But weirdly not of him—I don’t think he’d hurt me, well, not without my consent. So many questions cloud my mind. Why? How? When? How often? Who? I walk toward the bed and run my hands down one of the intricately carved posts. The post is very sturdy, the craftsmanship outstanding.

“Do you do this to people or do they do it to you?”

His mouth quirks up, either amused or relieved.

“People?” He blinks a couple of times as he considers his answer. “I do this to women who want me to.”

“If you have willing volunteers, why am I here?”

“Because I want to do this with you, very much.”

I wander to the far corner of the room and pat the waist high padded bench and run my fingers over the leather. He likes to hurt women. The thought depresses me.

“I’m a Dominant.” His eyes are scorching gray, intense.

“What does that mean?” I whisper.

“It means I want you to willingly surrender yourself to me, in all things.”

I frown at him as I try to assimilate this idea.

“To please me.” He whispers as he cocks his head to one side, and I see a ghost of a smile.

Please him! He wants me to please him! I think my mouth drops open. Please Christian Grey. And I realize, in that moment, that yes, that is exactly what I want to do. I want him to be damned delighted with me. It’s a revelation.

“In very simple terms, I want you to please me,” he says softly. His voice is hypnotic.

“How do I do that?” My mouth is dry, and I wish I had more wine. Okay, I understand the pleasing bit, but I am puzzled by the soft-boudoir Elizabethan-torture setup. Do I want to know the answer?

“I have rules, and I want you to comply with them. They are for your benefit and for my pleasure. If you follow these rules to my satisfaction, I shall reward you. If you don’t, I shall punish you, and you will learn,” he whispers. I glance at the rack of canes as he says this.

“And where does all this fit in?” I wave my hand in the general direction of the room.

“It’s all part of the incentive package. Both reward and punishment.”

“So you will get your kicks by exerting your will over me.”

“It’s about gaining your trust and your respect, so you’ll let me exert my will over you. I will gain a great deal of pleasure, joy even, in your submission. The more you submit, the greater my joy—it’s a very simple equation.”

He shrugs and looks almost apologetic.

— (Extracted from Fifty Shades of Grey)