A Hindi Film on Paper 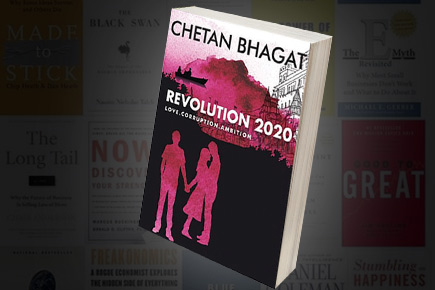 
A colleague who went to interview Chetan Bhagat recently was told that magazines like the one you hold in your hand turned their noses at his writing but he didn’t worry about it. He had developed a three-inch thick skin. It must be confessed that your reviewer’s nose was firmly turned when he set out to read Revolution 2020. The blame for this must fall partly on the blurb, which went like this—‘Once upon a time, in small-town India, there lived two intelligent boys. One wanted to use his intelligence to make money. One wanted to use his intelligence to start a revolution. The problem was, they both loved the same girl…’ If it’s any consolation to Mr Bhagat, then this is a nose that turns even more at what passes for literary fiction in this country. It is therefore, you could say, perpetually turned. Once started on Revolution 2020, the nose went unturning for about the first 100 pages. It then went into neutral territory for a while, and towards the end it turned again and remained there.

Reading Revolution 2020 is like watching a Hindi movie of the 70s. There’s even a father who’s always coughing, making dinner for his son and attending to debtors knocking on the door. It’s set in Varanasi and this is the story in outline: Gopal is your hero, Aarti the heroine, and Raghav, a character who makes special appearances, the third leg of the tripod. Since this is Mr Bhagat, the love triangle is set in the backdrop of IIT aspiration. Gopal and Aarti are inseparable since childhood. Gopal loves her, she is ambivalent in her reciprocation. Raghav gets into IIT. Gopal has a does-not-matter-rank. He goes to Kota for another attempt. Aarti and Raghav get together. Gopal’s second attempt is equally futile. His father dies. He is a loser par excellence to himself. He is jealous of Raghav. Gopal then starts an engineering college. He becomes rich. Raghav is an idealist. He becomes a journalist. He gets sacked. He starts a newssheet called Revolution 2020, gets busy with it, ignores Aarti, who switches her love to Gopal. In the end, there is a sacrifice. As with any endurable Bollywood movie, there is a masala panache to it. While your reviewer winced often reading the book, it didn’t really bore him. There is some storytelling happening.

The agony of Gopal, the loser burning with jealousy, is actually done well. The story spirals downwards towards the latter half with holes the size of Mumbai’s potholes. For example, Gopal’s got land that is in dispute and all it takes is one conversation with an acquaintance for his private engineering college to get going. An MLA semi-adopts him, finances him, gets him the land and finally almost turns it all over to him. Such absurdities happen with recurring frequency. Intricate detailing or a believable plot is not among Mr Bhagat’s many strengths. The nose didn’t even have to think to begin turning.

Should you, dear reader, then pay Rs 140 for the pleasure of watching a Hindi movie on paper? That, alas, happens to be an irrelevant question. Only a few days ago, a Facebook status of a friend popped up on the Wall of your reviewer. It said: ‘one day I was just browsing thru flipkart and purchased a pre order latest book of Chetan Bhagat, called Revolution 2020. Just finished reading. A mind blowing book as always. Chetan Bhagat at his best. Great Story and even great end. Keep it coming Chetan!’ Your reviewer disagrees, but that too was a review, and who is to say who is right?