A Bible on Hinduism

Hinduism as we know it was a British creation. DN Jha reveals a few home truths 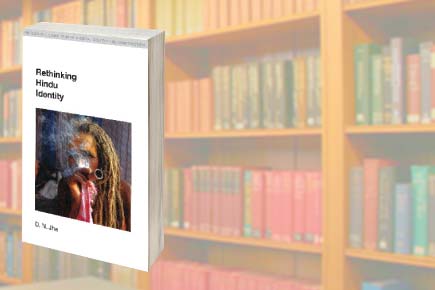 Hinduism as we know it was a British creation. DN Jha reveals a few home truths, including that Hinduism is the youngest of religions


DN Jha was professor of history at Delhi University and the general president of the Indian History Congress in 2005-06. In 2002, his book, The Myth of the Holy Cow, raised a storm by suggesting that the consumption of beef was common in ancient India, but the facts he marshalled left no room for rebuttal. Now, in his new book, he questions the very idea of Hinduism.

Q When you say Hinduism is the youngest of religions, do you mean this literally?

A There may be a few sects younger than Hinduism, but it is certainly one of the youngest religions. The word Hindu in the sense of a religion does not exist in Sanskrit texts prior to the 19th century. Given this fact, how do we accept the view that Hinduism is an eternal religion? It cannot be treated as eternal or sanatana—the Sanskrit term for eternal. There is no basis for this in history. Interestingly, even the expression Sanatan Dharma was first used in the Buddhist texts Suttanipata and Dhammapada. The former defines it as truth being an undying word and the latter as love alone being an antidote to hatred and enmities. Subsequently, the Brahminical texts used it in different senses and in various texts and contexts.

Hinduism itself is a colonial construct: when the British commenced the Census, they faced the problem of classifying amorphous groups of castes and communities, and people of different religious denominations. The Census authorities used the term Hindu to bring all non-Muslims under one category. But the line between Hindus and others was so unclear that the term ‘Hindu Mohammedans’ was used in some Census records as late as 1911.

The 19th century social reformers also accepted this term, which is why it became so popular. The first Indian to do so was Rammohan Roy. In the early 20th century, the University of Calcutta started two departments of history: one for the study of ancient Indian history and the other for promoting the study of Islamic history. Though, in practice, the former glorified the ‘Hindu’ period of Indian history and the latter denigrated Muslim rule. RC Majumdar and Jadunath Sarkar—no doubt great historians of modern times—were the products of the academic milieu in which celebration of Hindu kings and condemnation of Muslim rulers went hand in hand. This milieu has unfortunately continued in most Indian universities.

Q Are then ideas such as the innate tolerance of Hinduism recent constructs as well?

A Several stereotypes came into being with the creation of Hinduism. The first was that it was eternal, the second that it was monolithic, a view being pushed too far by the Sangh Parivar today. Symbols like Rama are being used to give homogeneity to the idea of Hinduism. Then there is the stereotype of Hinduism as a very tolerant religion as opposed to Islam. The Muslims were and are seen as people who converted Indians forcibly and raped their women. The idea of Hindu tolerance was surprisingly used by a wide range of leaders of the freedom struggle, from Tilak to Nehru and Gandhi. Exaggerated notions of Hindu inclusiveness only strengthened its exclusivist nature.

It is, however, difficult to ignore the mélange of evidence of the tension between different religions such as Shaivism and Vaishnavism, classified under Hinduism, as well as with Jainism and Buddhism. As early as second century BC, Patanjali spoke of Brahmins and Buddhists as being eternal enemies, like the snake and the mongoose. His statement was indeed prophetic, for Brahmins did contribute in a big way to the decline of Buddhism in India.

Also, contrary to the stereotyping of Hinduism as a non-proselytising religion, there is much evidence of conversion. The Vratyastoma, a ritual to convert non-Aryans to the Aryan way of life, was quite common in the Vedic period. It continued in subsequent times and was used to bring tribal people into the Brahmanical social order. The term dikhsa, literally, initiation of an individual into any religion, is used in numerous texts. The word paravartana, which stands for change in religion, occurs in the late Dharmashastra texts. An 11th century text from Kashmir lays down detailed procedures for converting people to Shaivism. The practice of shuddhi started by the Arya Samaj in the 19th century meant reconversion, which, in reality, is no different from conversion. These days, the VHP and its affiliates are working overtime to bring tribal people and others to the Hindu fold and call it ghar vapasi, which is a euphemism for religious conversion. How far is it then justified to ignore all this to project Hinduism as a non-proselytising religion?

Q Yet you do assert that a composite culture did emerge over the centuries. How does this differ from the idea of Hinduism?

A India has been a land of dissent and differences right from the time when we begin to get written sources. In the Rig Veda itself, you find evidence of Brahmins being ridiculed as croaking frogs. In cosmogonic hymns chanted while offering oblation to the gods, the refrain is ‘for whom then do we make this oblation?’

But there is also much that is part of a shared tradition. Take the case of Satyapir, who has an appeal for both Hindus and Muslims and blurs the line of distinction between them. There are more than 700 manuscripts that contain narratives of Satyapir both as an incarnation of Vishnu and as a ‘Muslim moral exemplar’. In north India, we have Kabir, Nanak, Ramdev, Mallinath and so on, who defy all religious boundaries. In Punjab, you have Bulle Shah, who sang in ecstasy that he was neither an Arab nor a man from Lahore, neither Hindu nor Turk. Communities like Meos, Khatath Muslims and Makwana Rajputs observe both Hindu and Muslim customs and defy rigid religious boundaries.

All this and much more symbolises India’s composite culture. Take the case of the Ramayana, which is so important for the VHP. Many versions of it exist, some say 300, some 1,000, but whatever the number, it is very large. These versions differ from Valmiki’s Ramayana both in thematic emphasis and character portrayals. In the Buddhist version, Ram and Sita were brother and sister, in a Jain version Lakshman had 16,000 wives, while his elder brother Ram had half that number. In the Santhal version, Sita is said to be having illicit relations with both Lakshman and Ravana. In Indonesia, one notices a conspicuous Islamic influence on the Ram story. Many communities and groups of people have identified themselves with the Ramayana tradition in their own ways. How then can Hindus claim a monopoly over this tradition?

The invention of Hinduism is opposed to our idea of a composite culture of which we are justly proud. Emphasis on the Hindu-Muslim dichotomy has led to many problems in our country. If we could do away with the term Hindu, much of these problems would be solved.