Dayalan was ten when he joined the LTTE’s suicide attack squad. His story, and of other underage soldiers like him, serves us a grim reminder of the depths the human condition can descend to. Even in this day 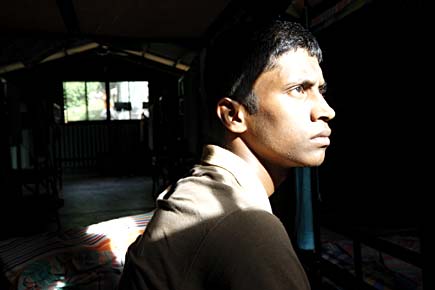 The bullets have stopped flying, but the real difficulty for LTTE’s former child soldiers will be to lead a normal life


The leader hugged him. With his military fatigues weighing on him, Dayalan could feel the metal buckle of the leader’s belt press against his waist. The leader looked at him for a moment, his hands still resting on Dayalan’s shoulders, and then he said, “Go and destroy the target.” Almost five months later, Dayalan saw the images of Prabhakaran on TV, his eyes open, as if to convey another message to Dayalan.

But the dead don’t speak, and Dayalan knew it only too well; at 17, he had seen enough death. Now the leader himself was dead, a clean bullet hole above his forehead. He wore the same uniform. As for the belt, Dayalan couldn’t see it. But the feel of that buckle returned to him, that haunting symbol of authority against his waist.

It was on 22 December 2008 that soldiers of the Sri Lankan Army pounced on Dayalan in Kilinochchi, located in the northern bastion of the Liberation Tigers of Tamil Eelam (LTTE). He was on a mission with a clear brief: he was to mingle with the crowd and get them accustomed to seeing him around. And then he would have received specific instructions—a message to identify his target for him. He would have eased his way towards his target, his finger near a button on his belly bulge. The finger would have pressed the button. And then, there would be a void.

More than slipping towards his target, Dayalan was keen to slip into this void. The message was still hours away, or maybe a few minutes, he couldn’t tell, when Dayalan found himself surrounded by the army soldiers. He could have bitten his cyanide capsule; like the rest of his militant cadres, he carried one slung around his neck. It was another way to the same void. But when the time finally came, he had that one moment of hesitation. Dayalan’s courage failed him. As he was taken prisoner, he knew reclaiming that courage would be of no help.

At the age of ten, Dayalan became a ‘Black Tiger’—a member, that is, of the LTTE’s suicide squad. Within the ranks, it’s an honour, they’re told. These are the brave ones, the truly ferocious who have mounted numerous deadly attacks against the LTTE’s enemies, including a former Indian prime minister.

On a hill overlooking rubber plantations, Dayalan is now being kept in a camp along with 94 other LTTE child soldiers. On one side flows a river. Ringed in by barbed wire, the camp is guarded round-the-clock by the Lankan army.

The militant outfit has had a history of recruiting children as a part of its fighting force. According to an estimate, between 1983 and 2002, about 60 per cent of the 14,000 LTTE cadre were children. From 2002 onwards, about 7,000 children had been recruited as soldiers.

According to Unicef, 44 per cent of these were girls. Typically, most of these children would volunteer themselves to avenge the death of their parents or escape a life of poverty. Some of them were even abducted by the LTTE and forcibly made to join their ranks.

The LTTE has used child soldiers in carrying out some of the deadliest attacks on the Sri Lankan forces. In 1993 and 1996, it used them along with elite militia forces to overrun two Lankan security complexes, where they seized arms and ammunition worth millions. In 1996, in another attack on a military complex in Mullativu, underage soldiers are believed to have shot dead some 300 Lankan troops after they were disarmed. Child soldiers have also suffered heavy casualties in various offensives. In an attack described as their worst-ever setback, some 3,000 LTTE cadres, most of them children and women, were killed during an assault on a military complex in October 1995.

More than the bloody mound of bodies, how young they were was an outrage at the time. The Sri Lankan government back then placed the onus of the horror squarely on the LTTE. The authorities in Colombo have always used such underage recruitment as a potent propaganda tool against the dreaded militant outfit.

Today, the government has a distinct we-told-you-so air about it, as it showcases camps holding these child soldiers for the global media and aid agencies to ascertain these claims. The bigger plan, of course, is rehabilitation. The children are being given vocational training. “It is important that these children are helped to forget their past,” says Dr Hiranti Wijermanne, a former Unicef consultant who helps the government with child rehabilitation programmes, “and then trained to get employment.”

Dayalan is training to become a tailor. He was a one-year-old when his parents were killed in a bombing by the Sri Lankan Air Force. Brought up in an orphanage run by the LTTE, he was inducted into its suicide squad when he turned ten in 2002. As part of the regimen, he was taught how to use hand-grenades and firearms such as the Chinese T-56 assault rifle. With the infantry, he took an active part in LTTE’s counter-offensive against the army in the Mannar area of the northwest region, where he received severe shrapnel injuries. For training as a suicide bomber, however, he got the personal attention of Prabhakaran’s son, Charles Antony.

Antony is dead now, and so is his father. And every other LTTE leader Dayalan knew. When he is not at the sewing machine, Dayalan spends time in his bunker bed, staring at two words inscribed in bold letters on a wall at the foot of his bed: Amma, Appa (mother, father). Why didn’t he bite that cyanide capsule when surrounded by the army? There is a pause, and then he replies, “I wanted to live.”

Among the children in the camp is 15-year-old Aruna. She was abducted by the LTTE in 2009 after it faced a severe crunch of soldiers fighting the war. She is from Jaffna, and was being raised by her mother after her fisherman father died in a boat accident. As she was being taken away, she remembers clutching her mother’s sleeves, frantic for her to save her. But there was not much she could do. Offering one child ensured her own safety, and more importantly, the safety of the other two children younger than Aruna.

After being put up in a camp, where she refused to speak at first, Aruna remembers being hit brutally by one of her trainers. The trainer also ordered her hair cut short. “I cried a lot when they did that,” she recalls. But before she could be properly trained, the war entered its final phase, and her militant captors were overthrown.

Her mother managed to pull her out of the LTTE barracks. Then, along with her mother and two siblings, Aruna made it to a refugee camp. From there, she was made to surrender to the Lankan army by her mother. All Aruna wants now is to rejoin her family and “continue my studies”. Did she ever meet Prabhakaran? “I don’t know who he is,” she says.

Unlike Aruna, Mary did meet Prabhakaran. “I was very happy when I saw him,” she says. From a fisherman’s family in the Mullativu region, Mary says she joined the LTTE in 2007 and was trained by senior women cadres. Three months ago, she was put on frontline duty. “I was very scared as there were bullets flying all around,” she says, “We could hear explosions as well.” As the Sri Lankan Army advanced, she slipped away, blending in with other people, and then she surrendered to the army. “I threw away my rifle and just ran away,” she says. Mary was fortunate she was not caught fleeing by the LTTE; girls who were caught ‘deserting’ would have their hair shaven off and be sent back to the frontline. As for the boys, they would be severely beaten.

Vijayan is a soldier who got away—in a sense. His story is no less horrifying, though. As the LTTE’s death toll rose, it became more and more desperate for recruits.

Thus it was that senior cadres of the LTTE dragged 17-year-old Vijayan out of his home in Mullativu on 29 March. The no-fire zone had been shrinking around them, and Vijayan was hiding in a bunker with his family when he was abducted. His parents tried to stop the militants, but all they got for their efforts was the hard end of the rifle butt; a few warning shots fired in the air put an end to the last traces of resistance.

Vijayan was taken to a training camp with dozens of other children, where they were taught how to handle a rifle and stage an attack. Five days later, he escaped along with a few other boys. They were fired at from behind. Many boys died. Vijayan was lucky to get away with bullet injuries on his arm. “But I kept moving in the jungle till I saw the Lankan Army,” he says, relieved. His parents are also in a refugee camp, and there’s family life to look forward to. “I want to study further,” he adds.

It was in this camp that another young girl was reunited with her brother, after a year. The girl was taken for arms training in June 2008. She was trained with a mortar unit. During the final offensive, she was captured by the Sri Lankan Army. Her brother was inducted into the LTTE in February this year, and he spent a few weeks with them before surrendering. The girl was talking to a friend when her brother was brought in. “I cried with joy,” she says. “We want to go back to our mother; we will never leave her again,” says the young girl’s brother.

It may be a while before many of these children are reunited with their families. International human rights groups are investigating reported cases of disappearances in at least one refugee camp. All’s not well, they say. “A number of pro-government, Tamil paramilitary groups have unhindered access to the refugee camps,” says Charu Lata Hogg of The Coalition to Stop the Use of Child Soldiers. Human rights activists also question the legality of camps such as the one where Dayalan and others are interned.

“Let us be clear about one thing: rehabilitation camps, as the government calls them, cannot be run by the military,” says Hogg. “No matter what the government says, these camps are, after all, military-run establishments.”

At least the bullets have stopped flying, some camp inmates would say. It is evening, and all former LTTE child soldiers are to report at the drill ground. A female lieutenant from the Sri Lankan Army is in charge. After attendance, the children stand in attention before the Sri Lankan national flag—a flag they were once trained to bring down. From the tiger on the LTTE flag to the lion on the Sri Lankan flag, it’s a change they may only faintly grasp the symbolism of. But maybe the real difficulty will be in trying to lead a normal life. Despite all the rehab efforts, their future looks grey. Like the overcast sky above the fluttering flag.

Some names have been changed to protect their identities