The Indo-US relationship is back in ‘indispensable’ mode, goes the cheer. But let’s not delude ourselves about it. 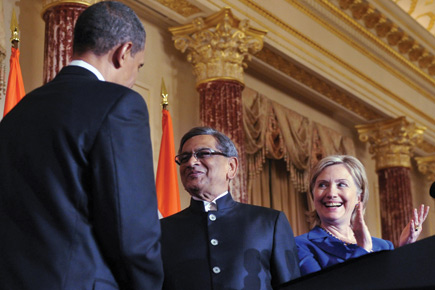 The Indo-US relationship is back in ‘indispensable’ mode, goes the cheer. But let’s not delude ourselves about it.


For an Indo-US dialogue touted as ‘strategic’, the kind of word that makes New Delhi’s policy wonks sit up, one of the two sides seemed to be having too much fun. One moment, US President Barack Obama was singing Hey Jude with Paul McCartney at the White House. The next, he was teasing Secretary of State Hillary Clinton for having a menu item named after her at one of Delhi’s finest restaurants. Lure enough to visit Delhi himself, Obama quipped, startling India’s Foreign Minister SM Krishna into a chuckle to go with the laughter all around.

But then, one can always trust Americans to lighten things up. If the Indian delegation in Washington DC, led earlier this June by Krishna, had reason to be stiff at the outset, it was soon clear from signals of warmth from the White House that the relationship was alive and well, if not exactly kicking.

Obama, in a rare gesture, attended a dinner hosted for Krishna, and confirmed his November visit to India for good measure. This, even as Indian sleuths finally got to interrogate David Headley of 26/11 fame, signalling a new resolve in the global fight against terror. Plus, if US Undersecretary of State William Burns’ hints are anything to go by, then permanent UN Security Council membership for India is still a hope.

All this signifies a ‘course correction’, say observers, after a prolonged phase in which the challenges of China and Pakistan kept Obama pre-occupied. The Indo-US engagement, it seems, is back where it belongs: in the custody of those who consider it vital to the 21st century. “The visit was an appreciation that a rising India matters to the US in the long run,” says an Indian diplomat, “that it is not a side player on the world stage.”

One sign that America’s charm offensive worked was Krishna’s triumphant declaration that the US no longer hyphenates India with Pakistan, assuring India of its ‘indispensable’ role, instead, as one of the world’s most dynamic economies.

Could this be an error of judgment? Pakistan continues to loom large over the Indo-US relationship; murderous terror camps continue to wreak havoc, largely ignored by Washington beyond the occasional chiding, even as Islamabad gets $8 billion in US aid for the asking. That relationship seems no less cosy than it was during the Cold War—which, of course, would not be any of India’s concern if the terror camps were to vanish. But they haven’t.

An aspect central to the visit was the government-to-government purchase of weaponry from the US. India will receive C-17 Globe Masters for trials this winter along with AH-64 Apache helicopters and M-777 ultralight howitzers. India has also signed a deal to buy P8i naval spy aircraft. And then, there’s the big one—the famous multibillion dollar 124-unit multi-role fighter aircraft order for the Indian Air Force.

Yet, for all the action, the defence relationship remains lopsided. India, unlike China which slapped sanctions on Boeing when the US decided to sell weapons to Taiwan, cannot as much as a murmur while America arms Pakistan with F-16s and the like. So, even as New Delhi’s dependence on Washington only goes up by the day, evident in the stringent ‘end user agreements’ (and inspection clauses) to be signed as a condition for the arms purchases, there is little it can do to contain Pakistan’s armoury.

“We have an important relationship with India on the military front, and also with Pakistan,” Teresita C Schaffer, director of the South Asia Program at the Center for Strategic and International Studies, tells Open, “That’s something we both have to live with. The whole point of ‘dehyphenating’ US relations with India and Pakistan was supposed to be that US relations with India would not be hostage to what we did with Pakistan, and vice versa.” So, America’s point is clear: you pay for arms that no one else will give you and shut up about our relationship with Pakistan.

For all the warm atmospherics and grand words, a hardnosed assessment of the Foreign Minister’s visit throws up little to celebrate. Old problems, for example, still fester. Krishna made a direct demand for more access to dual-use technologies that India has long sought from the US (what the Nuclear Deal was meant to presage). He drew a blank. The joint statement issued at the end of the ‘strategic dialogue’ only referred vaguely to a ‘spirit of strategic partnership’ vis-à-vis America’s high-tech export controls. This is diplomat-speak for ‘no headway’.

Meanwhile, in an alarming development, The Institute for Science and International Security, a Washington-based entity, has accused India of expanding its military nuclear site near Mysore. This could be another thorn in the side of future talks on the matter.

Clearly, now that George W Bush is no longer in the White House, India is slowly coming to terms with a strategic deceleration on matters of critical importance to India. For all the mutual backslapping, the trust deficit between the world’s two great democracies has widened visibly since 20 January 2009. When President Obama visits India, he’d do well to bear this deficit in mind—and plan his approach accordingly, even if he can’t resist a joke or two. And some gastronomic adventurism.