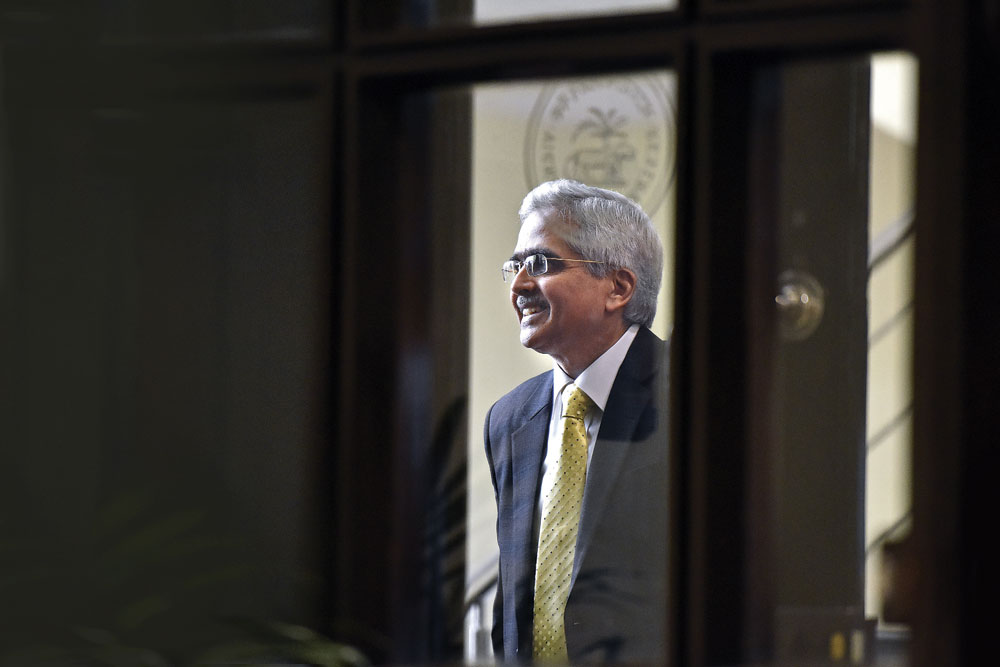 
WHEN SHAKTIKANTA DAS sat down to explain the economic situation in India May 22nd, the prognosis was grim. In his prepared statement, the 25TH Governor of the Reserve Bank of India (RBI) calmly explained the near-depression-like conditions in the wake of the coronavirus pandemic. After reeling off dire economic statistics, Das exuded hope in his last words: “It shall be our endeavour that RBI’s actions and stance contribute to laying the foundations of a better tomorrow. Today’s trials may be traumatic, but together we shall triumph.” With those words, he quietly left the stage.

In contrast to flamboyant governors of the past—who gave plenty of juice for headline writers—the 63-year-old governor was self-effacing, to-the-point and correct in that straightforward public dealing that characterises India’s higher civil service. The press largely ignored him that day—as it has since he took charge on a turbulent Wednesday in December 2018. The day before, Urjit Patel had quit. A storm of sorts had been unleashed against the Government. Influential economists sketched a doomsday scenario: the credibility of the central bank was gone and the new governor would be ‘exposed’ as soon as a crisis emerged.

A year-and-a-half has passed since and a crisis is at hand. No one can accurately foretell how the pandemic will end and the costs it will impose on different societies. But so far, the Government and the central bank have displayed coordination of a kind not seen in a while. On May 22nd, after the Monetary Policy Committee (MPC) ended its meeting, it decided by a 4-1 vote to reduce the repo rate—the rate at which the RBI lends money to banks for the short term—by 40 basis points. This was meant to inject liquidity into the system and allow cash-strapped businesses to borrow at cheaper rates. But even more importantly, the reverse repo rate—the rate at which the central bank borrows money from commercial banks—was brought down by the same amount, 40 basis points, to 3.35 per cent. The major choke point in the Indian economy today is the unwillingness of banks to lend freely as they have been spooked by the risks involved in lending and prefer to park their surplus cash with the RBI. With a reduction in the reverse repo rate, some of those disincentives to lending may go.

In this—and in a slew of other credit loosening measures implemented since March when the crisis emerged—Das has been quick off the mark. He reminds one of the decisive steps taken by YV Reddy in 2008 when the global financial crisis broke out. Like Reddy, Das, too, was a finance ministry mandarin, perhaps something that gives him an acute perspective on the sinews that join the economic and financial limbs of India. Perhaps that stretches things beyond what is reasonable. There have been instances of civil servants turned RBI governors having prickly relations with the finance minister of the day. One recent example is that of Governor D Subbarao and the then finance minister. The dispute was over the appropriate level of the policy rate. Such differences are mostly aired internally, but there were plenty of occasions when matters went public.

What makes Das different is the absence of such rancour after a period of exceptional volatility in relations between the head of the monetary authority and the finance minister.

“Disputes over interest rates and regulatory matters are usual because of the unique structure of the banking system in India. The owner of public banks is the Government while the regulator is the RBI. Then there are political imperatives to push growth. But as long as the incumbent governor does not confuse RBI’s autonomy with independence, the boiling point is reached rarely,” says a long-time RBI observer. Das, says this observer, is unlikely to roil matters.

“He has done spectacularly well on key fronts. Where one can find some fault is the state of banking supervision. But that is technically not Das’ creation: the problem has been ignored for more than 20 years,” adds the observer.

Unlike many central banks across the world, the RBI is owned by the Government. Section 7 of the RBI Act, 1934 clearly spells out that the Government can send directions to the central bank ‘from time to time’ in ‘public interest’. What matters is not independence but operational autonomy for the RBI to undertake actions necessary to maintain financial stability and other objectives. Section 7 powers have been rarely invoked and the last time they were, over a dozen-odd issues, the Governor in question, Urjit Patel, resigned within a fortnight of the event.

At that time, this ‘assertion’ by an RBI governor was celebrated among intellectuals without any concern for the turmoil it could cause in the macroeconomic management of the country. The issue ultimately got mixed with some vague notion of ‘resisting’ a Government with an overwhelming parliamentary majority not seen in decades. Ultimately, no one gained except a handful of commentators who got a kick out of saying an independent institution had been ‘destroyed’.

It is to Das’ credit that he quickly lowered the temperature, gave the markets what they wanted—mainly confidence—and once again brought the ‘banking is boring’ respectability to the central bank. His background as a civil servant who manned key positions in the finance ministry and other economic ministries, such as fertilisers, helped him gain the necessary experience. People made fun of the numerous clarifications that were issued by his department during the demonetisation exercise in 2016. But no one, even once, looked at the scale of administrative challenges involved. The Government did the best it could. In a sense, Das came prepared to meet sudden administrative and economic challenges that could be thrown at him. The pandemic that has halted the Indian economy in its tracks is one such challenge. So far, the macroeconomic management has been conservative. The Government has not spent wantonly to revive growth and the RBI under Das has prioritised liquidity injection to revive the green shoots even as it is acutely aware of the pick-up in food inflation since last month. It has, rightly, put emphasis on growth.


Das has been quick off the mark. He reminds one of the decisive steps taken by YV Reddy in 2008. Das, too, was a finance ministry mandarin, with an acute perspective on the sinews that join the economic and financial limbs of India

The last 17 years or so have seen plenty of ups and downs in relations between the two economic managers of India, the RBI and the finance ministry. How should one locate Das’ actions since 2018 against this backdrop?

Friction between the finance ministry and the RBI is nothing new and goes all the way back to the tenure of the first Governor, Osborne Arkell Smith (1935-37), who lost what was clearly a turf war with the Finance Member of the Viceroy’s Executive Council, Percy James Grigg (1934-39). To use a concept from modern economics, this has set ‘fiscal dominance’ above ‘monetary dominance’ in India since. The next example of a similar fight resulted in the resignation of Benegal Rama Rau and the end of his run at the RBI on January 14th, 1957. What began as a fight between him and Finance Minister TT Krishnamachari escalated into a series of letters between Rau—a long-serving Indian Civil Service officer—and Prime Minister Jawaharlal Nehru. Nehru described Benegal’s assertion of the RBI’s right to choose a policy different from that of the Government as ‘completely absurd’.

These run-ins between the RBI and the finance ministry are so distant—and took place in an era so completely different from ours—that they are best described as legacy fights. While they shed light on later events, the India of that time was dominated by the fiscal authority and the central bank lacked a crystallised sense of what is today described as monetary policy. At that time, and well into the 1990s, India had a ‘credit policy’: the central bank simply met the credit needs of the Union Government.

Automatic monetisation of government debt was an accepted practice. It is important to remember that this was not in the distant past, just a little over two decades ago. But it was also a time when India was rapidly integrating with the world economy.

At that important juncture, when many instrumental and institutional details were yet to be ironed out, the then Governor of the central bank, Bimal Jalan, enjoyed very cordial relations with three different finance ministers of very different persuasions. Since then, Das is the first RBI governor who has not had a friction-laden relationship with the finance minister.

From the time Jalan demitted office in 2003 till about 2014, the fights between RBI governors and finance ministers were couched in economic terms. In common parlance, these were over the fixing of interest rates, with governments wanting lower rates, something they believe is essential for economic growth. On the other side of the equation lies a different interpretation: Can there be growth without macroeconomic stability? What if lower interest rates and continuous injection of money by the banking system fuelled instability and not growth? In the political dust-ups from the time of YV Reddy onwards, these questions were always at the forefront of analysts’ concerns, but one dominant theme remained: who the political master was. These questions finally came to a head during the tenure of Raghuram Rajan.

Unlike the usual fights over economic issues, Rajan’s transition from one political dispensation to another was not smooth. Unlike the usual source of trouble—interest rates and banking concerns—trouble began in an entirely different, and unexpected, area: political speeches. In a lecture on October 31st, 2015 at IIT Delhi, Rajan raked up the issue of tolerance as an ingredient of economic progress. It was very unusual for a central bank governor to give a talk on an explicitly political topic, something that had not been done before. That laid the seeds of mistrust between the two economic managers. Finally, Rajan left at the end of his three-year term in September 2016. His departure created a storm that did not abate until two years later, when Das took over the reins of the RBI.

It is hard to argue that civil servants don’t rock the boat while handpicked specialists are ‘hard to manage’. There are plenty of instances when former civil servants-turned-governors have disagreed with what the finance ministry wanted. But there is one distinction: these fights have never reached a point of no-return when Section 7-like situations emerge. In recent years, these distempers have exclusively been the preserve of specialists. From that perspective, Das is unlikely to carry a fight—if one emerges—to the point that things get out of hand.

It is another matter that such calm is interpreted very differently in contemporary India. One should not be surprised if this relative balance is dubbed as ‘institutional weakness’, or even obsequiousness. Depending on one’s perspective, it can be described as that old Indian feeling that genteelness beyond a point is weakness or, its modernised version, that a ‘non-entity’ has been placed in a key position. Both perspectives are born of a peculiar fashion of political interpretation that has come into vogue since 2014. It has no bearing on economic management in a crisis, or even in normal times.