The Cult of the English Shirt

With Thomas Pink entering the Indian market, English shirts have made a comeback in fashion talk 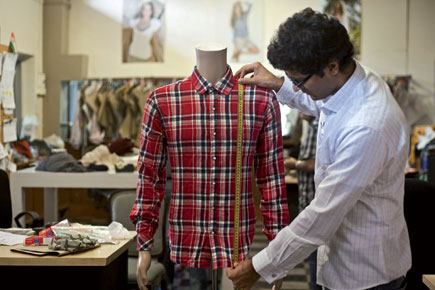 With Thomas Pink entering the Indian market, English shirts have made a comeback in fashion talk


Walking down Sloane Street nearly 12 years ago as a student in London, Rajat Kapoor walked into a store called ‘Pink’ out of sheer curiosity. He always liked the colour. Back then, Indian brands were still hesitant to embrace it for menswear. So the store was a wonderland for the then 22-year-old Kapoor.

“I bought two shirts immediately,” says Kapoor, a Delhi businessman who deals in yarns. “I started buying shirts only from Thomas Pink, even if it meant travelling all the way to the UK or asking friends or relatives to pick up a few for me.” Today, Kapoor has about 30 shirts and some 80 ties from Thomas Pink.

One reason for the popularity of the shirts is the colour (though Thomas Pink makes shirts in other colours too). Pink is considered a very English colour and is used by traditional shirtmakers to brighten up London’s grayscapes. The others are their fit and the quality of cotton that make their shirts a good buy even at prices nudging 100 pounds. That says something about brand Pink in a world of intense retail competition, where even the most upscale English brands are up for grabs at bargain prices once every few months. Visit the websites of famous shirtmakers and you will find many sales going on right now.

Thomas Pink, set up by three Irishmen in 1984 and named after an 18th century tailor who stitched coats for huntsmen, is now in India. The first store opened in Delhi and a Mumbai outlet is expected soon. Its dedicated patrons are relieved—they no longer have to travel to the UK for the shirts as Kapoor once did.

So what’s all the fuss about English tailoring? Well, for one, they draw on the great history of London streets like Savile Row and Jermyn Street, which are known for traditional men’s bespoke tailoring. Jermyn Street was established under the patronage of Charles II in the 17th century. Savile Row, in the May- fair area of Central London, was developed in the 18th century and renowned for its famous clients. Winston Churchill was one, and so was Ian Fleming, the creator of James Bond. The arrival of Thomas Pink has brought a little bit of Jermyn Street to India.

Ankit Gupta, a Delhi stylist who makes menswear at his studio, Soule, in Vasant Kunj decodes the appeal of English shirts. “The ready-to-wear market has appropriated the style, and even traditional brands like Thomas Pink and TM Lewin [now] have shirts that can be bought off the rack. But the concept of a classic English shirt is based on customisation,” he says. “A typical English fit,” says Gupta, “is meant to complement the body. It is shaped around the contours of the shoulder, the sleeves and the abdomen. They are longer than usual shirts and are flattering because even if you have a paunch, they will fit you and suit your body type.”

A classic English shirt will be bespoke, and it will be expensive. According to Gupta, it is possible to pinpoint what kind of Indian man will wear one. “[Someone who is] upwardly mobile, not young, [someone] who prefers to keep it crisp and understated,” he says. “Younger people in cities like Delhi and Mumbai prefer the Italian fit, which is a slim fit and makes you look leaner. But you have to be in shape to fit into that shirt, which is not the case with many [Indian] men.” There is also the American counterpart of a formal shirt. It is typically baggier. “As most things American, a typical American dress shirt is very big, particularly along the armhole and sleeves,” says Gupta. “It is somewhat unflattering.” It is not just Italian shirts that have a slim fit. Almost all leading brands today, even American and English ones, have slim fit and super slim fit versions. But the understated sexiness and tailoring history of English shirts give them a cachet, even if some of their reputation, and pricing, can be attributed to hype.

Says Vikrant Mehta, a Delhi-based private banker, “I usually buy shirts from Thomas Pink and Charles & Tyrwhitt in London. English shirts have refreshing checks and their colours are understated and sophisticated.” Mehta remembers buying a Louis Philippe shirt for his father some eight years ago from Shoppers’ Stop, but that was a rare occasion that he shopped in India. Exclusivity appeals to him, he says. “I wear Armani suits and mostly shop abroad. But with luxury malls like Emporio coming up in Delhi, I don’t mind heading there now.”

While the well heeled may afford the extravagance of buying shirts from England, mid-range brands in the Indian market also offer English shirts. Van Heusen, Louis Philippe and Peter England advertise themselves as brands with an English tradition, though the shirts are made in India by an Indian company (Madura Garments, owned by the Aditya Birla group).

“There is nothing particularly English about them now except that they have English names,” says Puneet Dua, a retail consultant for luxury brands planning to come to India. “These were British companies at some point, but now they are manufactured by Indians for Indians. At affordable prices too, ranging from, say, Rs 1,100 to Rs 2,500.The term ‘English’ is key here. They are regular shirts made in standard sizes, but anything English becomes aspirational and adds a hint of sophistication,” he says.

Taking their cue from this ‘English’ fixation in India, a group of six professionals started Stiffcollar.com in Mumbai in August 2011. Their tagline goes: ‘snooty English shirts’ for men. But the founders of the e-commerce venture claim to follow the “swadeshi tradition”, by which they simply mean tailoring an English tradition to the demands of the Indian market. “We do affordable cotton shirts following the traditions of bespoke tailoring, in particular, the Savile Row [tradition],” says Stiffcollar founder and COO Abhishek Lulla. He decided to set up the venture having returned from the US and not “finding a single decent shirt to wear.’

Co-founder Kabir Hingorani belongs to the Liberty Legacy family, which pioneered readymade shirts in India in the 1970s. Hingorani too had returned from the US and couldn’t find the right shirt for himself in India. American shirts were too baggy and Indian ones not his type. “The trick lies in the details, that’s what we learnt from studying the Eng- lish tradition of tailoring,” Lulla says. A research team for the firm went to London for a week to study English shirt-making methods. On their return, they created their own version of the English shirt, which could be ordered online. Its features include discreet stitching, a split yoke (the back panel along the shoulders) and greater length. The line is affordable, starting at Rs 799. They even have quirky options like ‘paunch fit’ and ‘banker’s cut’. “The idea of English shirts here is comfortable, quirky and affordable,” Lulla adds. They have taken care with their advertising, which is humorous and adds to the appeal. A panwala, an istreewala and a courier boy give lessons in English clothing, delivered in a perfectly clipped English accent. “We have just taken little things associated with the English tradition and built our brand [around those nuggets],” he says.

Dua says it succinctly. “A shirt is a shirt, it’s the brand that matters eventually. Here, it is brand ‘English’”.