Guess what defines the culture-proud Bengali bhadralok’s emergence on the fashion scene? 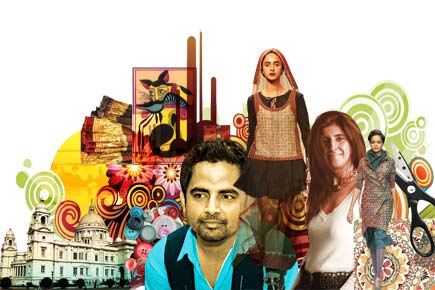 Guess what defines the culture-proud Bengali bhadralok’s emergence on the fashion scene?


If there were any doubts about the existence of a Kolkata School of Fashion, they should be promptly dismissed. As anyone who knows me will tell you, my Kolkata connect is limited to Left leanings, a love hate relationship with rasgullas and an obsession with Felu da—the detective Satyajit Roy created. Now, however, even the most ardent Bengali basher would be forced to admit that it’s the Kolkata School that finds itself at the head of the Indian fashion movement. In fact, it may just be the only fashion movement in India now.

They are finally coming out of the shadows of ‘senior’ Delhi and Mumbai designers and are at the head of a larger movement to intellectualise fashion. And it may just have given rise to something unimagined—the Bhadralok designer. Sabyasachi Mukherjee and Anamika Khanna are headlining the show, heralding the arrival of a newer lot of promising, often edgy designers like Dev r Nil, Kollol Dutta, Shantanu Goenka and their ilk on the scene.

The clothes are almost always handicraft, texturising, layering, embroidery rich, and have a general aversion to bling. Call it an ode to its history or the Brit influence, the colours are almost always subtle, often bordering on the English. The look is often slightly dusty, elegant, yet at the same time, contemporary—clothes that exude sensitivity. The new Bengal fashion icon isn’t exactly Ray’s Charulata, but lives somewhere between Bhansali’s and Anurag Kashyap’s Paro, probably closer to the latter.

There is, however, a larger question—can this immersion into kantha (a type of embroidery from Bengal), this obsession with layering and the superlatively cerebral stories be construed as a movement comparable to art? Senior designer Ritu Kumar who started out with a shop from Kolkata seems to think so. “Most designers from Bengal have a very strong sense of individuality, but above all, an intrinsically Bengali handprint,” Kumar says.

Even as the original Bhadralok would undoubtedly cringe at its new high fashion avatar, the newer lot is only too happy with its adda heritage. Intellectuals too have their bit to smile about—the collection notes that most hacks copy from are at their intellectual best. Plus, of course, much like the original Bhadralok, the Kolkata designer shows some weakness for the British—in silhouettes as well as colours. But his muse still wears the seductive alta (a red dye) at her feet, her hair still teasingly open on her shoulders, her keys tugging at a laal paarh corner, and she wears the ultimate sign—nerd glasses.

Given their long history of intellectualisation, it’s then only natural Bengali designers would come up with a term that’s more meaningful than the ‘Kolkata School of Fashion’ we’ve come up with. Designer Kiran Uttam Ghosh dubs it ‘Intellectual Intricate Fashion’.

“Here, the Kolkatan spirit of adda or meandering through everything has probably permeated through to each designer and the work. Despite deadlines, there seems to be irreverence for the value of time, a disregard for the commercialisation of it all (fashion), despite it eventually resulting in commercially viable clothing,” she says.

But, since word play can hardly be used as a silhouette, there are other tools that the Kolkata School employs—like marrying a completely local sensibility with a colonial influence. Something that Dev of the Dev r Nil duo explains has been used by artists and painters with gloriously glamorous results. And it’s this interplay that makes up an integral part of the Kolkata School of Fashion. Kumar explains further, “I think Kolkata and its hinterland produce a very different kind of designer: he’s handicraft and colour sensitive, he is very strong in beading and embroidery,” Kumar explains.

Plus, there is of course the deep-seated pride that Bengalis have in their culture. “Culture and intellectualism are maximum in Kolkata,” designer Agnimitra Paul says, her agreement on Kolkata School’s intellectualisation frequently crossing over into rhetoric. “I think a lot of history has come to Kolkata,” she says. Even though the Bengali’s intellectual quotient is bound to be contested, a certain amount of Bengaliness, whether others admit it or not, seems to provide an atmosphere conducive to creativity.

“Kolkata has been a centre for credible art down the years… most credible art collectors have had a constant connect with the city. Since fashion is an art form, it follows that credible fashion would emerge from this part of the world too, much like intellectuals,” Ghosh says, explaining intellectual fashion.

There is that, and, of course, the fact that unlike the rest of the country, designers here don’t source glorified nautch girls, except Devdas’ Chandramukhi, of course.

BUT DOES IT ACTUALLY EXIST?

There is still that one question—does a Kolkata or Bhadralok School of Fashion actually exist? Or is it the work of an underpaid hack?

Most designers agree with the coinage and are more than vocal in stating that the primary sensibility of the Kolkata School is its deep immersion within local Bengali handicrafts. The point of contention, however, is about larger issues: about its parentage. Even as Agnimitra Paul is gung-ho about ‘Kolkata School of Fashion’ and Ritu Kumar and Dev agree with the coinage to a large extent, it is superstar Sabyasachi Mukherjee who disagrees with it, and then agrees.

“I would really like to know if it exists,” he wonders. His objection,though, is more to the definition than the term itself. “Anamika [Khanna] and I are the big players and it’s a coincidence that we both have very indigenous sensibilities.” Mukherjee says. He feels that while the name Kolkata School of Fashion may have been given to the sensibilities of a larger number of designers, in essence it’s his and Anamika Khanna’s design sensibilities “cloned several times over”.

“I say this at the cost of sounding pompous, but the fact is that I started the deluge of Kolkata designers onto the scene,” Sabyasachi says. According to him, the intellectualisation of fashion that has now become the central pillar of Kolkata sensibilities, has actually arisen because of peer pressure on the newer lot of designers in the country. “Suddenly, everyone wants to intellectualise their collections,” says the man, often dubbed ‘The King of Bengali Kitsch’.

At a variety of levels, what Mukherjee says does make sense—since it was him and Anamika who brought into the big spotlight the sensibilities we now refer to as Kolkata School.

What is undeniable, though, is the work done by designers like Mona-Pali and Sharbari Dutta who are credited with promoting kantha. Mona-Pali’s collections over the years have drawn liberal inspiration from Bengal and its culture, and the duo have even created collections with terracotta and Jamini Roy’s paintings. Pali insists that it was they who made layering, folk motifs, appliqué and patch-work popular. “We have done a lot of things you will see in a lot of other designers’ sensibilities now,” Pali contends.

However, it’s Ghosh who has a more politically accurate take on things. According to her, much of the groundwork had already been done by such designers as Mona-Pali and Ritu Kumar, and great design and art always existed in Kolkata.

True to what she says, high art and design had always existed in Kolkata—even if it was something as simple as a crisp Tangail sari worn by a lady on a tram. What didn’t exist, though, was Kolkata as a design superpower. The credit for which, in the times we live in, rests with Sabyasachi Mukherjee and Anamika Khanna.

Parentage debates aside—what is it that has set the Kolkata School of Fashion apart from the ‘relative vacuum’ of Mumbai, as Ritu Kumar likes to call it? Ghosh feels it’s Kolkata designers’ eye for incredible detail, something that she feels may often be missing from the work of designers from Delhi and Mumbai (a charge that these designers are bound to contest).

Indeed, a keen eye for detail is the de facto USP of Kolkata School. It revels in making a simple piece of malmal virtually unrecognisable by doing kantha work, machine work, layering, texturisation, printing, weaving, washes and a whole lot more—often on the same fabric.

In fact, you would be surprised at the amount of work that Sabyasachi puts into even a simple fabric, to transform it into his creation.

There are others, admittedly, who insist that a part of this is because the Kolkata designers are younger, fresher and thus still evolving a style sensibility of their own (the most common criticism of Delhi designers is that they are set in their ways, to the point of being stuck).

Sabyasachi argues that it is the quality of craftsmen in Kolkata that makes the difference, since a chunk of this work across India is done by these very Bengali-Muslim kaarigars (carftsmen).

Plus, Bengal’s proximity to textile centres like Varanasi and Bhagalpur, a historic tradition for handicrafts and a history of printing, batik of course, stacks things in its favour.

The only question that you are bound to ask then is—why? Why did it take Kolkata so long to stand up and be counted? The answer, much to Mamata Banerjee’s displeasure, has nothing to do with the Left Front government. It has more to do with the fact that, despite all the opera houses, it did not have a society culture. Its women—whose stomping ground Page 3 Open has predicted the death of—were not around schmoozing in the clothes of Kolkata designers.

To top it all, Bollywood wasn’t exactly a good friend, until Rani Mukherji started wearing Sabyasachi’s pieces to fashion weeks, and Sharbari Dutta measured up Abhishek Bachchan and Aishwarya Rai for their wedding trousseau. It was only then that non-Bengalis started taking notice of Kolkata designers. Prominent Bengali like Bipasha Basu, Riya Sen, Sushmita Sen and the lot, of course, helped Bengali designers become household names.

However, even as we come to terms with the Kolkata School, there’s an undercurrent here too. Dev warns that a certain section of Kolkata designers have already moved on, beyond the Kolkata School, in their quest for individuality. “There is a current which is more modern and in your face than the Kolkata sensibilities, which may get boring after a point.” That, however, is a movement that’s still very young, and is best left undocumented lest it be disturbed.

But Kolkata School of Fashion apart, you will still see Bengali women in shockingly mismatched saris—the difference, though, is that now Sabyasachi Mukherjee can’t seem to make enough of them for North Indian weddings. Unfortunately, the Kolkata man hasn’t been as lucky. He’s still the one on a hill station in a monkey cap, holding a water bottle.