A village crawling with snakes that are revered by humans 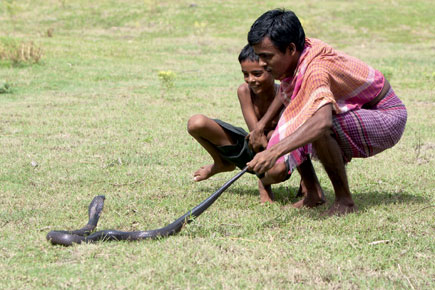 A village crawling with snakes that are revered by humans


MUSURI, WEST BENGAL ~ As we drive on a whim into Musuri, a little hamlet of paddy field workers near Bardhaman district, West Bengal, the taxi driver gamely endures my frequent forays off the main highway. Musuri is accessible by an easily-eroded series of pathways: from main road to cemented spur to smooth dirt and finally into the village.

Glossy ducks wallow in tanks, calves suck on their mothers around carefully piled cakes of cow dung, chickens barely stay inside their coops, and children run around the broad dirt lanes of this village of huts with dried grass tops. It seems a village like any other, except that it is not. Musuri is a place where venomous snakes outnumber its 1,200-odd inhabitants. Snakes camp in people’s bedrooms and kitchens. In dry spells between rains, they slither around the streets, hunting frogs or simply soaking up the sunlight. When we arrive, the BBC and National Geographic have already set up week-long camps to study and report this uncommon coexistence of man and reptile.

A group of men sprawled under a wrinkled Champa tree get chatty. “We don’t call it snake—it is Jhanglai, snake goddess. It is derogatory to call it anything else. They are more visible in summers, when it is too hot for them to stay in their dens. They sneak into the corners of our huts and nest there, and if we are not watching, gobble our food.” A little boy in his khaki school shorts springs to his feet and exclaims, “A jhanglai ate up three dims (eggs) at home the other day. But it never bites my dog. I have one at home. Come, I’ll show you my jhanglai.”

In the grubby grey mud courtyard of his house, a small steel bowl of milk is kept as an offering to the serpent goddess. Tanmoy, the young boy, lays himself flat on the floor, extends a hand underneath his wooden cot, and pulls out an obviously livid black cobra, holding its tail playfully as the snake writhes and thrashes about. Tanmoy dotes on the creature. And he knows it will give his friends at college in Bardhaman the creeps, though his conspiratorial village mates delight in indulging this playful urge, cheering him on to wrap it around his neck. When his mother calls out to him, he throws his pet on the bed, letting it slither under a cotton pillow.

These uncuddly pets are known to sting those who test their patience. An angry serpent’s victims are rushed not to a hospital but the local temple purohit. Shyamal Chakraborty, a matchstick-thin toothless priest, examines the snake bite, pulls out a tattered book inherited from his Brahmin forefathers, and chants a few mantras. A quick pujo in honour of the serpent goddess, and then the final step—a dip in the algae-ridden Jhankeshwari Pond, where the victim bathes with his hands cupped before him until the poison is washed away by holy water. Shyamal claims possession of a journal with the records of all victims treated by him and his forefathers. Only a few of those 250 victims died.

One of the unfortunate exceptions was Sraboni Chattopadhyay, a migrant from Odisha. Pottering around her backyard with her wrinkled hands once, she was startled by a long krait lolling in a flowerbed. Seizing hold of a stick, she battered the jhanglai to death. Around two years ago, she died of snakebite.

Shyamal remembers it quite clearly, nodding his head in priestly disapproval, a tuft of hair on his head moving nod for nod. “Shudra,” he says, referring to her caste, “She was a Shudra who killed a jhanglai. I refused to treat her. Of course Jhankeshwari Devi had to settle the score.”

The legend of Jhankeshwari Devi is part of Bengal’s beloved folklore—the ‘Behula Lakhindar’ story, inspiration of numerous movies, literary works and TV shows. The name ‘Jhankeshwari’ is derived from the ‘jhankar’ of Behula’s bangles. According to the myth, Lakhindar was the son of Chand Sadagar, a preposterous man known for his derision of Manasa Devi. To spite him, she orders her serpentine creatures to bite Chand’s first six sons. So Chand gets Lakhindar married to Behula, the epitome of love and loyalty in Bengali literature. After their ostentatious wedding, Manasa sends her most venomous snake, Kalnagini, to sting Lakhindar. Desperate to revive her dead husband, Behula places his lifeless body on a raft, and sails him though the trauma of purgatory towards paradise. Once in heaven, she wins the gods over with her beauty and grace. Manasa, defeated by her worship, loses her ability to poison people. The triumphant Behula agrees to return her venom in exchange for Lakhindar’s life and the condition that she will not use it against the villagers of her chosen villages.

Even today, the villagers of Posla, Chota Posla, Palsana, Bhatar and Musuri believe that snakebite can do them no harm. According to another popular folktale, after all seven queens of a hapless king died a treacherous death, their unsettled spirits began visiting this cluster of villages as nagins (female cobras). Ever since, hundreds of cobras have lived with men in perfect harmony here.

By now, an increasingly raucous party has assembled outside the Jhankeshwari temple in the heart of the village. Nayan Dey, a man in his mid-fifities with a stylish quiff of silver hair, bounds out, clapping hands and barking orders to a younger boy, asking him to show us videos of the grand pujo that’s conducted annually on his ‘mobeel fone’.  A lad in ‘Tomy Hilfiger’ shorts shyly pulls out a Chinese phone and plays the clip.

On the hazy screen of his phone, we see images of the temple adorned with strings of marigold to welcome thousands of villagers crowding in from nearby villages. People arrive on tractors, carts and on foot. A loudspeaker is brought in from the nearby district of Bardhaman, belting out popular film songs in Hindi and Bengali.

A small stage is set up for a troupe from Kolkata to enact the Behula-Lakhindar story. The spry and lively direction gives actors plenty of moments to sparkle. A painted stone with a red flag flutters in the breeze before the altar room, decorated with hibiscus flowers and doused with incense sticks. A few weeks earlier, a brass idol of Jhankeshwari Devi sat over these stones until it was snitched overnight, leaving the temple lock broken and villagers full of curses aimed at the crook. On the auspicious day of Jhankeshwari pujo, a goat is dragged to this spot and sacrificed with due pomp and ceremony, its blood spilling onto a wooden structure that’s as dilapidated as hallowed. A seven-foot long cobra with a yellow ring around its neck slithers onto the altar, puffing its hood as the goat yelps till its eyes close.

Dr TK Ghosh of Burdwan Medical College says that the hospital admits at least 10 patients with snakebite every day—mostly from villages in and around Bardhaman. “Researchers at our college have visited these villages to find that the snakes are mainly venomous species of cobra and krait. But venom is not a word to be used lightly. It is ornately suggestive, conjuring thoughts of lethal snakes. According to findings, nearly all snakes, even those considered non-venomous, do actually produce these poison proteins. And producing venom and endangering human health are two different issues. But somehow, rarely do these patients die. A cobra sting, I know, can be fatal, but none of them has actually succumbed to it,” he says. “To address these concerns, we wanted to study these villages,” he adds, “Perhaps their old genes had developed some new tricks… developed antibodies for serpent venom.”

The researchers, however, have little hope of making any progress. “When the experts requested them to hand over their snakes on the promise that they will be returned after the study, the villagers refused,” says Dr Ghosh.

In defence of that refusal, Nayan Dey says, “What if Jhankeshwari Devi turns against us? We cannot afford that.”

Meanwhile, a young cobra, about a foot-and-a-half long, slithers out from beneath a bush, stops a few metres before us, and puffs its hood. Villagers fall to their knees and bow in reverence. “Jai Jhankeshwari Devi!”