...and the splendid isolation of talking heads doing election analysis in TV studios 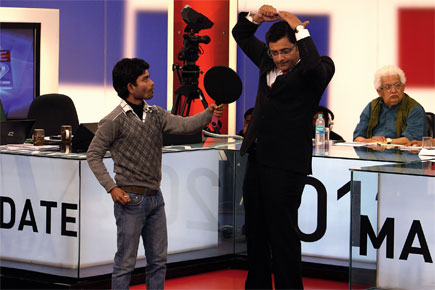 
Digvijaya Singh is speaking to us on Times Now, lit up in the dark at his home, as figures shuffle furtively in the background. It is late in the evening of 6 March, well after the results—which are disastrous for the Congress—have come in. Arnab Goswami, who seems to be the only one with any energy left, which is remarkable since he has been doing almost all the talking, turns to Digvijaya and asks if he would stay on for more questions after a two-minute break. Digvijaya looks up and smiles: “I have all the time tonight.”

It is a rare moment of candour in the television studio where I have been offering occasional comments as one of 14 talking heads who have been part of Times Nows’ ‘100 hours’ of election coverage.

It had started on the evening of 4 March, after the exit polls had come in. An hour or two into the coverage, we had all trooped out for a break, looking at each other in amazement. I was not alone in feeling that most of us had, with little or no prodding, ended up offering comments that were speculative at best and foolish in general.

At the end of day one, I realised that I was not the only one perplexed. Outside the studio, sitting in a conference, Arnab told us, “I’m not sure even I know what we are doing, but people are watching us.”

The wisdom of my own contribution at the time seems obvious in hindsight. On Punjab, I predicted the Congress would win thanks to the decimation of the BJP in urban areas, and on UP, I had offered the insight that pollsters always underestimate the BSP and as a result the SP numbers would fall well short of a majority. The pollsters, while not accurate, were at least closer to the truth—they’d predicted a closer contest in Punjab than I had, and were far more accurate on the BSP’s debacle than I was.

I had, like most politicians and journalists, been caught up in the reality that a TV studio creates. And whether we like it or not, it is a reality that then seeps into our political life.

Sometimes, it is a matter of circumstances. As the trends were pouring in on the morning of the 6th, Kamal Farooqui of the Samajwadi Party was speaking to Arnab Goswami, who was clearly feeding off the moment, rocking back on his heels before leaning forward, arm raised, thumb cocked and index finger pointing out each time he shot a question.

Kamal Farooqui: “Please give me the right to stay silent sometimes.”

For a brief spell, the experts believed that Ajit Singh’s Rashtriya Lok Dal (RLD) would provide support to the SP, with Jayant Chaudhary as Deputy Chief Minister of UP. In the end, the SP had no need of the RLD.

This truth is not completely under anyone’s control, though some people do have more influence than others. We, the talking heads, are no better than performers at a circus, doing our turn when called upon to do so by Arnab the Ringmaster. Years of professional experience are reduced to a scramble to be heard among other contending voices seeking to make a point, willing to opine with equal ease on the possibility of President’s Rule in UP or the reason for ‘brand Rahul’ failing to make an impact. It doesn’t seem to matter that you have been through the grind often enough in the past to be aware of the pitfalls.

Within the first half hour of trends appearing on the screen, Sudheendra Kulkarni of the BJP was gleefully telling us: “TV reporters who were given the BJP beat told us they were being given a ‘marginal’ beat, but now we seem to be the prime beat.” On NDTV, the affable Dorab Sopariwala, who had been through this enough times to know better, termed it an ‘Uma Bharati victory.’ Within the next half hour, it was clear that the BJP was set for its worst performance in UP in two decades.

The ease with which these words appear and disappear, the ease with which all of us appearing on TV can revise our opinions and sometimes even our facts within the hour makes such acts possible. Clearly, the medium has a logic of its own that often exceeds any individual’s ability to craft it to his or her end. Rahul Gandhi’s act of taking responsibility for his party’s dismal showing was a case in point. Many thought it was brave of him to come out and own up his role in the party’s defeat, but once again, the appearance lacked the sort of interactivity with the media that could convey a sense of equality between the viewer and the speaker. Instead, it was just another gesture from a high ground, entirely different from the ease and affability with which Akhilesh Yadav speaks to us or answers our questions.

Whoever crafted that televised moment, Rahul or his advisors, will have to live with the realisation that whether they like it or not, the image that will live on will be of Rahul walking away with Priyanka’s arm on his shoulder, an older brother leaning on a younger sister for support—another reason for those already so inclined to clamour for her entry into active politics.

While I was comfortably—if sometime irritably— ensconced in the TV studio for over three days, my colleague at Open, Mihir Srivastava was wandering through Banaras as the results came in. He was there to see how people who were not talking heads were reacting to the verdict.

The Pappu Tea Shop near Assi Ghat is one of the places in this town where local party leaders and workers, apart from traders, teachers, scholars and journalists, gather to chat over tea and samosas. On the day the results are being announced, a small portable TV set mounted on a wall at the far end of a small rectangular room displays the latest tally, the voice set on mute to take care of the talking heads. A few comments add up to all that the studios will expound on over the day and newspapers over the week.

Dr Saroj Yadav, a poet and writer, refers to Rahul Gandhi as he recites: “Aapke apney daat gandey they, magar chaurahe par manjan bechne nikal pade” (your own teeth were dirty and yet you set out to sell toothpaste ).

Even Mayawati’s opponents credit her with ending the so-called Goonda Raj. The joke (even if not everyone considers it one) is that UP under Mayawati had only one mafia leader, and that was she herself. Apprehensions about the SP’s past are voiced, but now many hope things will be different with Akhilesh Yadav talking tough on law and order. The party’s single gesture of refusing a ticket to gangster DP Yadav, despite the misgivings of senior party leaders, has done more than a hundred assertions at election rallies could.

“In the last election, Muslims were angry with the SP not because of the eviction of Azam Khan (the Muslim leader who was shunted out of the party on account of his differences with the then party general secretary Amar Singh), but because of the inclusion of Kalyan Singh (former BJP Chief Minister who presided over the Babri Masjid demolition),” says Shamsul Rfin, a sari trader in his fifties. People in his neighbourhood are not dismissive of Mayawati and many acknowledge that some good development work took place under her. The reason for her debacle, say many Muslims, is that her attention was diverted to setting up parks and erecting statues, particularly in the latter part of her tenure. Had she spent the same money and energy on housing and welfare initiatives for the downtrodden, she would have done better. “Only certain Brahmins made large sums of money in her tenure, not Dalits,” says Rfin.

Pramod Maji has four boats and is an ardent supporter of the Congress. He dabbled with the SP before he joined the Congress party. It was a mistake, he now feels. According to him, it is important to have political affiliations. It brings little benefit, but saves one from harassment at the hands of government functionaries.

Laksham Yadav is a 65-years-old government contractor who comes to bathe in the Ganga every morning. He did not get many contracts during Mayawati’s regime, but things are likely to change now. “I have no political affiliations,” he clarifies, but the ‘Yadav’ surname always helps when the SP is in power.

This is no less, and perhaps more than what we managed to discuss in the TV studio over 100 hours. Often, the hours are filled with nothing, which is perhaps why most political parties have spokespersons, and Times Now had 14 of us in the studio. It says something about our polity that almost all these spokespersons are lawyers, their task largely to defend mistakes committed by their respective parties or leaders. In an atmosphere fostered by Arnab Goswami, where everything is combative, every statement is to be challenged, and everyone’s view confronted, they have reduced their approach to a simple strategy. Any question directed at a Congress spokesperson is reduced to the ‘communal approach of the BJP’, and questions asked of the BJP spokesperson are converted into comments on the ‘inability of Rahul Gandhi to garner votes’.

As soon as the spokespersons make an appearance, I switch off in the studio, and only the fear of being caught napping on camera keeps me upright. Only on two occasions did I actually listen to what was being said: both, for whatever reason, were when Manu Abhishek Singhvi was speaking for the Congress.

Once was when he stopped Arnab in his tracks: “This is a serious debate. At least give me minute to make my point.” The other was when he was candid, which is rare for a spokesperson: “The Punjab results have left me baffled.”

Television then is theatre, where the best moments have little to do with substance.

Derek O’ Brien’s irritation with Arnab is more than evident in his new role as Trinamool Congress spokesperson. He stumbles a little each time he refers to Mamatadi, but stops Arnab in the middle of a question referring to the Trinamool’s arrogance.

Derek: “I would prefer if you do not use emotive words such as ‘arrogance’, I would rather talk on facts.”

Arnab: “What would you prefer? Obdurate, imperious, obstreperous?”

In such an atmosphere, the best bet for some sense rather than entertainment on news TV remain people who have a long-term association with the area where the election has taken place, but they are the least likely to find place in a Delhi studio. In our 100 hours on air, perhaps the man who made most sense to me among the 14 experts seated in the studio, ranging from academics and well-known political commentators, was Shesh Narain Singh, political editor of Deshbandhu. The day we first sat down, he said the SP will get 220 seats and gave us cogent reasons for it. I didn’t believe him then, but he didn’t have to say ‘I told you so’ once the results were out.