‘PM, Chidambaram: Law unto Themselves’

Amaresh Mishra, handpicked by Digvijaya Singh to lead Congress’ anti-communal front, has accused Manmohan Singh and P Chidambaram of creating a ‘mindset of terror’ in the party. 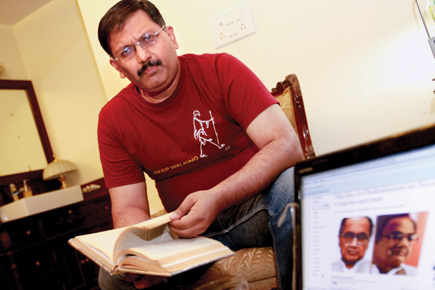 Amaresh Mishra accuses Manmohan Singh and P Chidambaram of creating a ‘mindset of terror’ in the party.


Amaresh Mishra accuses Manmohan Singh and P Chidambaram of creating a ‘mindset of terror’ in the party.

Amaresh Mishra has been handpicked by Congress General Secretary Digvijaya Singh to head the party’s Anti-Communal Front. Amaresh, who? The man who accompanied Digvijaya on his controversial trip to Azamgarh, and also the man Digvijaya took along to meet P Chidambaram and Sonia Gandhi to discuss Naxalism and the Batla House encounter in Delhi.

Amaresh Mishra is also an outspoken Congressman. ‘The Home Ministry… is bent upon exaggerating the threat—so that a blind, fascist assault oriented policy against the tribal population can replace Sonia Gandhi’s social liberalism,’ he wrote recently, asking, ‘Why then shouldn’t the Dantewada massacre be seen as a set-up by powerful anti-liberal lobbies mainly outside but also within the Congress to massively dent the progressive politics of the Congress President?’

For good measure, Mishra has also authored an article in Milli Gazette on the 26/11 attacks, titled, ‘Headley Saga: Mumbai attack was a joint IB-CIA-Mossad-RSS-project.’

While it is no secret that many Congressmen wanted to hear Digvijaya Singh’s views as post-Dantewada resentment peaked against Home Minister P Chidambaram’s ‘law and order approach’ to the Maoist insurgency, none could have expected the extent to which one of Singh’s aides would try to stretch his viewpoint. That too, an aide who is arguably his chief amplifier in north India—someone who portrays himself as a ‘young, new age, 21st century Indian politician’.

Writes Amaresh Mishra, in an article, ‘Dantewada: The Other Side of Truth’: ‘The PMO and the Home Ministry have become almost a law unto themselves. They create a mindset of terror where no one can speak out against their way of tackling India’s ‘Enemy No 1’ (Maoists).’ This was posted on a portal four days before Digvijaya Singh’s write-up in a business daily appeared on 14 April, criticising Chidambaram for treating Maoism ‘purely as a law and order problem without taking into consideration the issues that affect the tribals’.

Speaking to Open, explains Mishra, “The Prime Minister and Home Minister have divorced themselves from the political culture of the Congress—99 per cent of Congressmen are not being able to identify themselves with them. It is in this context that I’ve written about the mindset of terror…”

Not even a year has passed since Mishra joined the party, and he is already considered one of Digvijaya Singh’s closest aides. “I joined the Congress in August last year, immediately after the Lok Sabha election which I had contested as an Independent candidate supported by the Ulema Council from Lucknow,” he says, “It was during the election that I came in contact with Digvijaya Singh. Later, he asked me to join the Congress, and I was made the president of the Anti-Communal Front of the AICC.”

By Mishra’s claims, it was he who’d arranged the visit of former Madhya Pradesh CM Digvijaya Singh to Azamgarh a few months ago, and it was the aftermath of this visit that gave them a glimpse of Chidambaram’s alleged ‘arrogance’. “After Digvijaya Singh’s visit, I, along with three other persons from Azamgarh, accompanied him on visits to several party leaders, including Congress President Sonia Gandhi, Law Minister Veerappa Moily and Home Minister P Chidambaram, to present the case of the boys from Azamgarh,” he says, “Our meeting with the Home Minister took place on 16 March. He appeared so insensitive to the issue that I almost had a verbal confrontation with him.”

Mishra points out that while Veerappa Moily received the delegation very warmly, Chidambaram was overbearing and snappy, and the tension between him and Digvijaya Singh was clear. “Even as Singh passionately pleaded the necessity of expediting trials of the youth from Azamgarh, the Home Minister was firm that they were dreaded terrorists and could not be taken lightly. Only after we had a verbal duel did Chidambaram agree to seek an opinion from the Law Ministry on the technicality of setting up a fast track court. Till date, he has done nothing in that direction,” says Mishra, pointing at reasons that might have led to Digvijaya Singh’s flare up.

In his own Dantewada article, Mishra makes a distinction between ‘the Left liberal space’ within the Congress represented by leaders like Sonia Gandhi, Rahul Gandhi and Digvijaya Singh, and the ‘rightist, exclusivist’ space occupied by Manmohan Singh and Chidambaram—whose tactics have ‘constricted liberal space.’ An opportunity to deal effectively with Maoists, he goes on to suggest, has been squandered mainly because of the hardline stance of the two leaders.

‘Imagine a situation where Digvijaya Singh’s social liberal, pro-tribal line on Maoism would have been pursued—liberals would have stood up for the Government,’ Mishra writes. Further, he sees the Government’s approach to Maoists as part of a larger conspiracy from “a powerful lobby within UPA II” against Sonia and Rahul Gandhi. ‘The question is: who benefits from all this? Clearly, not Sonia or Rahul Gandhi, or the secular-liberal section within and outside the Congress.’

When asked to shed more light on this lobby, he says, “The time has not come to take names. The only thing I can say at the moment is that these are the same people who created a basis for the penetration of the US and Israel into India.”

To Digvijaya’s protégé, it’s a battle between ‘techno-bureaucrats who represent multinational lobbies and corporate interests, and hardboiled politicians like Digvijaya Singh, Ashok Gehlot, Vilasrao Deshmukh, Veerappa Moily’ who are sensitive to the concerns of the underprivileged, especially tribals and minorities.

Congressmen who are aware of the association between Amaresh Mishra and Digvijaya Singh even see the former’s imprint on the latter’s 14 April piece that set the party aflutter.

Mishra, however, does not agree with that assessment. “Digvijaya Singh is a left-of-centre leader of the Congress. He is a well-read man, having extraordinary political instinct. It is also true, though, that when two persons interact on so many issues, they tend to leave an influence on each other.” The modesty of understatement?