The absurdity of India’s fight against the Maoist insurgency 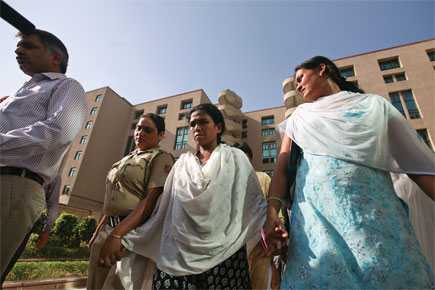 The absurdity of India’s fight against the Maoist insurgency


NEW DELHI ~ Early on 3 October, a truckload of police personnel landed at the house of Jaipur-based civil rights activist Kavita Srivastava. The personnel were from four local police stations, led by a police team from Chhattisgarh. They were acting on inputs from Central intelligence agencies that a woman accused of being a Maoist was in hiding at Srivastava’s house. Apart from the house, the police also raided the local office of the People’s Union for Civil Liberties (PUCL), of which Srivastava is secretary. Of course, they found nothing. Srivastava was not at home, and in her absence, her 82-year-old father, who has a serious heart ailment, was allegedly manhandled. They also harassed and intimidated the family’s two domestic helps who are from West Bengal, since they might have seemed to fit their description of tribal Maoists.

‘When my sister asked why so much police had come, they said “Naxal mamla hai (It’s a Naxal issue),’” Srivastava has said in a written statement. She claimed that she is being targeted since she has been vocal about human rights violations in Chhattisgarh and elsewhere. In another statement, the PUCL termed the raid ‘a wholly reprehensible act of targeting of human rights activists as well as a totally unacceptable attack on civil liberties’.

The alleged Maoist who the police were after was arrested a day later from a bus stop in South Delhi. Now, who exactly is this Maoist for whom a truckload of police personnel was sent just to arrest her? A woman named Soni Sori. A 36-year-old former primary school teacher in Chhattisgarh’s Dantewada district, she has been on the run since last month.

The State, however, sees something sinister in her. Yet, there is good reason to believe that the stories in circulation about her are a complex web of lies and falsehood systematically spread over the past two years by the state machinery. And she is not the only one whose life has been put at stake.Her entire family has become a victim of this witch hunt. In July 2010, warrants were first issued against Soni, along with her husband and nephew, for an attack on a local Congress leader, Avdesh Gautam. In the attack, Gautam was not hurt but his son was injured. After the incident, Soni Sori’s husband was arrested immediately, but for some reason she was not. She continued to work at her school, though the police claims she has been absconding. Her arrest now is ironic. Consider this: in June this year, Maoists attacked her house and put a bullet through her father Madru Ram Sori’s leg as a warning not to help the police. With the help of their supporters, Maoists also ransacked the whole house, even looting some valuables. Madru Ram Sori is still in a hospital in Jagdalpur, where he has repeatedly told authorities that the government should once and for all put his family out of misery by killing them all.

Soni’s nephew 25-year-old Lingaram Kodopi’s case is even more tragic. In 2009, he was asked by local Maoists to join their fold, which he refused. Soon afterwards, he was approached by the police to join them as a special police officer (SPO) to fight Maoists, and when he refused that, he was brutally tortured and locked inside a shabby toilet for 40 days. He was released after an activist filed a habeas corpus petition in court. After this brush with the police, Kodopi managed to flee Chhattisgarh and enrolled in a journalism school in a Delhi suburb, where he pursued a diploma course.

In July 2010, after senior Maoist leader Cherukuri Rajkumar alias Azad was gunned down in an apparent fake encounter, the Chhattisgarh police claimed that Kodopi had been chosen by Maoists as a successor to Azad. They alleged that Kodopi was a senior Maoist commander who had received arms training in Delhi and Gujarat. They backed out later after a hue and cry raised by media and human rights groups. At a press conference in Delhi, Kodopi recounted his bitter experiences both with the state and Maoists.

After finishing his diploma, Kodopi, against the advice of many in Delhi, decided to return to his home and, as a journalist, chronicle the lives of his people caught in the war between Maoists and the State. He shot videos of police atrocities in Morpalli, Tarmetla and Timmapuram villages of Dantewada in March this year and put them up on YouTube. Instead of taking up job offers that came his way in Delhi, Kodopi chose to return to his native place and work there. Last month, he was arrested by the Chhattisgarh police on charges of facilitating protection money for Maoists from Essar Steel. In the same case, his aunt Soni Sori was made an accomplice. Incidentally, the day she was supposed to have accompanied her nephew to pick up extortion money from Essar, she had apparently gone to a police station with an application for compensation for the losses her family had incurred. After Kodopi was arrested (the family says he was picked up from his home in Palnar village), Sori Soni continued to evade the cops, hiding in jungles for the most part. The police kept at her heels, and she missed a police bullet by a whisker more than once. Her house was under constant watch, and it is not clear how she managed to reach Delhi from Chhattisgarh.

On 4 October, Soni Sori was produced in a Delhi court. She has been charged under the same sections of law that Kodopi was booked under, or before him activist Binayak Sen. The latter’s case is a glaring example of how long a person may have to serve a prison term, even on very little evidence and in spite of international condemnation of his arrest and subsequent sentence. In Sori’s case, it is clear that the Chhattisgarh police want to take custody of her on remand, and that she may have to spend a lot of time in jail.

Sori Soni has alleged that the police was ready to bail out her husband on the condition that she testifies against Kodopi, saying he travelled to places like Andhra Pradesh and Gujarat. It is perhaps because of this refusal that she is in jail today. In George Orwell’s classic 1984, a character called Julia tells her lover Winston Smith: “They threaten you with something—something you can’t stand up to, can’t even think about. And then you say, ‘Don’t do it to me, do it to somebody else.’” This is beginning to look more like a scene in Chhattisgarh than Orwell’s imaginary Oceania.