The world’s biggest defence deal could come through soon. However, the US seems determined to change the rules midway. 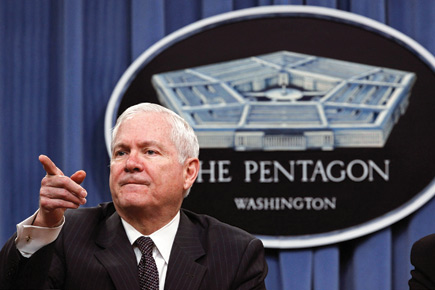 The world’s biggest defence deal could come through soon. But the US seems determined to change the rules midway.


At $12 billion, this is the biggest defence deal in the world. Ranged against each other are six of the world’s best fighter aircraft—the Russian MiG-35, American F-16 and F-18, Sweden’s Gripen, French Rafale and the European consortium EADS’s Eurofighter Typhoon—as the Indian Air Force (IAF) closes in on choosing 126 medium multi-role combat aircraft through a global tender. But the US, keen on altering the rules of the game, is pressuring India to forgo the tendering process and instead go in for a single-vendor deal under what it terms a ‘foreign military sale’ (FMS), leaving India to choose only between the F-16 and F-18.

It was in 2008, when bids were first submitted, that the US Defense Secretary Robert Gates had first written to India’s Ministry of Defence, suggesting such a course. Now Vice Admiral Jeffrey A Wieringa, director of the US Defense Security Cooperation Agency, has again written to the Ministry. Significantly, this is the first time that the US has responded to a global tender for an Indian defence deal. And its preference for the FMS route is more than obvious, unlike the Soviets earlier or Russians now, who, despite being India’s largest suppliers through its history, have never insisted on such strings attached.

An FMS would involve a government-to-government agreement on a contract without an open tender, which would ease the transfer of critical technologies, thus hastening the process. The flip side is that it is bound to raise expenses, which would obviate the entire rationale of a global tender which allows for open trials to meet the IAF’s requirements. Apart from restricting choices, such a deal would also let the US dictate a set of other terms, under a maintenance and usage clause, in contrast with the current scenario in which any supplier selected will have to meet terms of the tender as specified by India.

In his letter to the Ministry last month, Wieringa is said to have pitched hard for the 126-fighter deal—trials for which are in full swing, though delayed by a month. Four of the six aircraft in contention have completed their three-phase trials, while two are still undergoing them (likely to be done by the end of next month).

The Ministry has received letters from government representatives on behalf of other aircraft in the fray as well, but South Block is understood to have turned down these requests, preferring to adhere strictly to the transparency clause of the Defence Procurement Procedure.

Remember how the Comptroller and Auditor General (Cag) had raised the issue of US restrictions on offensive deployment of the landing platform dock ship USS Trenton, bought earlier by the Indian Navy? The Cag questioned India’s acquiescence to a US directive on inventory inspection of all articles transferred under the ‘end user monitoring’ clause, and the Left had slammed the Government for the clause’s figuring in the Trenton deal. Now the clause assumes heightened importance, given all the big ticket deals in the pipeline right now.

America’s end user monitoring mechanisms, which call for the regular physical inspection of military supplies by the US government, have been a sticking point in several Indo-US defence deals in the past as well. In June last year, it took many rounds of hard negotiation to sort out the monitoring of Boeing Business Jets procured by India for the use of the President and PM. The clause finally agreed upon by the National Security Advisor enables the US to inspect these VVIP aircraft once a year.

But this one-time agreement was not enough to sort out issues with monitoring in general. Vice Admiral Wieringa had played an important role last year when the mechanism had hit a roadblock; once a draft of the clause sent by Washington was rejected by the Ministry for infringing Indian sovereignty, he proposed that sample versions of text signed by the US with other countries be made available to South Block, for reference. Mutually agreed changes were made before the clause was finally signed by both countries last year during US Secretary of State Hillary Clinton’s visit to India.

On an average, India’s defence deals with Russia are worth an estimated $1.5 billion annually, and with Israel, about $1 billion. With the US, India has done defence business worth only $4 billion over the past eight years. But that figure could spike sharply upwards.